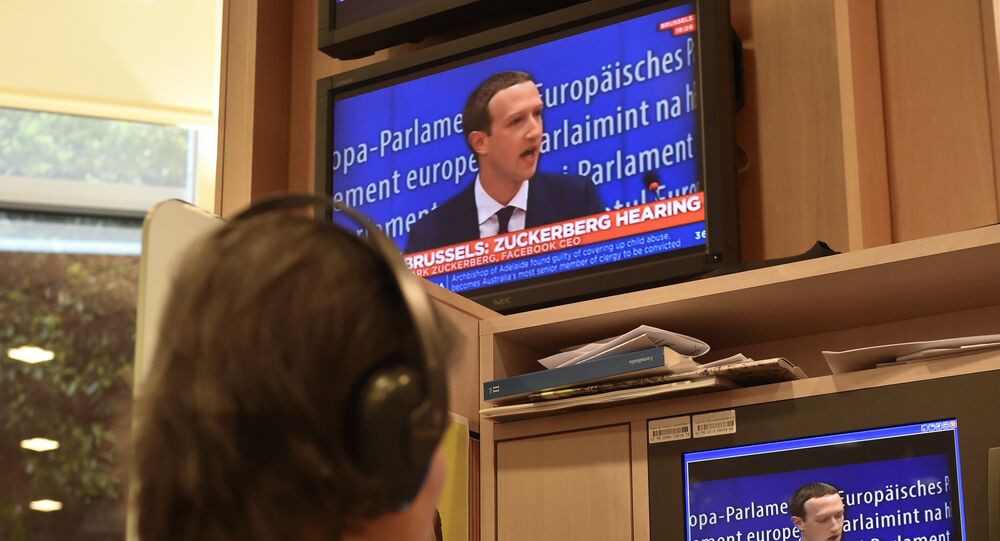 EU lawmaker Guy Verhofstadt has told Facebook CEO Mark Zuckerberg that he may be remembered as "a genius who created a digital monster." The MEP made the remark at a hearing over a massive Facebook data leak affecting millions of users. Digital communications specialist Dr. Amy Binns told Sputnik she was disappointed about the hearing's format.

Sputnik: What are your thoughts about Mr. Zuckerberg's hearing at the European Parliament?

Amy Binns: It was really a very odd format, and one that the Europeans use a great deal, which is that everybody on the panel gets to ask all their questions. [This] means a whole hour of the 90 minute session is taken up with the politicians asking questions one after another, and only then is Mr. Zuckerberg supposed to reply to all the questions at once. So there was only 30 minutes for him to answer all the questions he had been asked in 60 minutes.

© AP Photo / Marcio José Sánchez
European Lawmakers Disappointed at Facebook CEO's Testimony
Now obviously there is no way he can answer all of the questions, and it's a format that allows him to choose which questions he wants to answer; so of course he's going to pick the easy ones. Really it was up to the European Parliament, to the politicians, to pick a better format than this, because this was never going to go well in my opinion.

Sputnik: Are we going to get answers from Mr. Zuckerberg at some later date? How do you think this situation is going to develop?

Amy Binns: He agreed to provide written answers to the questions he hadn't had time to answer. But Facebook is very good at preparing press releases that really don't say very much. So I think this is a missed opportunity. I don't think we're going to get much more that is interesting or definite from Mr. Zuckerberg on this.

Sputnik: So they wasted this opportunity. A lot of questions remain unanswered and unclear. Do you think we're going to see any kind of legal response, something in the way of legislature?

Amy Binns: I think one of the most interesting points is what [Belgian EU lawmaker] Guy Verhofstadt said – that he thinks Facebook is a monopoly. And if it is a monopoly, it could be illegal under the terms of European antitrust legislation. That's interesting because American politicians have been saying something very similar – that they think Facebook is in breach of their laws on monopolies.

So what we've got now is both Europe and America saying quite similar things – that Facebook now is just too big. It's not just Facebook; it's also [Facebook-owned] Whatsapp and Instagram and the messenger service you might have on your phone.

© Sputnik
Facebook CEO Vows to Provide Special Tool to Clear Browsing History
If Facebook owns all those things, essentially it owns too big a share of the social media market, and in that case [the question arises of] should it actually be broken up? Should they not be allowed to own Whatsapp anymore for instance? Or maybe they shouldn't be allowed to share data, [as in] if you sign up on Whatsapp and you sign up on Facebook, maybe your profile should not be linked by the company.

If Mark Zuckerberg was forced to break up his empire, that would be a major change. We're still quick a long way off that. But it's interesting that Guy Verhofstadt brought that up.

© AFP 2020 / John Thys
Global activists of Avaaz, set up cardboard cutouts of Facebook chief Mark Zuckerberg, on which is written "Fix Fakebook", in front of the European Union headquarters in Brussels, on May 22, 2018, as they call attention to what the groups says are hundreds of millions of fake accounts still spreading disinformation on Facebook.

Sputnik: It was also brought up at the hearing that in the past several years, Zuckerberg has apologized at least fifteen times for terrible things that have happened – for breaches of all kinds of laws, rights, and the like, but that still people continue to use Facebook. So would government regulation even really make a difference?

Amy Binns: I think in a way he's providing a service that is so useful that it's not really going to disappear. The 'Delete Facebook' movement, maybe you remember that from a few weeks ago? It was just a tiny blip. That's the thing, it's so convenient. And it's so convenient in so many ways because we've lost the things we used to have.

© CC0
Cambridge Analytica Scandal Aftermath: Some Started to Use Facebook Less Often - Survey
So for instance you used to have maybe a physical address book with phone numbers of all your friends. Nobody has that anymore; we don't need it. If you meet somebody new, you don't have to ask them for their phone number. You just ask them if they're on Facebook and you'll find them later. If you've got a small business, you don't have to pay for advertising in the Yellow Pages anymore; you just take out a page on Facebook, or set up a little group on Facebook for your organization, and it's free.

So because it's providing really such a useful and cheap service, I'm not really sure that government regulation is going to stop people from using it; because it has replaced so many things that we can't really get back. People aren't going to start paying for advertising in the Yellow Pages anymore, and if we don't have the Yellow Pages anymore then we need Facebook. It's the only thing left.

Dr. Amy Binns is a senior lecturer in journalism and digital communication at the University of Central Lancashire. The views and opinions expressed by Dr. Binns are those of the expert and do not necessarily reflect those of Sputnik.