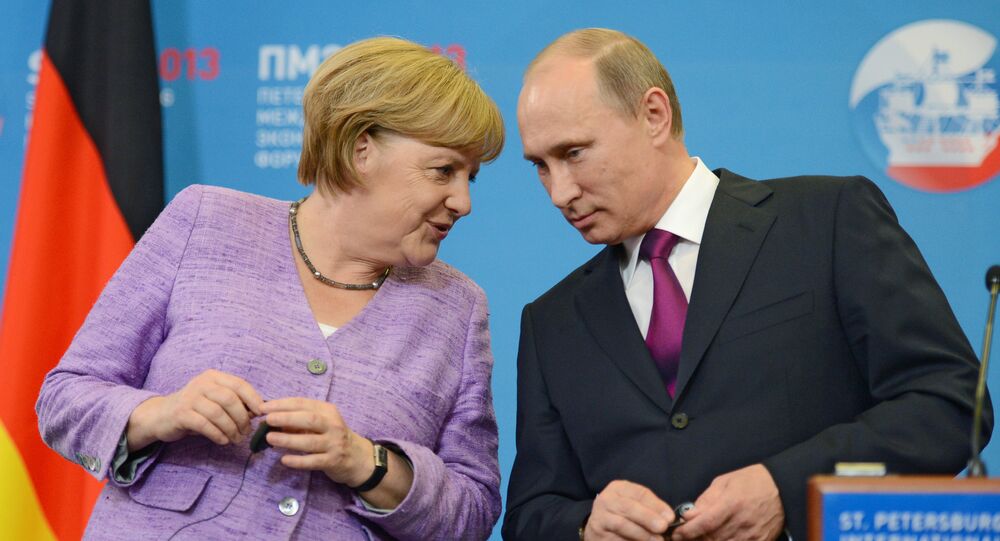 EU Turns Toward Russia as Trans-Atlantic Union Bursting at Seams

European countries are turning to Russia as an ally in their confrontation with Washington over Donald Trump's tariff measures and sanctions spree against Moscow and Tehran. In this context German Chancellor Angela Merkel's visit has marked a potential thaw in EU-Russia relations.

Russia has apparently emerged as a potential EU strategic partner, as the bloc is seeking ways to resist US President Donald Trump's trade policies and Washington's unilateral withdrawal from the 2015 Joint Comprehensive Plan of Action (JCPOA), commonly known as the Iran nuclear deal.

German Chancellor Angela Merkel's May 18 meeting with President Vladimir Putin in the Black Sea resort city of Sochi has come as a signal of a potential thaw in relations between Moscow and the EU following the bloc's introduction of anti-Russia sanctions over Crimea's reunification with the state in 2014.

"We spoke about the difficult situation amid the US withdrawal from the Iranian nuclear deal. Germany, the United Kingdom, France and all our colleagues in the European Union are supporting this agreement and we are going to continue to abide by it in the future," Merkel told a joint press conference.

© AP Photo / Evan Vucci
Merkel on Iran Deal: We Experienced Setback in EU Relations With US
During the Sochi summit Merkel and Putin not only reiterated their commitment to the JCPOA, but also signaled their determination to further implement the Nord Stream 2 project and deepen business ties between the countries.

"Moscow and Berlin have more and more reasons for rapprochement," notes Sputnik contributor Natalia Dembinskaya. "The main issue is the fatigue caused by endless sanctions which impede business operations. That is why bilateral economic relations came to the forefront."

Germany is one of the most important trade and economic partners of Russia, second only to China. Russia supplies a third of Germany's natural gas and oil demands. In 2017 the trade turnover between the countries increased by almost 25 percent for the first time since 2014.

Besides the introduction of additional tariffs on steel and aluminum imports in March by the US president, Trump's anti-Russia sanctions spree hit European and Germany's businesses. Washington's April restrictions against some of Russian individuals and companies such as carmaker GAZ and aluminum group Rusal were specifically painful for the Germans, as they have been closely cooperating with the firms.

© CC0
Treasury Extends Deadline for Investors to Divest Holdings in Sanctioned Rusal, En+
On April 23, however, the Treasury Department extended the "wind-down" period for Rusal — businessman Oleg Deripaska's asset. Treasury Secretary Steven Mnuchin signaled that the restriction would go into effect if Deripaska, included on Trump's sanctions list, does not relinquish control of the company. Since then the company's fate has been hanging in the balance.

Trump's May 8 decision to exit the Iran nuclear deal and resume sanctions against Tehran, most notably its petroleum sector, has become the final straw for the EU bloc.

"The West as we once knew it no longer exists. Our relationship to the United States cannot currently be called a friendship and can hardly be referred to as a partnership," Klaus Brinkbaumer of Der Spiegel noted in his May 11 op-ed.

The same day, James Traub, a fellow at the Center on International Cooperation, noted that although "the partnership with America had a long and fruitful life — Europe is ready to start over," in an article with the eloquent title "RIP the Trans-Atlantic Alliance, 1945-2018."

While Russia and Germany continue to implement the Nord Stream 2 project with Putin assuring Berlin that the new pipeline would not automatically lead to the suspension of gas transit through Ukraine, Bulgaria hinted that it is interested in a direct natural gas pipeline route from Russia.

"As for the supplies from Russia, Bulgaria needs drop shipment of the gas through the Black Sea. Let's call it 'Bulgarian Stream,'" Bulgarian President Rumen Radev told Russian daily Kommersant on Monday.

While the country's authorities are planning to rely on the Turkish Stream, which is currently under construction, Radev opined that the "Bulgarian Stream" idea is motivated by common sense, energy efficiency and security and does not differ much from Berlin's desire to implement Nord Stream 2.

Meanwhile, European countries are mulling over "concrete decisions" to counter Trump's economic policies: On May 17, European Commission President Jean-Claude Juncker announced that Brussels was "launching the process to activate the 'blocking statute' from 1996."

For his part, French Finance Minister Bruno Le Maire proposed three measures to tackle the existing challenges: activate the "blocking statute," exit the US-controlled SWIFT and set up "an independent financial instrument to allow our companies to freely work where Europe deems fit" through the European Investment Bank.

Meanwhile, it was reported that diplomats from Germany, France, Britain, Russia and China, are due to meet in Vienna this week to discuss the future of the Iran nuclear deal, purportedly leaving the US out in the cold. The four states have signaled their willingness to adhere to the JPCOA provisions and keep the deal alive. For its part Tehran confirmed that if the P4+1 remain committed to the agreement it would continue to fulfill its obligations.