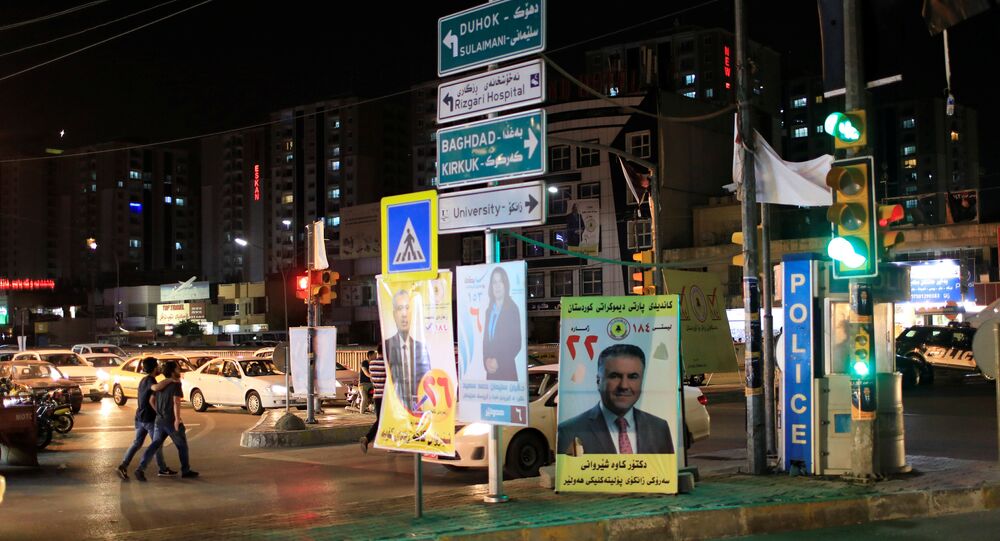 Ex-Pentagon Adviser: Iraqi Citizens Voted for Independence From US, Iran

WASHINGTON (Sputnik) - The Iraqi electorate voted to declare their independence from the United States and Iran in an election outcome that took US intelligence by surprise, former Department of Defense analyst Lt. Col. Karen Kwiatkowski told Sputnik.

"The message we can take from this 2018 election is that Iraq is, to the extent that Iraqis are participating in parliamentary elections, declaring their independence from the US, and also from Iranian influence," Kwiatkowski said.

In a 329 member parliament, none of these alliances will rule without joining forces with other parties and political leaders, she commented.

"We can take this election as a sign that the Iraqis realize that nation-building is their job alone and they are starting to do it themselves," Kwiatkowski said.

© REUTERS / Abdullah Dhiaa al-Deen
Sadr’s Win in Iraq Vote Gives Saudis Chance to Power in Baghdad - Ex-US Envoy
The results of the election would have a significant effect on the long-term US strategy trying to dominate Iraq to access its oil reserves and to use it to threaten neighboring nations, Kwiatkowski predicted.

"Washington's long-term policy in Iraq of facilitating oil extraction by US companies and placement of forward operating bases from which to threaten Iran and Syria, and protect Saudi Arabia and Israel may indeed be impacted by this new Iraqi parliament," she said.

Parties that the United States had supported or worked with were decisively eclipsed in the election, Kwiatkowski pointed out.

"Nouri al-Maliki and the State of Law coalition lost 67 seats, retaining only 25, and the US supported incumbent… came in a weak third with a new coalition that included the INC [Iraqi National Congress], [Ahmed] Chalabi's old party," she said.

The emergence of the Communist Party as part of the leading coalition is just one sign that the US dominated status quo in Iraq will be changing, Kwiatkowski predicted.

US intelligence did not predict or anticipate the success of al-Sadr's populist-nationalist-government crime busting alliance, Kwiatkowski noted.

© AP Photo / Karim Kadim
What You Need to Know About Parliamentary Election in Iraq
"These aspects taken together indicate that the US military (in lily-pad bases away from Iraq populations) and the military-intelligence-diplomatic corps ensconced in the largest US embassy ever constructed (in the Green Zone co-located with the Iraqi parliament) is as out of the political loop in Iraq as it ever was," she said.

Muktada al-Sadr had long anti-American credibility and his election could be a sign of a freshening of Iraqi nationalism and an end to sectarian cronyism from Baghdad, Kwiatkowski remarked.

The outcome of the election could lead to "new public attacks on government corruption, more discussion of economic justice (sharing the oil proceeds with the people of Iraq), and increased use of the tactics… to shape Iraqi politics and activate or energize average Iraqis, who are exhausted and impoverished," Kwiatkowski said.

The Kurdish areas of Iraq did not participate fully in the election and resolving the more heavily Israeli and US influenced Kurdish region, and their oil export activity would present a challenge of statesmanship for the new parliament and future Iraqi government, Kwiatkowski emphasized.

The turnout for the elections was low at just over 44 percent and the winning alliances were all new since the 2014 elections, indicating churn and dissatisfaction in Iraqi parliamentary politics, Kwiatkowski stated.

The new Iraqi parliament would have more options and space as oil prices continued to increase, Kwiatkowski added.

"Iraq's oil income will serve the new parliament well and the leading alliances might be able to demonstrate their campaign slogans sooner rather than later," she said.

"[This] new parliament, and… the prime minister it settles on, will be less beholden to US desires and edicts," she said.

Kwiatkowski discounted the likely that the Trump administration would seek to intervene to overturn or seriously challenge the results of the election.

"There is no appetite in Washington, or the United States as a whole, for renewed interference in Iraqi politics. However, any rooting out of government corruption and cronyism, if this goal is pursued by Iraq's new parliament, may indict US interests," she said.

Any changes in Iraq's relations with her immediate neighbors Turkey, Iran, Syria, Saudi Arabia and Kuwait would still be closely watched by Washington, Kwiatkowski added.