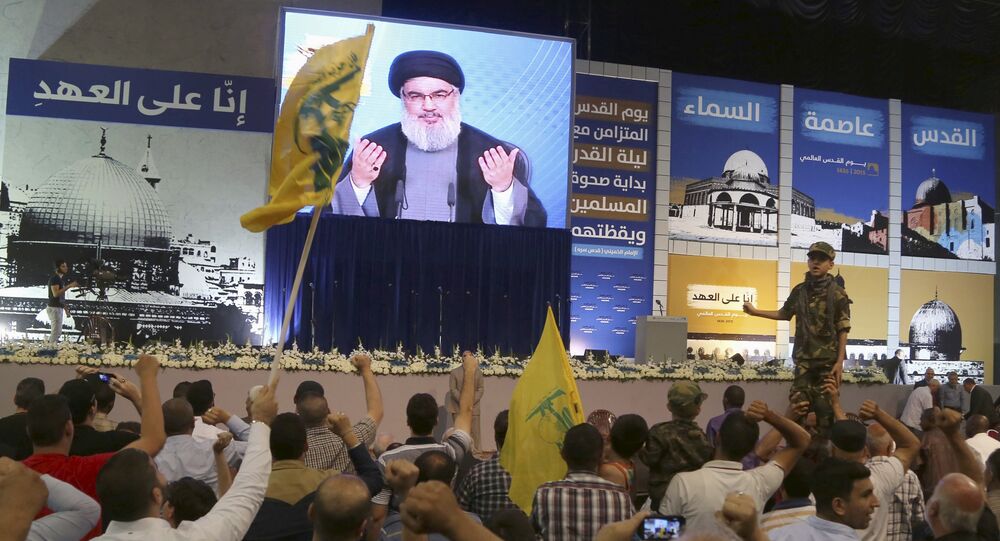 The White House is not happy with Hezbollah’s recent victory in the Lebanese parliamentary elections, former Lebanese Foreign Minister Adnan Mansur told Sputnik, commenting on new sanctions imposed by the US against the movement. According to Mansur, Washington's move, supported by the Gulf States, won't affect Lebanon's political course.

By imposing sanctions against the Hezbollah movement's members, Washington has signaled its dissatisfaction with the organization's role at the helm of Lebanon, former Lebanese Foreign Minister Adnan Mansur told Sputnik Arabic.

"The imposition of sanctions against Hezbollah is no news for us," the former foreign minister noted. "Earlier, the leadership of the movement has already been subjected to sanctions, now the US and its allies in the region have 'increased the dosage.' They are signaling this way that they continue to struggle with the movement. However, they have already included it in the list of terrorist organizations, both the military and the political wings."

Mansur pointed out that given this, it is obvious that the movement's members do not have accounts abroad, so in reality the newly-introduced sanctions will not harm them.

© REUTERS / Hasan Abdallah
US Sanctions Against Hezbollah Aim to Meddle in Lebanese Government Formation – Lawmaker
On May 16, the US Treasury Department's Office of Foreign Assets Control (OFAC), in partnership with Saudi Arabia, Bahrain, Kuwait, Oman, Qatar and the United Arab Emirates (UAE), placed sanctions on 10 Hezbollah members, including its top officials, Secretary General Sayyed Hassan Nasrallah and his deputy Naim Qassem, and entities affiliated with the movement.

Earlier in May, the Shiite party Hezbollah and its political allies won the Lebanese parliamentary election, gaining 67 out of 128 seats.

"The introduction of sanctions will not affect the internal situation in Lebanon and the formation of the government," Mansur opined. "People have made their choice, and the country will follow the chosen course. Hezbollah and its allies will be part of the Lebanese government despite any external pressure."

Meanwhile, the May 12 parliamentary elections in Iraq ended up with the win of a Shiite coalition, which some observers regard as yet another win for Iran.

Muqtada al-Sadr's Sairun ranked first in the vote. Iran-backed Hadi al-Amiri's Fatah (Conquest) and Prime Minister Haidar al-Abadi's Nasr alliances came in second and third, respectively. While al-Sadr is due to shape up the next government, some observers predict that he would neither bow to Washington nor to Iran, pursuing an independent strategy and restoring ties with regional Arab States.

To thwart what it calls Iran's Middle Eastern expansion, the White House unilaterally pulled out of the Joint Comprehensive Plan of Action (JCPOA), commonly known as the Iran nuclear deal, and ordered the subsequent resumption of sanctions against Tehran.

Russia, China and European powers, the signatories to the deal, have signaled that they will remain committed to the agreement regardless of the US' withdrawal from the JCPOA.