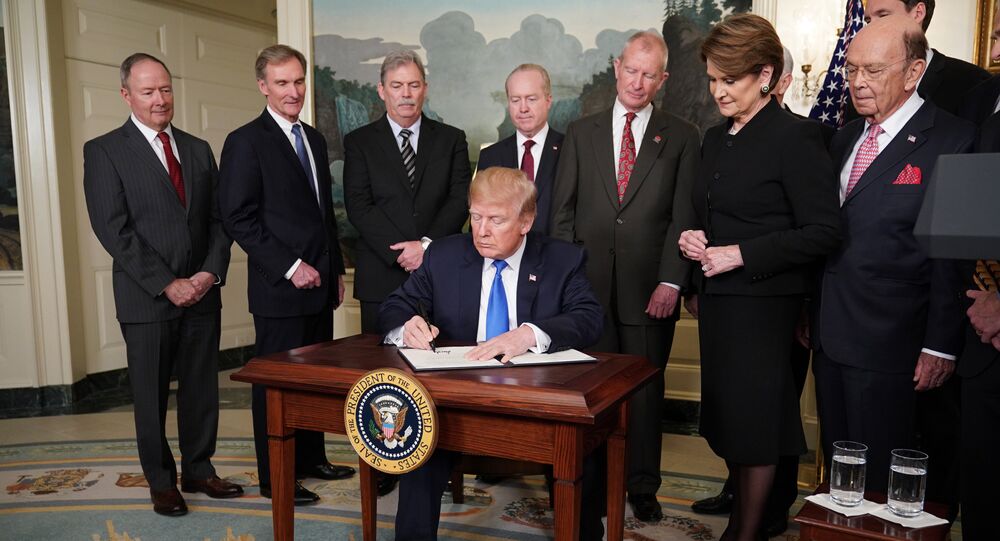 Russian economic observer Maxim Rubchenko reveals the kinds of aces President Xi has up his sleeve to allow him to trump President Trump on trade.

A high-level delegation of Chinese negotiators arrived in Washington on Tuesday for five days of trade talks, reciprocating a US delegation's visit to Beijing at the beginning of May.

Ahead of the negotiations, Deputy Minister of Commerce Liu Xuesong vowed that China would "repulse" Washington's protectionist measures, which he said "caused serious damage to Chinese interests, as well as American manufacturing and American consumers."

© AFP 2021 / NIKLAS HALLE'N
The End of Petrodollar Era? How Trump's Iran Deal Undermines the Dollar
Trump began the trade spat with China in March, slapping Beijing with $60 billion in tariffs, saying that unfair trade practices had cost America 60,000 factories and at least six million jobs. A week later, China fired back, imposing a 25 percent import tariff on one hundred products imported from the US, including automobiles, airplanes, chemicals and agricultural goods. Several weeks later, Washington struck again, hitting Chinese telecommunications giant ZTE with a ban on US components over a seven year period. The US move hit the Chinese tech sector hard and forced ZTE to fold up part of its business and begin layoffs.

"It seemed that the US had a clear advantage in the upcoming Sino-US trade negotiations," Rubchenko wrote. "Therefore, the US delegation, arriving in Beijing on May 3, demanded that Beijing increase the import of American goods to reduce the US trade deficit by at least $200 billion. But the Americans came home empty-handed."

Now, the observer noted, it has become increasingly clear that time is on China's side. "Specifically, the sanctions against ZTE boomeranged and hit American microchip manufacturer Qualcomm. The company has warned of a possible loss of half a billion dollars in revenue after losing its biggest client."

© AFP 2021 / Johannes EISELE
This picture taken on May 3, 2018 shows the ZTE logo on an office building in Shanghai

Moreover, the US tech giant's plans to acquire Danish semiconductor maker NXP are now under threat, since the company needs the approval of the Chinese anti-trust authority for the deal to go through. In late April, the Ministry of Commerce indicated that it would not approve the deal following a preliminary evaluation of the takeover application.

"The subtlety here," Rubchenko noted, "is that there is little time. If the deal does not move forward by July, the Americans will have to give up and pay the Danish company a $2 billion penalty fee."

Given this situation, President Trump has been forced to temper his tone.

"Thus, even before the second round of Sino-US trade talks began, Beijing's position was significantly strengthened," Rubchenko wrote.

Of course, that didn't stop Washington from putting up a bold front. This week, Commerce Secretary Wilbur Ross declared that that the US restrictions  against ZTE have essentially forced China's second largest telecommunications equipment manufacturer to cease its operations, and that this demonstrates China's dependence on American technology.

But in practice, Washington will have to give up its hard-line approach sooner or later, according to the observer.

"In the case of ZTE, we're talking not only about a trade conflict, but also the strategic prospects of the two countries. Beijing's implementation of the 'Made in China 2025' strategy stipulates that, in a seven year period, Chinese companies should become the global leaders in ten key industries, including robotics, biotechnology and artificial intelligence."

© REUTERS / Aly Song
Containers are seen at the Yangshan Deep Water Port, part of the Shanghai Free Trade Zone, in Shanghai, China, February 13, 2017
© AFP 2021 / ROBYN BECK
Trump Urges Twitter Followers on to 'Stay Tuned' Amid Trade Negotiations With China
The government has already allocated tens of billions of dollars towards achieving this goal, including $160 billion for the purchase of Western tech companies. As multiple analysts have suggested, it is the prospect of the US losing its preeminence in the semiconductor industry and the subsequent loss of its global technological edge that's likely driving the trade conflict.

The Chinese, for their part, view the dispute as a confirmation of the importance of Made in China 2025. A recent op-ed in the People's Daily noted that "the global supply chain has become too dependent on politics," adding that "China's technological development must not slow down because of the US. It's time for us to develop our own technologies."

Furthermore, according to Rubchenko, even if Washington succeeds in resolving the conflict with ZTE with minimum losses for Qualcomm, it still leaves other issues unresolved, from American pork, soybeans and wheat, to manufactured goods, which China can purchase from other developed economies, including the Europeans.

Beijing has already started a media and internet campaign calling on citizens to boycott products from American companies like McDonald's, KFC and Apple. Last year, a similar boycott forced South Korea's Lotte Group to close its doors in China following Seoul's decision to allow Washington to place its missile defense systems in the country.

"And China has yet to expand the trade in raw materials in yuan, sell its US securities, or devalue its national currency, which would make imports unprofitable. Washington has nothing of the kind to oppose such an arsenal," Rubchenko concluded.