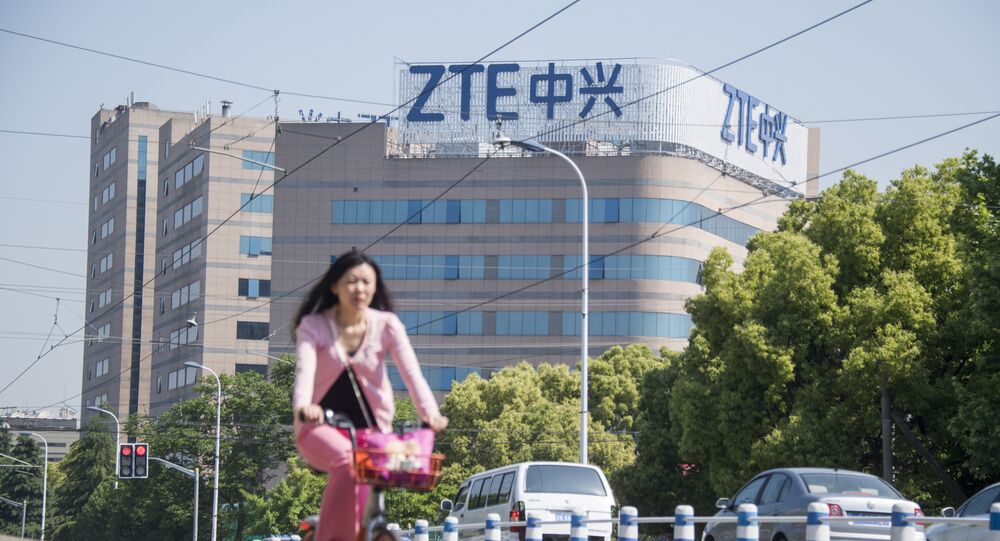 MOSCOW (Sputnik) Tommy Yang - Donald Trump is probably seeking more concessions from China in the ongoing negotiations over trade disputes between the world’s top two economies, by offering to re-evaluate a previous decision from the US Commerce Department that threatened the survival of Chinese telecommunications company ZTE, experts told Sputnik.

Shenzhen-based ZTE had to halt most of its business operations and faced serious challenges of survival after the US Commerce Department decided to ban US companies from selling components to the Chinese telecommunications equipment maker for seven years. ZTE was punished for violating the terms of a settlement deal, because it breached existing US sanctions that prohibited companies from selling goods to Iran and North Korea.

In an abrupt turn of events, Trump tweeted on Sunday that he was working with Chinese President Xi Jinping to try to help ZTE get back into business and had instructed the US Commerce Department to find a solution, citing that ZTE’s closure would cost too many jobs in China. Trump defended his decision further on Monday, saying that ZTE also bought a lot of individual parts from US companies and fell under the larger trade deals both nations were negotiating.

Trump’s surprising announcement about ZTE came two days before Chinese Vice Premier Liu He arrived in the United States to kick off another round of trade talks between the two nations. The first round, which took place in Beijing in early May, failed to produce concrete results.

© AP Photo / Carolyn Kaster
Trump Faith Adviser Who Said Jews Belong in Hell to Take Floor at Jerusalem US Embassy Opening
By softening his position on ZTE, Trump could be trying to secure additional concessions from the Chinese side in the second round of trade talks, Chinese economists suggested.

"Through closed-door negotiations during Liu He’s visit, China could make concessions and offer more benefits to the US side on a wide range of issues [after Trump’s concessions on ZTE]. Such concessions would also be beneficial to the Chinese economy," Hu Xingdou, a professor of economics at the Beijing Institute of Technology, told Sputnik.

Hu believed that if China opened up its financial sector further, it could help both companies and consumers in the country.

"For example, China announced its plans to further open up its banking and insurance services. This could be beneficial to companies in both countries, because monopoly is never good. As competition becomes more intense in this sector, it could also help bring better services to ordinary consumers in China," he said.

Following his harsh rhetoric against China on trade issues in recent months, Trump’s latest decision on ZTE came as a surprise to many, with some analysts arguing it was a sign of the United States caving in. However, Hu argued that Trump was simply a businessman trying to cut a deal and did not have to appear "tough" all the time.

"Trump’s style may not always be appearing hawkish. His typical style is to be a businessman in negotiations, who keeps giving you surprises and be flexible. He could show you his cards in unconventional ways. It’s also easy for him to adapt to changes as long as he sees benefits. He doesn’t have to stay harsh all the time. If [Trump's Democratic opponent] Hillary Clinton became president, she could have held a stronger position because she’s a career politician," the Beijing-based economist said.

Chinese leaders may find it confusing when dealing with a US president like Trump, who has adopted unconventional tactics compared to previous US leaders, China-based US experts suggested.

"My sense is that dealing with Trump seems to confuse them [Chinese leaders], because he’s not like any other US leaders in the past 30 years. He’s more abrasive. He challenges them much more. He has sustained this dispute much longer than most people have typically sustained these types of issues. He seems so far not to be giving in. And he’s constantly changing the narratives of the story. I think that creates confusions for them as to how to handle him. He’s definitely taking them out of their comfort zone," Christopher Balding, an associate professor of business and economics at the Peking University HSBC Business School in Shenzhen, told Sputnik.

Despite Trump’s apparent policy reversal, his influence on how ZTE should be punished was still limited under the US political system, Professor Balding stressed.

© CC BY 2.0 / Kārlis Dambrāns / ZTE
UK Cyber Security Centre Warns Companies Against Using China's ZTE Equipment
"The US government is constructed in a way that the president does not have unfettered control. This [the case against ZTE] is led by the Commerce Department and the Department of Justice. Trump has tweeted this out and everybody says everything has changed now. But it’s important to know that there has not been a chance of official policy yet. Everybody needs to slow down and wait until we actually see something. A tweet is not a policy or a legal agreement," the expert said.

The US expert explained that Trump could influence on the case related to ZTE, only because it was not a US company.

"The president in the US government has incredibly free range to basically set foreign policy. This [case with ZTE] is one of those cases where you can say: is it foreign policy or is it a legal decision? If ZTE is a US company, Trump would be in big trouble and face a lot of legal issues about a US president talking about a US company that has been charged with similar violations. Although it’s not the norm and probably not advisable to change a legal decision, the US government system does give the president has a lot of latitude on how to conduct foreign policy," he said.

The expert noted that Trump is facing a lot of criticism from both the left and the right for his tweet about ZTE, making it difficult for a deal to be struck between the two nations on the fate of the Chinese telecom company.