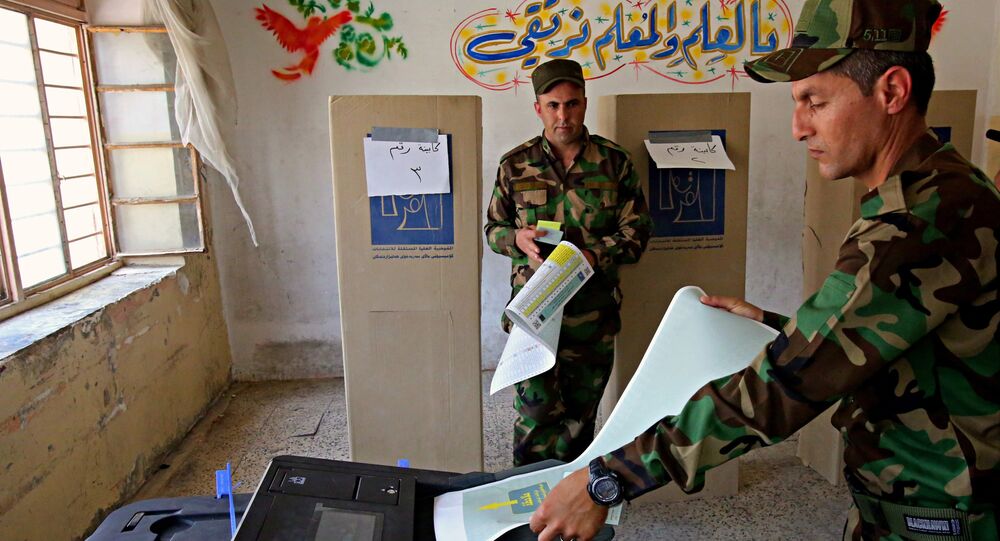 Iraqi journalist and filmmaker Mojtaba Masood sees Iraq's parliamentary elections, set for Saturday, as a breath of fresh political air for the country, with the voters dividing for the first time in years along issue rather that sectarian lines.

​"So, at the moment what we see is that for the first time in a while, Iraq has divided itself in terms of elections, not in terms of sectarian or ethnic ground," he told Radio Sputnik's Loud & Clear hosts Brian Becker and John Kiriakou. "For the first time in a long time we're looking at issue-based subjects between the politicians… if you're looking at Iraq, a lot of its issues are related to the economy and wages, which is quite rare because before we were looking at sectarian parties, and Iraq has moved away from that."

"I think the main game player in Iraq at the moment is probably Haider al-Abadi, and he's been able to form a party referred to as al-Nasr Party, and he's fielded 545 candidates from different parts of Iraq… Shia, Sunni and even Kurdish," he added. Abadi is currently the prime minister of Iraq.

But there's someone else who might also have a chance at pulling off a win.

"I think [al-Abadi is] going to be a main player in this as well as the Fatah Party, which is run by Hadi al-Amiri, who is the leader of the paramilitary forces," Masood told Becker. He also suggested that because of past corruption within the government, "a lot of new faces" are going to be popping up.

When it comes to the new cabinet's commitment to smashing Daesh, the journalist hinted that much actually depends on another administration: that of US President Donald Trump.

"The unity in Iraq was able to defeat ISIS [Daesh] much faster than Syria. The nature of this varies now because of the new Trump administration and the way that Iraq is looked at and the pressure that the US will put on Iraq in terms of their relations with Iran, or forcing them to choose between Iran and the US," Masood observed. "If conflict begins between the US and Iran, that will affect Iraq negatively and we will see the implications of that in Iraq… and there's not much of ISIS left at the moment, but we don't know whether there will be a new ISIS emerging."

"The geopolitics in the region is going to change things," he stressed.

Is Turkey Preparing for New Offensive in Iraq?