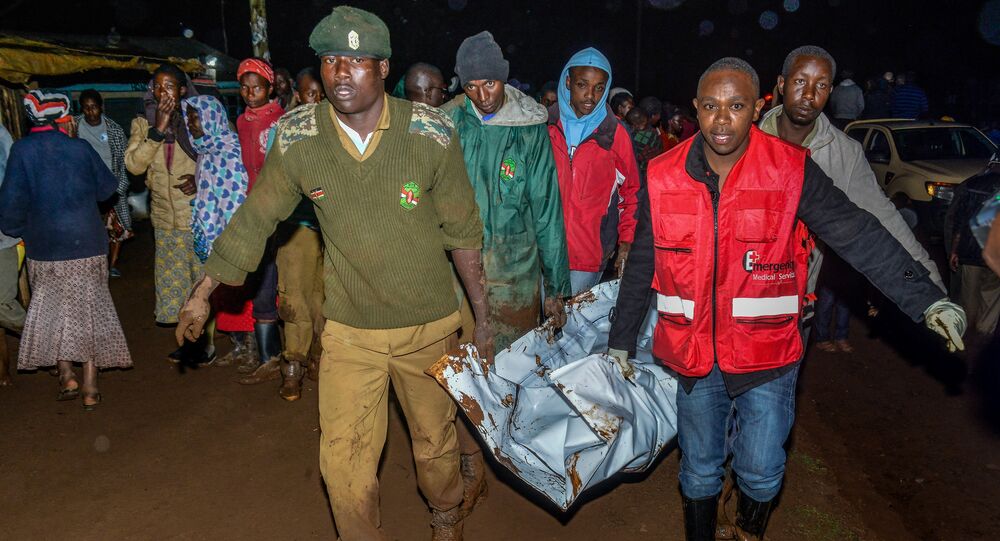 In the Nakuru County of Kenya, a dam has burst, sweeping away a whole village with the silt and water and leaving thousands of residents displaced. The devastation is tangible, and rescue teams are still working to find survivors. Joyce Kimutai, Meteorologist and Climate Scientist at Kenya’s Meteorological Department, explains the damage.

Sputnik: What’s the latest information on the damages caused by the burst Dam?

Joyce Kimutai: The latest reports that we have had at midday (Kenyan time), is that the death toll has risen to 38, and 2500 people are displaced so far.

On the ground, the Kenyan Youth Service and the Kenyan police are leading the rescue operations. The Kenya Red Cross, and the disaster management team of the Nakuru county are also helping in evacuating survivors to hospitals.

There are reports that the PS, (the Public Secretary for Education) has announced the closure of a school in the area. This school is to be closed indefinitely.

Sputnik: Should residents of the Nakuru area be wary of more flooding?

Sputnik: What caused the extent of the damage from the floods?

Joyce Kimutai: For Nakuru county, the flooding has resulted from the swelling of a dam, with reports as yet unconfirmed, it is likely that this dam were not in good condition, or rather, the dams were not well placed. We are not 100% of these reports as of yet however, as we have not yet had confirmation.

Sputnik: Is this flooding typical of the wet season in Kenya?

Joyce Kimutai: The floods of this season have become some of the most exceptional floods that we have seen so far. I can only compare the extent of the water with the 1997 El Nino rains; there really is no other season to compare it to. We are currently doing an attribution study with a group from Oxford University.

We are trying to analyze and look at what could be a cause of this harsh weather. Our current study looks at whether it is impacts of climate change that’s causing this. We want to see if the Indian Ocean or any other ocean is warming, and whether there is an abnormality here that could explain the drivers causing these rains.

From the analysis we are doing, we can give a conclusive answer to whether we can expect more of this rain in the coming years and whether we need to put more measures in place, but for now I cannot pinpoint whether this will be a continuing trend or not.

Sputnik: What advice would you give people in danger of being caught up in the floods?

Joyce Kimutai: We'd like to warn the public to avoid driving, wading or walking through fast moving waters. Some of the deaths that have occurred could have been avoided. If we give an advisory, and people adhere to this, they can avoid the dams that are likely to swell, or the river banks that have been swelling in the past few days.

Deaths and damages could have been avoided. People must avoid going to the farm lands, it is likely that there will be some lasting water. The best thing for people to do is to look at our advisory; we are releasing them at frequent intervals, analyzing our systems and giving advisory that could impact weather related damage. If you are in the area then please heed these notices, and avoid the aforementioned places.

The views and opinions of Joyce Kimutai are those of the speaker and do not necessarily reflect those of Sputnik.