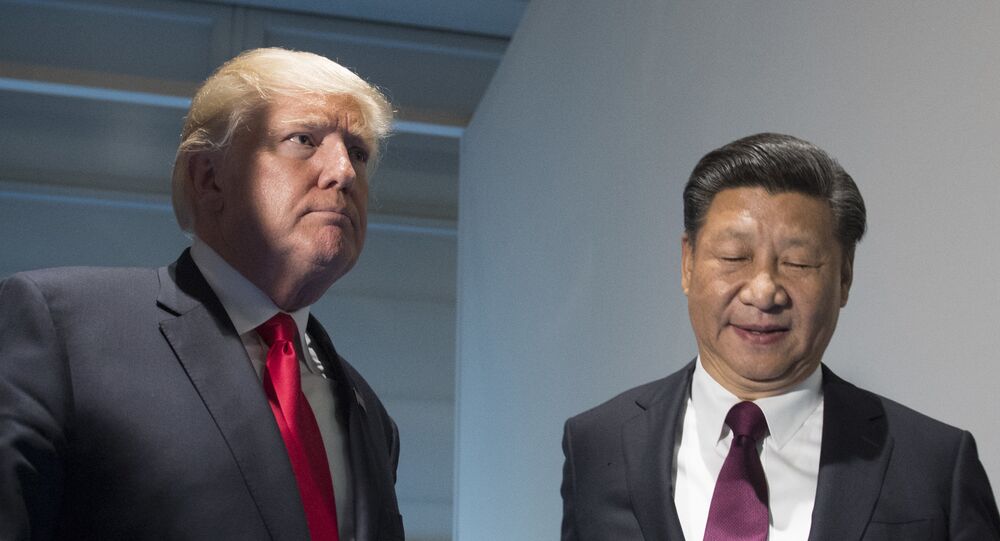 At the same time, exports of electrical equipment and electronic products rose by 11.3 percent, while exports of mechanical devices increased by 11.6 percent, according to the government institution.

Commenting on the matter, Tom McGregor, a political analyst and Asia-Pacific commentator for China's national TV broadcaster CNTV, noted that "this demonstrates that the so-called trade wars have not yet been implemented into an action plan, which is very important to note."

"The public should understand that making threats on higher tariffs and putting those tariffs into place are different actions. We should look at threats as 'bluffs' and the action of raising tariff levels as 'calling the bluffs'," he elaborated.

© Sputnik / Evgeny Biyatov
Why Soros, Goldman Sachs, Wall Street Tycoons Embrace Bitcoin
However, one is walking on thin ice while bluffing and exchanging threats, he warned, stressing that otherwise the sides could drive themselves into a corner.

However, as a result, the US has ended up by threatening to impose tariffs on $150 billion worth of China's imports, while Beijing has included soybeans on its list of $50 billion of US products, which would be subjected to 25 percent taxation should Trump proceed with his tariff spree.

Meanwhile, according to Bloomberg, Washington has extended a public hearing on the Trump administration's plan to impose tariffs on $50 billion Chinese goods "to accommodate everyone who wants to testify, as both governments continue talks on avoiding a trade war."

The media outlet added that China Vice Premier Liu He is expected to travel to Washington for trade discussions next week.

"Beijing should have played it smart and sought for immediate compromise on trade negotiations, since Trump will soon impose much tougher measures against them and this time it won't be a 'soft bluff,' the measures will be fully-enforced," the analyst suggested.

However, he reiterated his previous prediction that the US-China trade war is likely to be a protracted one.

© AP Photo / Andy Wong
Workers install wires on a 'Golden Bridge of Silk Road' structure on a platform outside the National Convention Center, the venue which will hold the Belt and Road Forum for International Cooperation, in Beijing

When asked whether Trump's restriction and tariff wars unleashed on China since March 2018 could affect the Beijing-led One Belt One Road (OBOR) initiative, also known as the New Silk Road project, McGregor responded that the ongoing Sino-Chinese trade wars "have nothing to do with the Belt and Road Initiative."

© AP Photo / Alex Brandon
'Inevitable': Analyst Predicts Protracted US-China Trade War Amid Trump's 'Gambling'
"Trump wants to protect the US manufacturing sector, but will not act to derail China's Belt and Road projects, so long as other nations will continue to support trade and investment deals with Washington," the analyst opined. "Here's where you can see win-win for the US manufacturing sector and the Belt and Road, in which they both succeed for the benefit of participating member states."

On May 7, the media outlet noted that "as China boosts overseas investment through its Belt and Road infrastructure program, it is increasingly dictating not just the terms of financing but also a broader set of technological applications."

It further presumed that "in doing so, [Beijing] is altering the global competitive landscape by defining and exporting technical standards for everything from artificial intelligence to hydropower," thus seeking to reduce the US and EU competitive advantage in China's neighborhood.

"It sounds as if Beijing wishes to act as the global governance mechanism for the entire international economy. That is not the case. China as a sovereign nation must take care of the interests of its people before concerning itself with global issues," McGregor stressed.

He pointed out that "the Belt and Road will be doomed if they close its doors to US and EU trade and investments."

"So in that regard, I would advise US and EU companies to ignore the myths that the Belt and Road will shut them out of the markets in Southeast Asia," the Beijing-based commentator underscored. "Just look at China's relations with ASEAN (Association of Southeast Asian Nations), they've been tumultuous at best. Beijing can't rely on Southeast Asian nations to stay loyal to China. Malaysia held recent elections and kicked out the pro-China government. Other countries in the region may soon follow."

What's Behind Washington's Fuss Over "Made in China 2025"

The American elite are out of touch and only support rules that benefit themselves, McGregor said, referring to the fuss around Beijing's "Made in China 2025" program.

"[The US establishment] doesn't care about fairness or a level playing field. This would explain their paranoia about the 'Made in China 2025' program," the analyst told Sputnik.

© CC BY 2.0 / Kārlis Dambrāns / ZTE
Casualty of Trade War: China Telecoms Giant Halts Operations as US Ban Kicks In
On March 28, 2018, the American influential think tank Council on Foreign Relations (CFR) released an op-ed entitled "Why Does Everyone Hate Made in China 2025?" It claimed that "rather than abiding by the free market and rules-based trade, China is intent on subsuming the entire global hi-tech supply chain through subsidizing domestic industry and mercantilist industrial policies."

According to the CFR, "Made in China 2025" is nothing short of "a blueprint for Beijing's plan to transform the country into a hi-tech powerhouse that dominates advanced industries."

In April, the US Treasury Department announced that it was mulling over invoking the International Emergency Economic Powers Act (IEEPA) to ban Chinese firms from buying US hi-tech companies as part of the Trump administration's effort to prevent the Middle Kingdom from obtaining American advanced technologies. In the same month, China's ZTE telecom corporation was barred from purchasing American chips.

Having criticized Washington's policymakers from cracking down on Beijing's Made in China 2025 program, McGregor admitted that when it comes to American hi-tech technologies, the Trump administration's concerns are understandable.

"The concerns are mainly about military technology secrets," he opined. "The US and China have not signed a treaty for a military alliance. Hence to allow for such military technology transfers can pose as an imminent threat to national security on both sides… The Chinese government and PLA (People's Liberation Army) would never sell their hi-tech secrets to the US, EU, Japan and many other sovereign governments as well."