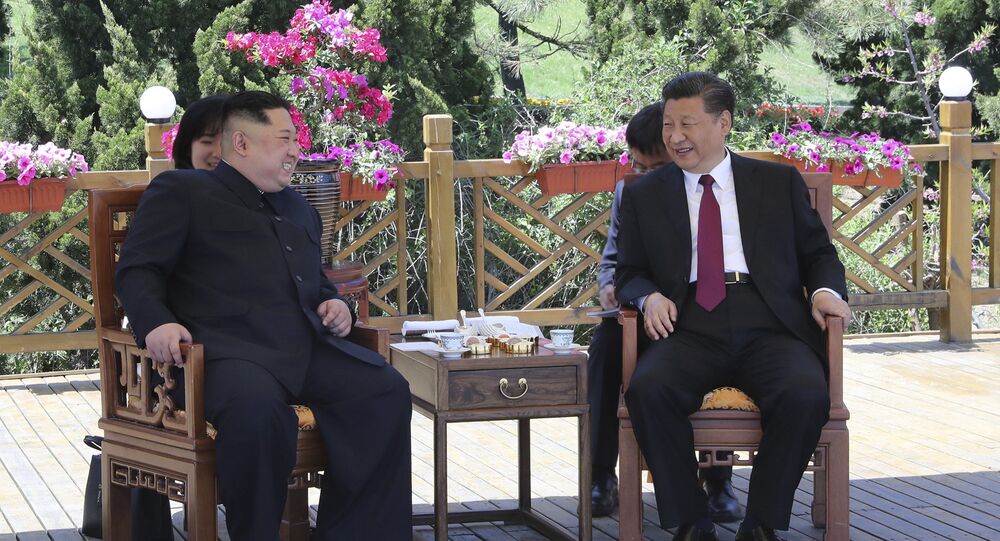 North Korean leader Kim Jong Un and Chinese President Xi Jinping held a surprise meeting in the northern Chinese city of Dalian on Tuesday in advance of the North Korea-US summit, according to reports.

Jude Woodward, author of the new book "The US vs China: Asia's New Cold War?" and Chris Black, an international criminal lawyer, told Radio Sputnik's Loud & Clear that the close collaboration and dynamic diplomacy between China and North Korea reveals the US' weakening role in the Korean Peninsula.

​"The strain in the relationship between China and the DPRK [Democratic People's Republic of Korea, North Korea's official name] existed but was always rather exaggerated in the West. However, I would say there is very close collaboration now between the two countries," Woodward told hosts John Kiriakou and Brian Becker.

"Trump has said that there will be no incremental steps by the US before total denuclearization by North Korea. That's not reasonable, in the same way that the trade terms Trump has put down in front of China are not reasonable. If you want a settlement, you have to be prepared to make some kind of deal, not just present ultimatums. Clearly, there is a big shift in the center of gravity of how politics in East Asia will sort itself out, because there is a shift in the predominant role of the US," Woodward said.

"The meeting between the DPRK and China shows that there is close coordination between the two. I thought the body language of Kim Jong Un and Xi Jinping was very relaxed. They were two people discussing things in a very relaxed way. I think it's almost inconceivable that the US would succeed in some tactic in splitting the DPRK from China. The real situation that we face in the Korean Peninsula is that the US influence in the region is weakening," Woodward explained.

This week, Chinese state broadcaster CCTV released images showing Xi and Kim walking in Dalian, a Chinese city less than a hundred miles from the China-DPRK border, and holding talks, suggesting that the Cold War-era allies may be mending ties frayed by Beijing's support for recent UN sanctions over Pyongyang's nuclear activities.

"After the first meeting between me and Comrade Chairman [Kim Jong Un], both China-DPRK relations and the Korean Peninsula situation have made positive progress. I feel happy about it," Xi said, Xinhua reported.

"It seems to me that China has been a big influence on DPRK and is supporting them to bring about these talks along with the South Korean leadership to try to go around the US. If the [Asian powers] can establish a peace treaty, there is no reason for US forces to stay in the Korean Peninsula. So, the American position is weakening as regional powers try and resolve this outside the box," Black told Radio Sputnik.

Last week, Trump announced that the time and place for his meeting with the North Korean leader had been decided and would soon be made public.

Will North Korea and the US Find Trust?; Time to Turn Off Bill Cosby?