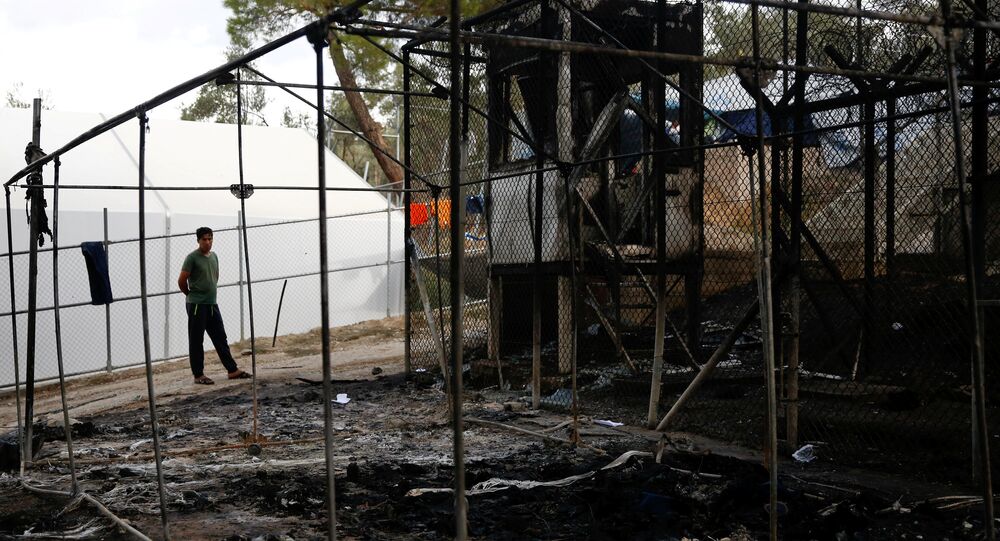 Protests against the Greek government and EU’s migration policy took place on the Greek island of Lesbos last week. People were angry with the 2016 EU-Turkey deal that has left thousands of asylum seekers stranded on the island. Sputnik discussed the situation in Lesbos with Eleni Takou, deputy director and head of advocacy of HumanRights360.

Sputnik: The locals in Lesbos have been very critical of the Greek government policies towards migrants and refugees. Is this criticism justified, in your view?

Eleni Takou: It is criticized, although one has to stress out from beforehand that any kind of xenophobic incident as the ones we have seen recently cannot not be justified, because I'm sure you're aware of the fact that some weeks ago we had a huge incident of racist violence on the island and as a human rights organization we understand there is a problematic situation there; we have been working on the ground, but at the same time one has to be aware of justifying xenophobic incidents, so just to answer your question, yes, there is a justifiable protest from the people in Lesbos because the infamous EU-Turkey deal that has been engaged for two years now, presupposes that people are stranded on the island until their asylum claim is processed, which is a very lengthy process, which resulted in the fact that there's been thousands of people right now accumulating on the island in very dire conditions, and this also creates a very stressful climate on the island as well.

Sputnik: Just try to explain to us in a little more in detail, now the mayor of Lesbos said that the situation on the island is exceptionally difficult, we understand that but, obviously, you could probably give us some visual pictures grammatically, how does the migrant crisis affect the local population on these islands now?

© AP Photo / Petros Giannakouris
EU-Turkey Migrant Deal Led to Overcrowding of Refugee Centers in Greece - UNHCR
Eleni Takou: There are now, the estimates are about 12,000 people on the five Greek Islands, in Lesbos the estimate is about 6,000 people on the island, which is very close to the population, actually, the Greek population of the island. If one has to understand it visually, it's like doubling the amount of people that are actually being on the island. The situation is very bad because there was one reception center in Moria, it has about 2,500 places, and there's another reception place with a 1,000 more places, which means that about half of the population is overcrowded right now, it's over the capacity of the reception places, which means people are living in tents, in makeshift camps, it means that these tents or makeshift camps are being set up on private property of people near Moria, so we have trespassing. The conditions in the reception camps are very, very bad, so the food is not good, the condition of Isobox [containers] where people reside, most of the Isoboxes are being destroyed, so right now we have very, very bad living conditions in Moria and in other places which means that people are already, the refugees, are in a very stressed situation themselves, and, of course, one has to adapt to that, and these people are kind of fed up with waiting on the island.

Sputnik: Who in your view is responsible for the crisis? And how could it be resolved? Is it leveled squarely at the EU with regard to the agreement that they underwrote back in 2016?

Eleni Takou: The responsibility falls mostly on the EU; what the EU has done after the 2015 welcoming spirit that we have all witnessed in Europe is that all of a sudden Europe decided that we cannot take any more people, so they decided to close down the borders and put all the burden on […] member states one of which is Greece. So this is mostly up to Europe because one has to understand that people are actually fleeing from war and poverty, and if the European states do not provide any legal pathways to do that then people will travel illegally, and this will end up in the situation we see on the Greek Islands, and on the Turkey-Libyan coast as well. Of course there's also the responsibility of the Greek government that has not done anything to better the conditions of living for these people, and this has also been criticized, but at the same time we must not forget that this is an EU policy that's being implemented in the Greek borders, so yes, the primary responsibility does fall upon the EU.

Sputnik: Do you think that this particular agreement also gives Turkey leverage over Greece when it comes to disputes between the two countries?

Eleni Takou: Of course the EU tried to externalize migration management to third country states such as Turkey. What they did is they gave a lot of leverage to these countries, so all of a sudden Turkey became the regulator of the flow of immigration in the region, but, of course, Turkey is a country where there's not much political stability right now, but the main issue is that although all this exists, and I think it was a false decision to make Turkey the regulator of the situation, even Turkey has been burdened a lot by refugees; right now there are more than 2.5 million refugees living in Turkey, so it's understandable that also the Turkish people say you European guys have to take your fair share of the responsibility.