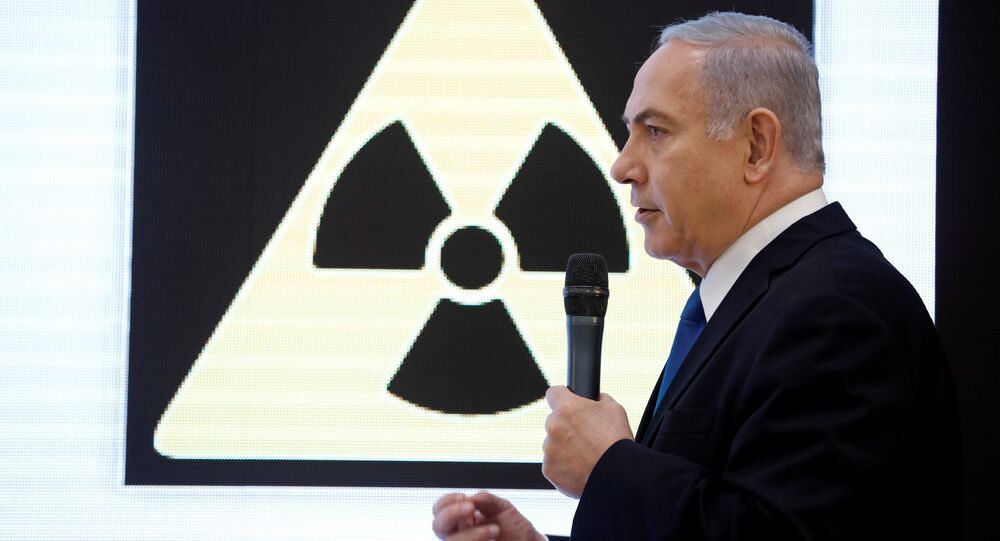 Israeli Prime Minister has fueled tensions over the Iran nuclear program as Benjamin Netanyahu presented what he describes as evidence of Iran’s operation to obtain weapons of mass destruction. Sputnik discussed how this move could affect the Iran deal with the head of the Berlin Information Center for Transatlantic Security, Ottfried Nassauer.

Israeli Prime Minister Benjamin Netanyahu has raised concerns over the fate of the Iran nuclear deal just days before the US deadline to waive sanctions on Iran under the agreement.

According to the chief of the Berlin Information Center for Transatlantic Security, Ottfried Nassauer, with his presentation Netanyahu clearly tried to sway Trump to put an end to the deal he’s repeatedly denounced.

"Mr. Netanyahu has obviously been trying to convince the US President Trump and his new State Secretary, Mike Pompeo, to do what they always wanted to do, to exit the nuclear deal with Iran," Nassauer told Sputnik.

He stressed that "the presentation of Mr. Netanyahu contained known facts. It was about documents that date back before 2003. But he did not present any evidence that Iran has been still working on nuclear weapons in any form since 2009."

The security analyst refers to Trump’s first reaction to the presentation as “irritating” stating that “the US reaction even went beyond the Israeli accusations.” According to Nassauer, this was later explained as a typo after the US Presidential Office wrote on Twitter: "Iran has a comprehensive secret nuclear weapons program,” but eventually changed "has" to "had". And Netanyahu did not go so far as to claim that Iran is currently working on nuclear weapons.

Nassauer also pointed out at the reserved reaction to the presentation of the US European allies, who are committed to saving the deal, which is different from the US stance.

“The interests of Mr Trump, Mr Bolton [National Security Adviser to President Donald Trump], and Mr Pompeo differ significantly from the interests of Europeans and much of the expert community, including in the United States. It is unanimously argued that this agreement is the best that could be achieved at the moment," Nassauer told Sputnik.

Speaking about Netanyahu’s move, the analyst also stressed that Israel fears Iran’s permanent influence in Syria and its expansion in the region, as the Jewish state, along with Saudi Arabia, remain Iran’s archenemy in the region. He also pointed out at Netanyahu’s personal political interests, drawing attention to the timing, which suggests that foreign policy reasons weren't the only motives behind his decision to unveil these facts.

"Israeli Prime Minister Netanyahu has long recognized Iran as his archenemy and also the best crutch in domestic politics. He knows that the Sunni Arab world is also relatively positive towards Iran. Perhaps his presentation was also a distraction from his many domestic difficulties, as well as the military strike on Syria at the night before his appearance, attributed to Israel," Nassauer stated.

Speaking on the fate of the deal, Nassauer voiced the opinion that it hadn't been decided yet, as Trump still might keep the agreement:

"I am not yet convinced that Mr. Trump will send this agreement to the rubbish heap of history. Trump's policy is not only erratic, but it’s deliberately built bringing others to concessions with wild threats, which eventually corner its counterparts to at least insecurity, or fear and terror. Trump could get positive reinforcement for his policy with the development on the Korean Peninsula, so he is looking for a similar approach with Iran."

The 2015 Joint Comprehensive Plan of Action (JCPOA), commonly known as Iran Nuclear Deal, which stipulated a gradual lifting of sanctions against Iran in exchange for Tehran curbing its nuclear program, was reached by the so-called P5+1 group — Russia, the United States, China, France, the United Kingdom, Germany — and the European Union on July 14.

The International Atomic Energy Association has verified that Iran is upholding its commitments under the accord. However, Trump has repeatedly criticized the deal, saying the European Union needs to fix major flaws in it.