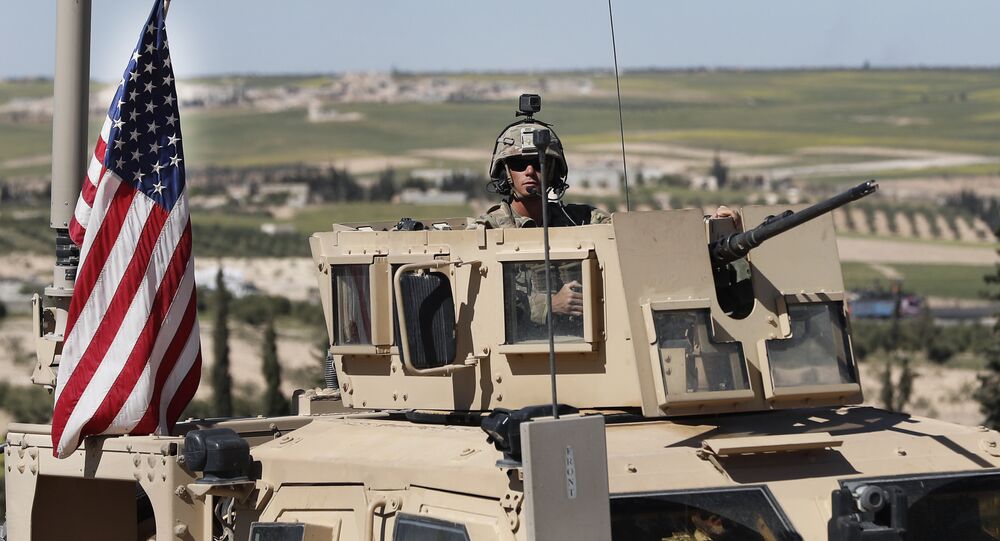 Washington is seeking to solidify its positions in northern Syria together with its close allies, the UK and France, Turkish political analyst Hamide Yigit told Sputnik. According to Yigit, the US’ current tactics are aimed at uniting various jihadist groups and using them as their proxies on the ground.

An escalation of tensions in Syria may soon turn into an open armed conflict, Hamide Yigit, a Turkish political analyst specializing in Middle Eastern affairs opined when speaking to Sputnik Turkey; she added that "the US, which acts on the Syrian territory as an invader, wants to maintain its presence there and expand its influence in northern Syria."

"As the positions of Western forces in Syria weaken, they try to use different strategies to stay in the region," she explained. "The recent joint move by the United States, France and Britain against Syria is an example of such a strategy, as well as their attempts to beef up their presence in Syria."

"The message of force" that Washington, London and Paris sent to Damascus on April 14, 2018 through their massive joint missile strike was, in fact, directed at Iran and Russia, the Turkish analyst opined.

To play a greater part in Syrian affairs one needs to gain strong positions on the battlefield on the ground, the analyst underscored. While the Syrian Arab Army has made considerable progress over the past few months, the US-led coalition is struggling to obtain some sort of a "trump card" to gain the upper hand, she said.

"[The US-led coalition's] moves against Iran could be regarded in this context, because Israel constantly calls Iran the main and most serious threat, Saudi Arabia and other Persian Gulf states echo [Tel Aviv's stance]," Yigit suggested.

© REUTERS / Amir Cohen
Netanyahu's Claim About Iran an Attempt to Distract From Syria Strikes - Scholar
She has drawn attention to the fact that the issue of Daesh (ISIS/ISIL)* has fallen by the wayside in Western rhetoric, while "the Iran factor" has emerged as a major "threat."

The political analyst highlighted that the US is seeking to expand its positions in Raqqa and Deir ez-Zor, "because when the Syrian army begins a large-scale military operation in this region, the US base in al-Tanf will be under threat."

"The United States is increasingly aware of this looming threat," she pointed out. "To date, the Syrian army has already taken control of a number of areas in Deir ez-Zor. This was immediately followed by a step from Israel: According to available data, the Iranian armed formations deployed at the military base in the north of Homs were attacked. Thus, we are talking about a direct aggression against Iran."

Yigit explained that every time US allies in Syria begin to lose grip, Washington steps up its anti-Damascus rhetoric and "incite the countries of region to start an armed conflict while Israel resorts to demonstration of force, using tactics of inflicting pinpoint strikes."

The Turkish analyst stressed that it is the population of the region who pay the high price for the West's strategy in Syria.

"Local sources say that a large-scale operation of the Syrian government forces is likely to begin soon," the analyst suggested. "In this situation, the US won't directly participate in the clashes, but will try to use remaining members of radical groups as its proxies, providing them with necessary support, as well as armed forces of the countries of the region that will suffer real losses in the event of fierce fighting."

U.S. Navy
US Navy Begins Sorties Against Daesh Targets in Syria - Navy
Yigit stressed that the US, France and the UK are "enthusiastically" sending their forces to Syria, trying to demonstrate that they will be the players that determine the balance of power, "but ultimately, it is the countries of the region that will pay for it."

"I tend to see the current actions of Western forces in the context of the tactics aimed at uniting disparate jihadist groups which mostly lost their positions [in Syria] and preparing them for the next conflict in the region," the political analyst concluded.

Meanwhile, the Kurdish-dominated Syrian Democratic Forces (SDF) reported that French military forces are beefing up their positions in Syria's Manbij. On May 4, Sputnik received a photo showing two armored vehicles with military personnel in the area of the Sajur River. Earlier, reports emerged that the US had set up two bases in the region.