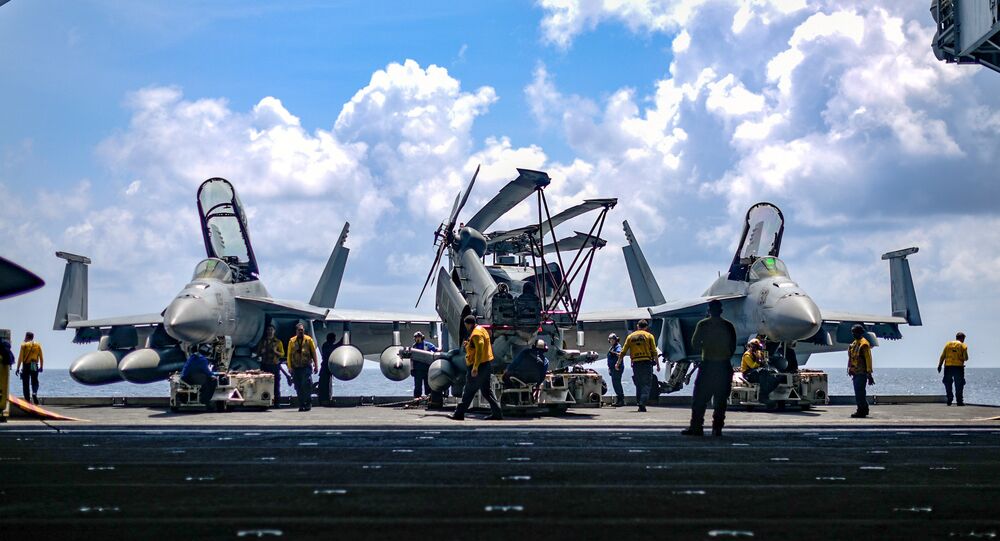 US Congressional authorities regarding trade and warfare have been usurped by American presidents, peace activist Jan R. Weinberg told Sputnik, commenting on Donald Trump's April 14 strike on Syria and the ongoing tariff war with Beijing. According to the activist, Washington's use of force approach prompts its opponents to act accordingly.

While the American delegation led by US Treasury Secretary Steven Mnuchin has embarked on a two-day trip to China to reduce tensions brewing over Washington's tariff war with Beijing, CNBC has broken a story about China's alleged deployment of anti-ship cruise missiles and surface-to-air missile systems on its military outposts on the Spratly group of islands in the South China Sea.

"The further militarization of outposts will only serve to raise tensions and create greater distrust among claimants," a Pentagon official told the media outlet commenting on the matter.

What Obama's Pivot to Asia Actually Resulted In

Speaking to Sputnik, Jan R. Weinberg, the peace activist and founder of "Show Up! America," noted that it was Washington that has long pushed ahead with the militarization of the Asia Pacific region, prompting China to answer in kind.

Obama's Pivot to Asia policies and practices, including the inextricably linked Trans Pacific Partnership (TPP) of which China was not invited to participate in as well as the arming of China's immediate neighbors and Washington's freedom of navigation operations (FONOP) have resulted in the escalation of tensions.

"If I may be so bold — the failure to demilitarize the shipping lanes, (the Malacca Strait for example) exacerbated in no small part by the militarization aspects of [Barack] Obama's Pivot to Asia with the torch carried by the Trump administration including the new commander of US Pacific Command (PACOM) Admiral Phil Davidson — will result in warfare between China and the United States and its allies within the region," the peace activist warned. "That is the broader issue that the media, think tank advisors and Congressional committees has failed to address. That is the broader issue that I believe that Trump will fail to grasp no matter how well he is briefed."

According to Weinberg, one should take a look at a broader problem in the US political system: Congress is ceding its constitutional authorities to the president who has accumulated nearly unlimited powers when it comes to trade and warfare.

"My perspective, when asked about Trump's threats and issuance of tariffs and Trump's orders to strike the sovereign state of Syria, for example, is that the United States Congress has abdicated its Constitutional authority to regulate trade and to deliberate and vote whether or not to declare war," the peace activist opined referring to both Washington's Syria strike and Trump's tariff spree that kicked off in March 2018, primarily targeting China for what the president called "unfair trade practices."

© AP Photo / U.S. Navy
Peace Activist: Power and Influence of Armament Industry in US Exceeds That of Presidency
Commenting on the April 14 US missile attack on Syria The Intercept's Jon Schwarz highlighted that the strike, authorized by Donald Trump, was based on the Office of Legal Counsel "opinion" which even the US Congress could not see. Although, "constitutionally speaking, Trump's orders were perfectly fine," the president's military powers sparks serious concerns, the journalist noted.

Weinberg highlighted that "the misguided, open-ended timeframe of the Authorization to Use Military Force (AUMF) legislation formulated in 2001 to conduct battle against terrorists across national boundaries clearly did not include launching missile systems against a sovereign government, however justified it may seem."

The President must get Congressional approval before attacking Syria-big mistake if he does not!

​"Such authorities regarding trade and warfare have been usurped by a succession of presidents, thus any foreign leaders and their advisors could easily view the United States as being untethered when it comes to foreign policies," the scholar emphasized. "They would have every right to be frightened and act accordingly.  To make matters worse it is known that the president has sole authority to order a nuclear first strike. That certainly makes it seem a part of the United States, its military, is ruled by a dictatorship. Congress must step up and change its ways. Re-reading the Constitution would be a good place to start.

US, China and Russia Need Open and Transparent Dialogue

© AP Photo / Jockel Finck
Peace Activist Explains Who Profits From US Nuclear Posture Review
The use of force does not seem to be a tactic that works, the peace activist believes, referring to the upcoming talks between Trump and Kim Jong-un, the leader of the Democratic People's Republic of Korea (DPRK).

He stressed that "the military, rights to navigation (both naval and merchant) and trade issues within the Indo-Asia-Pacific are way more complicated and inextricably linked — making the best outcome, if these two leaders are reasonable at all — to agree to continue negotiations and bring all of the nations within the Indo-Asia-Pacific to future negotiation roundtables."

"Whatever the precepts leading to the upcoming talks between Kim Jong-un and Donald Trump, whether it be that Kim reacted in fear to Trump's treats of 'Fire and Fury' or that Trump reacted in fear of a nuclear strike on our allies or our military installations within the region — we may never know," Weinberg noted.

At the same time, the scholar suggested that even if North Korea agrees to de-nuclearize, China will not accept a unified Korean Peninsula that hosts US military forces.

Meanwhile, the North-South summit last week between Kim Jong-un and Moon Jae-in has become the focus of worldwide attention.

"The dialogue, meetings and celebrations regarding the relations between North and South Korea is notable, should be encouraged and certainly not frowned upon," Weinberg stressed. "Anyone listening to the pronouncements that 'they heard it all before' and that 'North Korea is playing the United States like they did time and time again' have missed out that redemption, forgiveness and cooperation should actually come before there are bloody wars."

The peace activist asked rhetorically whether there is "a single United States Senator who will be willing to speak up and suggest that the US, China and Russia begin open and transparent dialogue on how each nation can transition toward peace-time economies."

The views and opinions expressed by Jan R. Weinberg and Ekaterina Blinova are those of the contributors and do not necessarily reflect those of Sputnik.