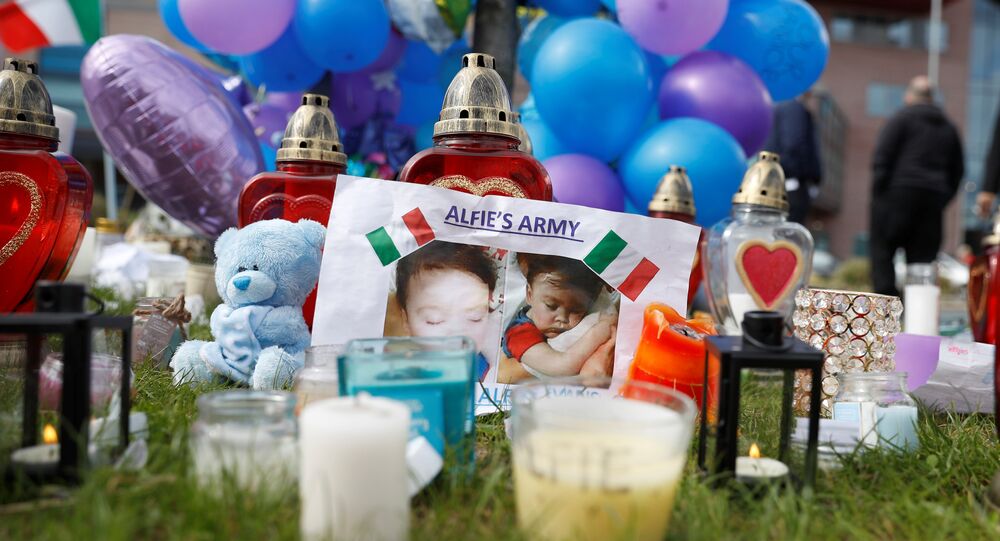 People Backing Alfie's Family Outside Hospital Seem to Have Own Agendas – Prof.

A two-year-old boy who had died nearly a week after his life support was withdrawn was at the center of a long legal debate over his treatment. A former UKIP member, Steve Woolfe, launched a campaign to change the law calling for more power for parents to decide on their children’s medical care.

Priscilla Alderson, emerita professor of childhood studies at University College London, has given her take on the campaign goals in an interview to Sputnik.

Sputnik: What is your take on Alfie’s law campaign and the lobby group behind it? What is your assessment of their intentions?

Priscilla Alderson: At the heart of the case always is the best interests and welfare of a child, and all the adults around the child trying to discern what is best for the little boy; and the argument of the court and of the doctors was that either Alfie was well enough to feel what was happening to him and would suffer from the long journey and more treatment, or he was so disabled that he would be unaware of what was going on.

And that would make the hope of his recovering in any way even more remote and unlikely.

Sputnik: Other hospitals have found themselves embroiled in the center of this social media scandal, suffering a barrage of abuse. I suppose this is what happens in this technological age that we are living in. And all the information is so open to the public, isn’t that? In what way have campaigns like this affected health workers in the health system in general? It can’t be easy, can it?

Priscilla Alderson: They already face a lot of stress and difficulty caring for these very ill children, supporting their parents, coping with the severe cuts that the NHS is having at the moment, the shortage of staff, agency staff.

Altogether in his short life Alfie would have had hundreds of people caring for him, and it’s very hard to coordinate the care and make sure that the family feels they are having personal care from people they know and trust. That’s one great difficulty. Another thing is that the people who have been supporting the family outside the hospital seem to have their own agendas.

Some of them seem to be pro-life people – "keep babies alive at any cost," "do anything to make their life longer however hopeless." Another is, who is actually paying for all these expenses, transport and care that was being proposed and why would they be doing it? A third group, from America, was saying that the NHS and the state-funded and provided health care is not best for families, as the private care as in the United States is better.

But of course, the private care in the US means that millions of people cannot afford any health care at all, particularly children. Another problem is that if they had had a fraction of the care that the NHS have given, the parents, if they were in the US, would be facing billions of dollars’ worth of debts, whereas the NHS care is all free to them.

Sputnik: Who should hold the rights ultimately to make the critical decisions as in Alfie Evans’ case? Who has the ultimate responsibility?

Priscilla Alderson: Ultimately, neither the parents, nor the doctors have the power. If they disagree, they go to the courts, and the lawyers listen to both sides and all the evidence they can gather, keeping in mind that they don’t want to respect either the parents’ rights, or the doctors’ rights, but the child’s rights, and what is very best for the child.

READ MORE: 'They Do Not Care About Their Citizens': UK Tories Crisis Explained

But the doctors don’t have to be forced to provide things they don’t agree with. The idea of the court is to have a neutral place that will listen fairly to both sides. However, the courts rely on expert witnesses, and these are always medical, so that almost always the courts do agree with what the doctors advise.