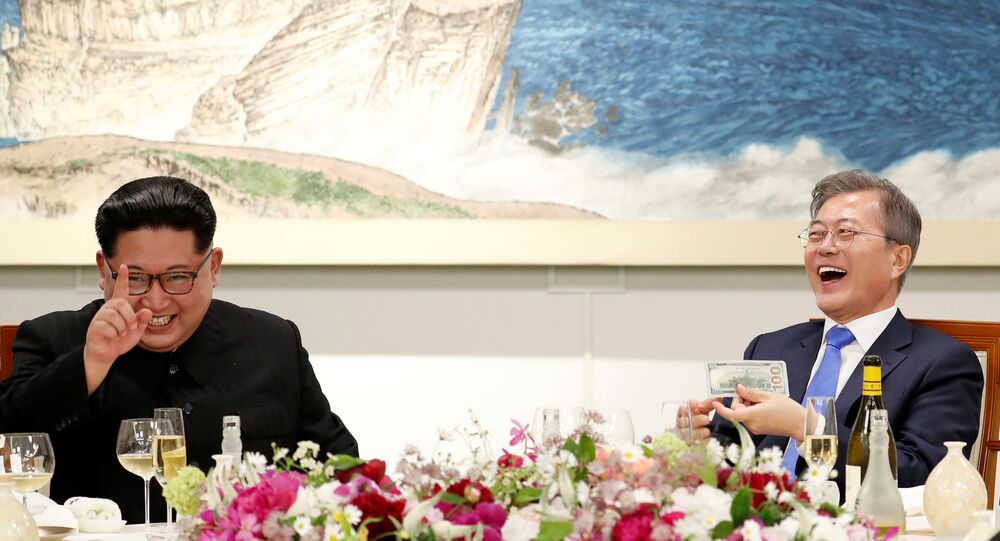 There have been calls for the US President to be awarded a Nobel Peace Prize if North Korea ends its nuclear program following Friday's historic North-South talks. Sputnik discussed Trump's role in the rapprochement with Robert Winstanley-Chesters, North Korea expert and Research Fellow at the ANU College of Asia and the Pacific.

Sputnik: How much credit should President Trump take for the recent breakthrough on the Korean Peninsula?

Robert Winstanley-Chesters: I think that when it comes to what has happened on the Korean Peninsula in a sense the long and boring story is that very little has yet happened on the Korean Peninsula in the way of constructing a future peace or resolving future issues. What has happened is the enormous change in the optics and the sort of mood. To an extent, the two Koreas themselves have been responsible for generating this mood and building an interesting pattern of optics.

© REUTERS / Kevin Lamarque
Japan, US See Inter-Korean Summit as Step Toward Peace in North-East Asia - Abe
North Korea has begun to talk, in a sense, in a totally different way about South Korea, to avoid intemperate language, to use different ways of speaking, and South Korea has attempted to make much more efforts towards a peaceful and harmonious relationship between [the states]. We saw that in the summit and the huge amount of effort that must have gone in to creating that on the ground summit. I think that Donald Trump, in a sense can take some credit for at least shifting the mood globally through his statement. This has not happened for a long time when the United States President actually suggested that he would meet the North Korean President. So that possibility of there actually being a meeting, I think, has made a huge impact for both Koreas, and South Korea has made effort in the autumn to reach out to North Korea.

North Korea made an effort in the New Year‘s address by Kim Jong-un to reach out to South Korea, and South Korea then has really run with the process. So Trump has impacted the mood globally. I think bigger credit, however, should perhaps be given to both Koreas, for their on the ground action so to speak.

Sputnik: But then there’s also China, it seems like a whole list of different players played quite a significant role. Some would credit of the new South Korean leader with what he’s done, also there was a trip to China prior to the meeting between the North and South Korean leaders which some also point to as being influential. What do you think is the most important, or the single most important player, or situation that accomplished this change in relations between the two Koreas?

Robert Winstanley-Chesters: As a North Korea watcher I think when we saw the beginning of this process unfold I thought that it would all come crashing down, the rapprochement around the Olympics would come crashing down when the South Korea-US joint military exercises in April, which happen every April, took place but North Korea, I noticed, went out of its way to suggest that it knew that South Korea and the Americans were going to do these military exercises and the fact of them was not really a problem and they could go ahead.

© REUTERS / Damir Sagolj
North Korea Media Break Silence on Kim-Moon Summit
So something like that for me was huge, because that's previously been a very big issue whenever there's been any rapprochement the fact that the military exercises between the United States and South Korea has always been a huge issue for North Korea, and they've always chosen to escalate the situation, but this time they chose not to, things like the winter Olympics, and the engagements and the connections between the two Koreas were a huge change in the sort of mood, so there are a number of things but I think North Korea’s acceptance of South Korea’s military exercises really smoothed the way, in my own opinion, for what might happen later.

Sputnik: There’s also this huge breakthrough, they’re talking about closing down the nuclear test site soon and there will be South Korean and American experts  standing by to watch this process, and also the fact that the US is now talking about withdrawing troops from the Korean Peninsula, how big of a deal is that really?

Robert Winstanley-Chesters: That is what North Korea means by denuclearization, so it also obviously means getting rid of its own nuclear weapons, but when North Korea talks about denuclearization it means also the American troops going home from South Korea and the withdrawal of the nuclear security umbrella from the Korean Peninsula from the United States.

Sputnik: I’m just wondering what do you think about Donald Trump, as there’s been talk about that Donald Trump should claim the Nobel Peace Prize, and that has been put forward by various people in the US government and by Donald Trump's supporters, do you think that his contributions to the peace process in North Korea are noteworthy enough to qualify him for this kind of recognition?

Robert Winstanley-Chesters: The Noble Peace Prize is a difficult prize at the moment anyway, in a sense that my intial thing would be to say it’s been quite debased by, interestingly, political decisions in the past. For example, if you can give the prize to Barack Obama, a president who achieved very little peace anywhere and had a massive campaign of extrajudicial killing using drones, if you can give him the peace prize then you perhaps can give Donald Trump the peace prize. But if you look at the Nobel Peace Prize history it has always been given to people who are quite difficult in a historical sense and politically quite difficult, it has always given them the Noble Peace Prize and it’s also often given the Noble Peace Prize in moments of peace creations where the peace hasn’t actually been that well established yet.