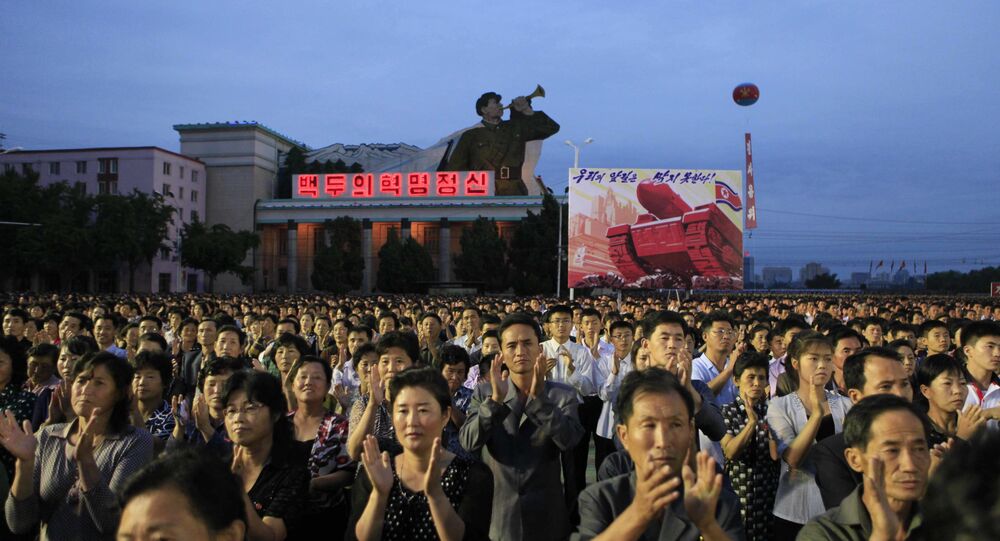 Kim Worked Assiduously to Develop Nukes, He's Unlikely to Give Them Up – Prof.

It was reported that demonstrators in Seoul took to the streets to push for reunification of the two Koreas with some of them holding placards saying that President Trump deserves the Nobel Prize. Radio Sputnik discussed what underlies the recent breakthrough on the Korean Peninsula with Lee Sung-yoon, a Korea expert at Tufts University.

Sputnik: How much credit should President Trump take for the recent breakthrough on the Korean Peninsula?

At the same time, to go from there, to argue that President Trump, his tough rhetoric and sanctions enforcement brought Kim Jong-un, the North Korean leader, back to the negotiating table, although negotiations have yet to begin, is rather premature, almost absurd, I would say; more absurd, more questionable than President Obama being awarded the Nobel Peace Prize, merely for having been elected president and presenting a much happier, multilateral peaceful vision of the world.

Sputnik: Donald Trump pledged to talk to Mr. Kim in the coming weeks, while the North Korean leader vowed to close the nuclear site soon. What are your expectations of the coming events? What are the chances that the parties arrive at a conclusive decision that will suit everyone?

Lee Sung-yoon: Well North Korea keeps saying "denuclearization of the Korean Peninsula" instead of "North Korea," and that has a specific meaning in North Korean parlance. That is dislodging the US nuclear [extended] deterrence from the region.

So, we are not talking about the denuclearization of North Korea per se, but disarmament or dislodging the US presence from the region. These are two very different conceptual definitions. Why did Kim Jong-un agree to shut down his main nuclear site? Because he probably doesn’t need to conduct another underground nuclear test. He has conducted six tests already in Punggye-ri in the northeastern part of his country.

There are reports of mountain fracturing, the site being no longer usable. I don’t know if the site is still usable. Probably, maybe, but he doesn’t need to show off, to show the US that he can conduct another underground test.

More likely, at some point, he will, as North Korea threatened last year, conduct a thermonuclear test in space, above the Pacific, above the Earth’s atmosphere, as the United States and the former Soviet Union used to, habitually, between 1958 and 1962, thus showing the world that he can fire a thermonuclear ICBM toward the US.

Sputnik: Do you think we will witness the complete denuclearization of the Korean Peninsula?

Lee Sung-yoo: Only if Kim Jung-un is presented with a serious financial, political, security threat, which is unlikely to happen. North Korea has assiduously worked toward developing nuclear capabilities for half a century.

It’s very unlikely that when North Korea now stands on the verge of complete nuclear breakout, that it will give it up. More likely, North Korea will try to buy time and money to advance, perfect, and complete its own nuclear posture review.

The views of the speaker do not necessarily reflect Sputnik's position.

North and South Korea Historic Meeting: The Politics Behind the Summit