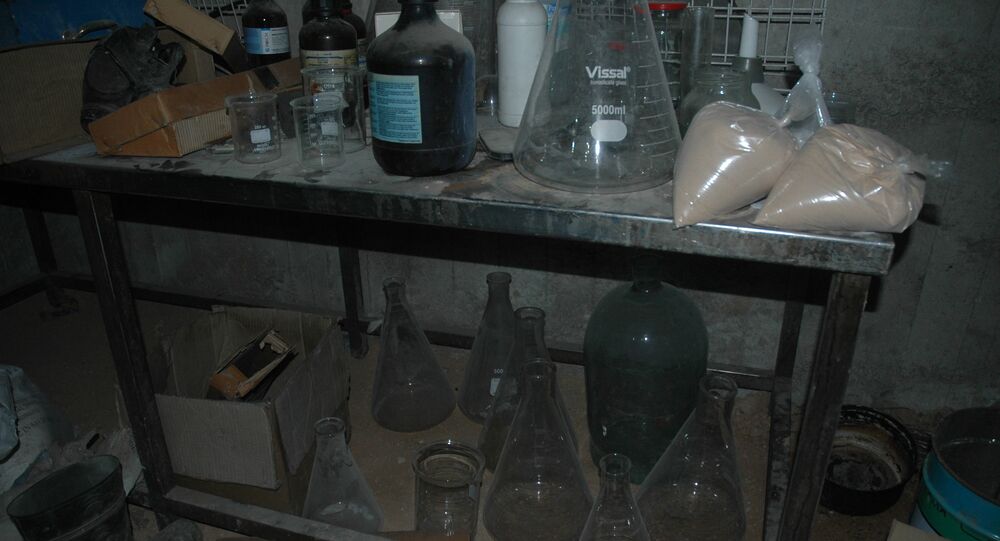 Syrian troops continue to find terrorist deposits with chemical weapons from Germany and the UK in Douma, according to the Syrian deputy envoy to the OPCW. He has called on OPCW to visit the site and expressed hope that they would dispel all allegations. Sputnik discussed it with Dr. Christopher Busby, of the European Committee on Radiation Risk.

Dr. Christopher Busby is a physical chemist and the scientific secretary of the European Committee on Radiation Risk.

Sputnik: Does it come as a surprise that Europe-manufactured chemical weapons were found at the place where the so called attack took place?

Sputnik: At the recent gathering in The Hague Russia brought witnesses from the town of Douma, I think very famous is the young man who everybody saw in the attack. And of course Western powers called that a Russian stunt. What do you make of the adequacy of that reaction?

© Photo : Alexandr Polegenko
'We Are Citizens With Our Own Strong Position': Prankster On Call to OPCW Head Amid Skripal Case
Dr. Christopher Busby: I always disbelieve everybody to start off with, that's where I come from in all of these affairs. I've dealt with this sort of issue with depleted uranium weapons usage and so on. But I do happen to have a line into this because I have a friend called Robert Fisk who I utterly trust. He's quite a famous reporter and I worked with him in the Balkans long ago with depleted uranium and also in the Middle East with depleted uranium. And he actually visited Douma and he talked to a lot of the doctors and nurses and individuals there and interviewed them. And they told him that there was no chemical attack, that there had not been a chemical attack that some "White Helmets" had rushed in. There was a lot of dust and lack of oxygen because of bombing and they just rushed in and shouted, "Chemicals!" and everybody of course had panicked. And so they then started spraying water over people and videoing the whole thing. So I believe Robert Fisk, I believe him utterly and I think it was a stunt and the stunt was carried out by these "White Helmet" people. And then the question of course arises as to who asked them to do that, whether they did it off their own bat or whether it was some operation that was controlled from a higher level, either by the Americans presumably or by the United Kingdom.

Sputnik: I was just wondering, in Douma there've also been accusations that that Russia and Syria may have tempered with evidence. How realistic is that to temper with evidence? Is it possible to clean up a site where these chemicals had been used in such a way that the OPCW wouldn't be able to find them once they entered that area?

Dr. Christopher Busby: No, there's no way that could be done. Absolutely no way that could be done. If the chemical weapons were there and if we can trust the OPCW and their laboratories then they would find them. There's no question….The only way you could tamper it was to alter the samples between the time that they were taken and the time that they appeared in the laboratories of the OPCW. And then to do that, if you were going to get rid of the evidence, you'd have to replace the samples with pure samples. You'd actually have to steal the entire sample and put back a sample that was pure. But a more easy way of doing it if you want to do the opposite would be to add some nerve agent or some chemical weapon material to the sample before it got to the laboratory and I believe actually there has been an accusation of that in the case of the Skripals.

Sputnik: Do you think that there's a connection between the Skripal matter and Douma?

© Sputnik / Vladimir Pesnya
No Victims of Alleged Chemical Attack Found in Syrian Douma - Moscow
Dr. Christopher Busby: Yes, I do. And it's not just between those two things. It also brings in the general move against the Russians, which I've observed since I've been living in Latvia by NATO forces concentrating in Latvia and by all sorts of media in Latvia saying that the Russians are going to come over the border and they are going to generally take back the whole territories of the Baltic states and so forth.

Sputnik: So, would you tend to think that the Skripal matter was sort of an attempt to discredit Russia prior to the events in Douma?

Dr. Christopher Busby: Yes, I do. I think it's all one operation. Otherwise there're too many coincidences here. It's all about chemical weapons and it starts in Britain and then it moves to Syria. It's very crudely done, rather stupidly done and it's brought in a kind of joint operation by the, I don't know who you'd call them, by those militaristic hawks and their secret service operators that have existed ever since the Second World Warw right through the Cold War and right through to the present day in the Pentagon and in the British Secret Service. They're really trying to stir up something against Russia. They're trying to bring Russia down. So you have to think about why that would be and at the same time you have to bring in the fact that Brexit has suddenly occurred out of the blue. And I think that's all part of the same thing. There's some large plan going on behind the scenes here that has to do with the petrodollar, it has to do with global spheres of influence. And of course as far as that's concerned, one of the most powerful countries in the world is Russia. It has enormous natural resources — it's got gas, it's got oil, it's got uranium, it's got everything. So really Russia can just sit back and laugh, whereas the Americans have got some gigantic national debt. And that national debt is only underpinned by the petrodollar and if the petrodollar goes down and these Middle Eastern countries start selling their oil in non-US currency then of course the US economy will completely melt down and I think what all this is about.