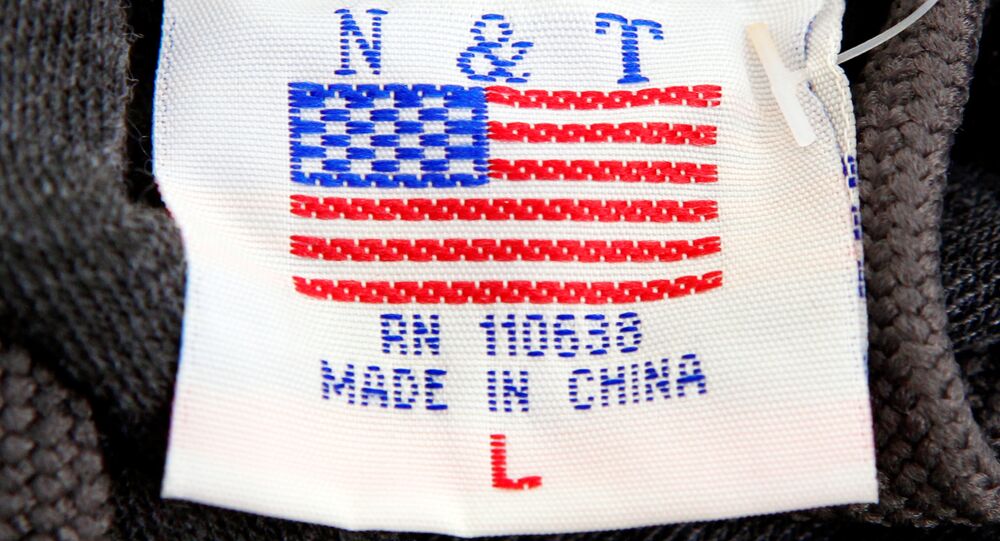 During an upcoming visit of the US trade delegation to China the Americans are unlikely to speak from a position of strength, analysts suggested in an interview with Sputnik. They also highlighted that the two countries have become deeply interdependent over the recent years.

After assuming the presidency Donald Trump is trying to impede China's progress in the scientific and technical sphere, Li Kai, a researcher at Shanxi University of Finance and Economics (SXUFE), opined, adding that the US views the Chinese development as a challenge to its own high-tech sphere.

"The US is taking steps to contain Beijing's 'Made in China —2025' strategy," Li told Sputnik China. "However, today, in the era of globalization, which also affects the United States, they can maintain control over themselves, but not the entire world. Therefore, the US will not be able to create obstacles for China to make progress in the technological sphere. They could just slow down this process, while at the same time paying a huge price, since Chinese and American enterprises are interconnected by unified production and technological chains."

© REUTERS / John MacDougall
Friendly Fire: How Trump's Crackdown on Russia, Iran Backfires on Europe
The Chinese scholar explained that China could now replace most of the imported technologies with domestic developments. "Therefore, everything that the US is doing looks like agony," he said. "In the long run, these efforts, I believe, will fail."

On April 24 during a joint press conference with his French counterpart Emmanuel Macron, President Trump announced that Treasury Secretary Steven Mnuchin and Trade Representative Robert Lighthizer will embark on an official trip to Beijing. It was reported that the delegation will be joined by prominent China hawk and author of "Death by China" Peter Navarro.

While the US president didn't specify the exact time of the trip, The New York Times noted that it would occur next week adding that the upcoming visit is aimed at "forestalling an all-out trade war."

Of late, the Trump administration has targeted Chinese investments in US high-tech companies and threatened to impose additional tariffs on $150 billion worth of Chinese products.

© AP Photo / Andy Wong
China Has Plan of Action Amid US Trade 'Unilateralism', Ready to Take Measures
Speaking to Sputnik, Mikhail Belyaev, chief economist at the Institute of Stock Market and Management (ISMM), opined that in the context of classical diplomatic etiquette Beijing has an upper hand in the upcoming negotiations as the talks will be held on China's territory. According to the economist, judging by this, it is unlikely that the US delegation will come to dictate conditions to Beijing.

"This is another call, a small step that indicates that China is gradually gaining ground in international diplomacy and foreign economy," he said.

However, the Russian scholar warned observers against overestimating the visit of the US delegation to Beijing: "This does not mean that China has already achieved what it seeks to achieve, but this is another indication that China is moving in this direction.

"On the part of America it is an indicator that, despite it voicing hegemonic statements, it has to reckon with the world's realities and muffle its claims and desires," Belyaev emphasized.

For his part, Li noted that the Chinese leadership hopes that the US will eventually solve the bilateral trade disputes within the framework of the World Trade Organization (WTO).

"Obviously, the Americans have finally realized that the parties should sit down and negotiate, as the trade war with China will have a boomerang effect and hit US interests," he suggested. "China's position is to respond by force to force, and never show weakness."

© Sputnik / Bolat Shaikhinov
Scholar Sees ‘Obvious Tendency’ of US Trying to ‘Contain, Oust’ Russia and China
On the day when it was made known that the US and China would soon launch negotiations to minimize the consequences of the trade war, The Wall Street Journal, reported, citing sources familiar with the matter, that the US Department of Justice is carrying out an investigation into the potential violation of US sanctions against Iran by the Chinese company Huawei.

The US move may create additional difficulties for Huawei which has already suffered due to Washington's efforts to crack down on Chinese telecommunications equipment manufacturers in the US.

Earlier in April, US authorities introduced a seven-year ban on purchases of crucial American components for China's ZTE Corporation, a producer of telecommunications equipment and systems, citing national security issues. On April 25, ZTE held a conference with its major suppliers, suggesting that the ban is likely to be related to the US trade war with China, rather than US national security.

Meanwhile, following Trump's announcement, on April 26, Chinese Commerce Ministry spokesman Gao Feng warned the US against trade unilateralism and called upon Washington to adopt a rational approach. He also stressed that China does not accept unilateralism and protectionism in any form.

Russia, China and Iran Need To Be Included in Any Talks on Nuclear Deal – Expert

China Will Not Permit Taiwan to Be Seen as Separate Country

Iran Suggests Countering 'Hostile' US Measures Together With Russia, China