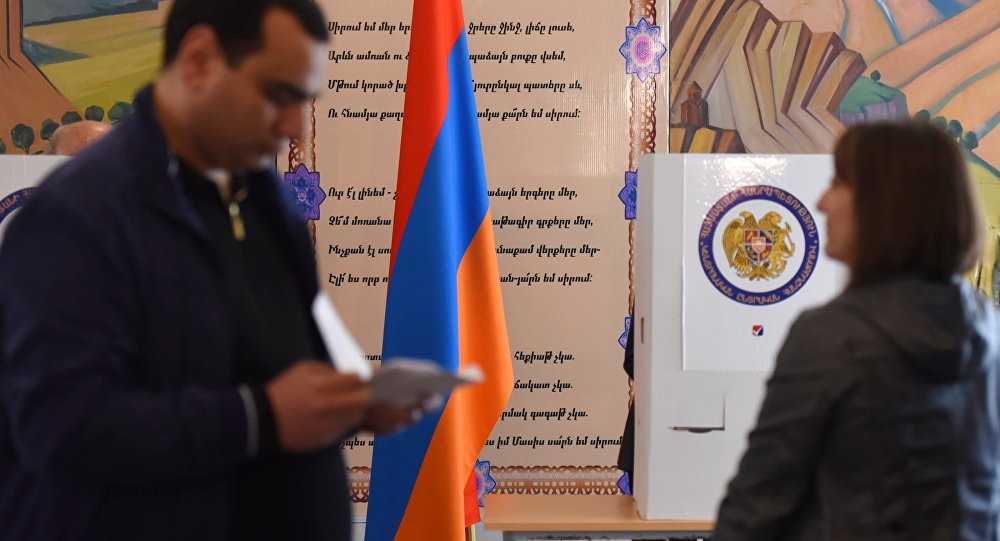 For the past two weeks, Armenia has been grappling with political crisis. Mass demonstrations in the region have prompted the resignation of their prime minister, and now the parliament is set to elect a new leader. Alexander Markarov is the Director of the Armenian branch of the CIS institute. He describes the protests on the ground in Yerevan.

Sputnik: What is the current situation in Armenia?

Alexander Markarov: The current situation is relatively calm, with the exception of the demonstrations which are taking place mostly in the evenings, when the leader of the movement Nikol Pashinyan is presenting his statements regarding the future of Armenia. That's the situation on the ground. But at the same time there are parliamentary processes, which are taking place during the negotiations between different the actors which exist in Armenia, because everybody in this situation of uncertainty would like to reap possible benefits from the situation.

Sputnik: Is it likely that a member from the Armenian Republican Party will be elected as prime minister?

© AP Photo / Dmitri Lovetsky
Armenia’s Ruling Party to Mull Replacing Leader, Open For Talks With Opposition
Alexander Markarov: Now that is the million dollar question. It is obvious that the Republican Party would not like to surrender, whilst the leader of the opposition is basically stating that he is looking forward to the surrender of the Republican Party. They now have 58 votes in the parliament, which is more than enough to keep their representation and try to present their candidacy for the Prime Minister. But as it sometimes happens within such kind of situations, there are possibilities for either diffraction or non-consolidated walking within the Republican Party. Nowadays the issue for them is to see, is there a candidacy which could be supported by others, and will it be supported by the Republican Party? Nikol Pashinyan will be the candidate who will be, and is actually already supported by Yelk (his group in the parliament) and he will be presented as a candidate for the Prime Minister. So now, there are major negotiations taking place between the opposition movements with the Prosperous Armenia party, which rebranded itself into the Gagik Tsarukyan fraction in the parliament. They will have approximately 40 votes. But to elect a Prime Minister they will need 53. So the main bargain will be with the Dashnaktsutyun party, which quit the coalition yesterday — and they have approximately 7 votes in the parliament. The issue will be the remaining 6. So nowadays Nikol Pashinyan is looking forward to creating a coalition around him within the parliament, while the Republican Party is trying to check the possibility if they have potential to put forward some candidacy which will be supported completely within the party and by others.

So there are two major routes. One is with Pashinyan as the prime minister; he might be elected on May 1st, when the session of parliament is scheduled. Or the Republican Party has a few days to check what they can do as an alternative.

Sputnik: What is the vibe on the ground, are demonstrations peaceful?

Alexander Markarov: For most of the time it was calm, with the exception of the demonstration and periods when the streets were closed by students, demonstrators, or different kinds of pickets. There was some disturbance which was caused by the cars and signals. But from the point of security the city was secure, and is still secure. I believe there is a possibility for a security situation continuing as it was before. We can still see tourists who are walking around, different people who are still coming to Yerevan.