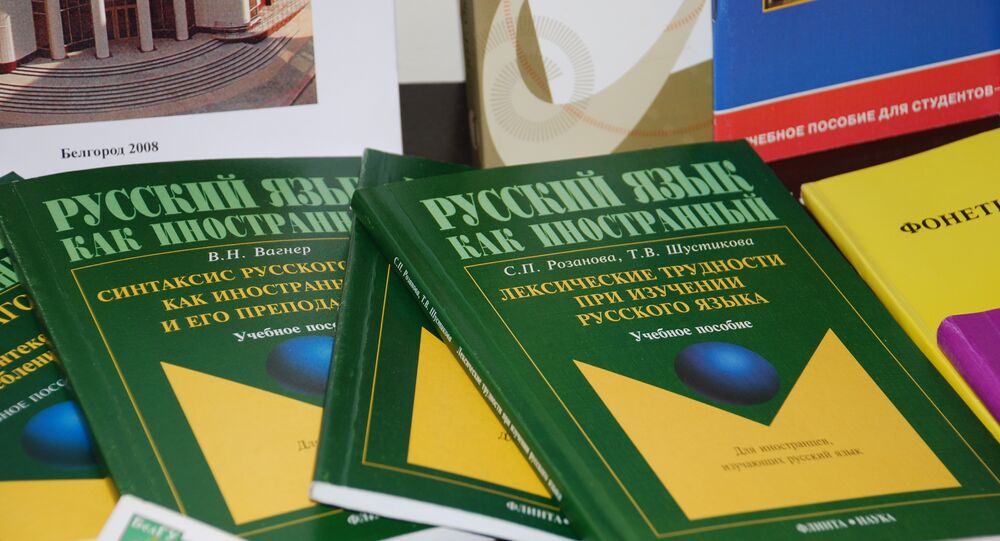 Iran intends to replace English as the second foreign language in the country's educational system with other languages, including Russian and has started negotiations with the Russian Ministry of Education and Science.

This was announced by Iran's Education Minister Seyyed Mohammad Bathaei at a meeting with Vyacheslav Nikonov, the chairman of the State Duma Committee for Education and Science during his three-day trip to Moscow.

Sputnik discussed how quickly the Russian language will take root in the Iranian education system, and what difficulties there may be along the way, with Iranian philologist and the head of the faculty of foreign languages ​​of the Azad University in Tehran, Dr. Mohsen Shojaie.

"If you look at it in terms of morphology, then English is much closer to the Persian language than Russian: both by pronunciation, by structure and by syntax. The first difficulty in mastering the Russian language, which students face, is the correct pronunciation of words and letters. In this regard, the Russian language for Iranians is much more complicated than English. Therefore, we can say that for most Iranians, Russian is considered one of the most difficult languages ​​to study."

Dr. Shojaie also noted that there is another important aspect here.

"I have repeatedly talked about this with my colleagues in Russia, including, at one of the last meetings in the I.A. Goncharov Cultural Foundation. We are with Russia, first of all, neighbors, and this is very important, as we say: ‘You don't choose your neighbors.' Therefore, we should make the best of our good-neighborly relations. Russia is one of the world powers and plays an important role, so we must use this opportunity of being neighbors with such a great power. At first, we must learn and know the language of our neighbors — and not only at the level of politics and diplomacy."

© REUTERS / John MacDougall
Friendly Fire: How Trump's Crackdown on Russia, Iran Backfires on Europe
However, to really promote Russian as a second language in Iran and Farsi in Russia it must not be limited to just spheres of politics and diplomacy. "Cooperation should develop in the scientific, technological and trade sectors. That means, it is necessary for Russian companies and organizations to start working in Iran. And in Russia, across different regions, Iranian companies should work on a parity basis. This will lead to an increase in the demand for specialists speaking both of these languages. If such work is not done, then it will be difficult to popularize the Russian and Persian languages ​​in our countries. This will mean that in the Iranian or Russian job markets the demand will exceed supply. The lack of demand for specialists will lead to frustration among people, which is then transferred to society. And ultimately, such negativity may lead to Iranians not be interested in learning Russian as a foreign language when they do not see the prospects for its use in future work," he told Sputnik.

"In Iran, a lot of work was done to teach Russian in universities. But today the supply for educating specialists with knowledge of the Russian language exceeds their market demand. It is necessary to equalize this gap, and not to think about the scale of the popularization of the language, but about improving the quality of its teaching and its being mastered by students."

On whether Iranian schoolchildren are ready to choose Russian as a foreign language Mohsen Shojaie believes:

"The method of studying a foreign language (English) in Iranian public schools is inefficient, it is very outdated. If you take an average high school graduate who studied English only following the school program without additional classes and tutoring, then he/she can hardly speak English. They do not understand movies or books in English very well. It would be bad if the same method is used to teach Russian language which is much more complicated than English. This is another problem concerning the popularization of the Russian language."

Dr. Shojaie also notes that it's important to take into account the Iranian mentality.

"Today, out of 1,000 Iranian families, only one will be ready to teach their children Russian instead of English. It is necessary to overcome the cultural gap between our people which still exists. Perhaps then Iranian families, after getting to know the Russian people, will be ready to send their children to Russian language classes instead of English. So far, there are not many Iranian schoolchildren that want that," Dr. Shojaie concluded.

US Seeks Supplemental Agreement, Not Renegotiation with Iran - State Department

US Suspects Iran of Smuggling Weapons to Syria - Reports