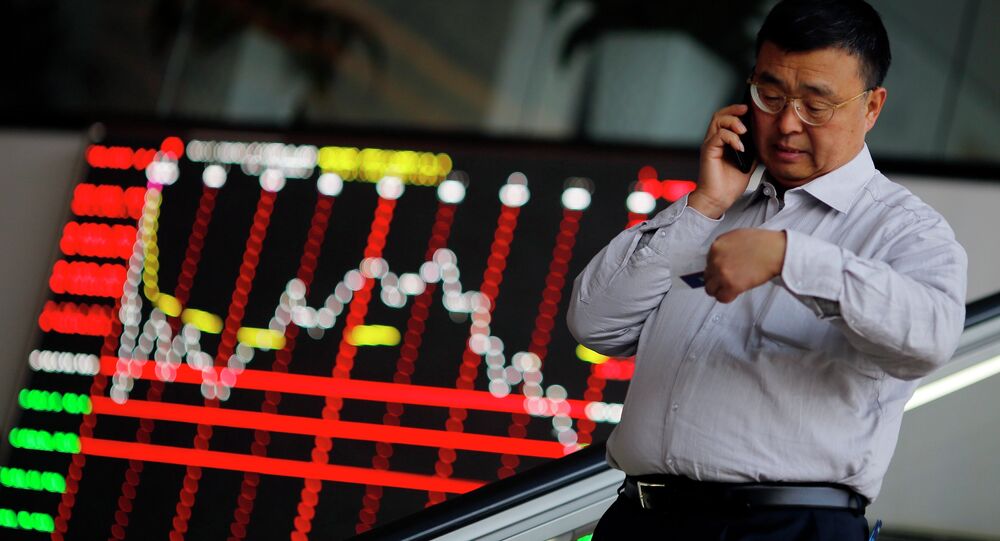 Will Beijing Manage to Survive the US-Chinese Trade War?

Beijing has kicked off a number of measures aimed at bolstering its economic growth, Chinese researcher Liu Dan told Sputnik. According to Liu, the country's internal difficulties have not been triggered by the US tariff war unleashed by the Trump administration on China.

One should not overestimate the impact of Sino-American trade frictions on China's economy, says Liu Dan, a researcher at the Chongyang Institute for Financial Studies (RDCY) of Renmin University of China.

"China's efforts to regulate the economy are aimed at eliminating structural imbalances and sore points inherent in the Chinese economy," Liu told Sputnik China. "China is now struggling with three internal problems: excessive credits, environmental pollution and a gap between the rich and the poor. The US-Chinese trade conflict is just an external factor; China would still carry out its reforms if it didn't emerge. The trade conflict has merely become a catalyst for these changes."

© AFP 2021 / Behrouz Mehri/Pool
How China is Forming a United Front to Counter Trump's Protectionism
According to official data, the People's Republic of China's economic growth in the first quarter amounted to 6.8 percent, signaling that the country's development is going on at a steady pace. However, in some provinces and cities growth rates have declined. For instance, Tianjin, previously one of the fastest growing regions, has shown only 1.9 percent. The country's growth of manufacturing output amounted to only 0.1 percent in the first quarter of 2018, which is 2.2 percent lower than a year ago. Meanwhile, the country's fixed asset investments have fallen by 25 percent over the past year.

Observers suggest that the old growth model based on exports and massive investments has exhausted itself. The return on each invested yuan is decreasing, triggering economic imbalances in the form of excessive infrastructure and production capacities and, as a result non-recurring debts. In light of this, the fight against the loan debt burden and shifting the focus from quantitative to qualitative growth appears to be the way out. At the same time, however, the slowdown should not be too sharp, as it could cause an upsurge in unemployment and drop in income.

The researcher underscored that Beijing realizes that the possession of high technologies is the major competitive advantage in the modern world. Therefore, China needs to move forward bolstering innovations.

"The transformations China is going through include the revision of quality, efficiency, driving forces, boosting the efficiency of production factors, accelerating the alteration of the development model," Lui emphasized. "These transformations are aimed at improving the economic structure, promoting production to a new level, stimulating the development of new technologies and products through innovation, protecting intellectual property, and developing new industries with the decisive role of the market in resource allocation."

© REUTERS / Thomas White/Illustration/File Photo
China's Yuan May Strengthen Its Position in the Next Few Years – Analyst
It is expected that revenues from domestic consumption will become the basis for innovation, the researcher elaborated. He drew attention to the fact that the generation of millennials — those who were born in the late 1990s — have come to the market: Unlike their parents, these people are ready to consume here and now instead of saving for a rainy day.

This explains the demand for p2p-lending, microfinance organizations and Alipay or Wechatpay credit products. The problem is that this market has started to grow too fast, Liu noted. In 2015, the total amount of outstanding consumer loans was estimated at 19 trillion yuan, while in September 2017 it amounted to 30.2 trillion yuan. Therefore, the authorities need to maintain the volume of household loans at a reasonable level, the researcher suggested.

"If the volume of household loans remains at a reasonable level, it will help increase the domestic demand," he opined. "But if the leverage is too large, people will spend the lion's share of their income on debt servicing, and this will strangle the consumption."

Citing Haitong Securities, the researcher explained that in November 2017 the household debt in China amounted to 54 percent of GDP. For comparison's sake: in the USA this figure was 79 percent, in Great Britain —  88 percent, in the Eurozone 59 percent, while in Japan it was 58 percent. That means China's figures are lower than in developed countries, he pointed out.

"Yes, indeed, in the past 10 years, this indicator has grown rapidly. But the authorities brought the situation under control, and in 2017 the indicator began to decline for the first time," Liu underscored.

© AFP 2021 / PRAKASH SINGH
China and India to Boost Partnership Amid Washington-Beijing Trade War
However, the scholar believes that the internal consumption will develop not only at the expense of credit means. Over the last five years an average of 13 million new jobs has been created annually, while 68 million people have managed to overcome the poverty line.

The jobless rate in cities and rural areas remains stable at 5 percent, which is much lower than in developed countries, he stressed. The consumer price index in the region amounts to 2 percent. As a result, in 2017, consumption accounted for almost two thirds of the economy, Liu asserts. So, no matter how the external situation develops, China will rely on its own capabilities, he concluded.

Meanwhile, the Trump administration continues to crack down on its economic and geopolitical competitor. After raising steel and aluminum import tariffs, Washington has threatened China to impose tariffs on $150 billion worth of Chinese products over the so-called "unfair trade practices." In addition, the White House is considering a series of measures to prevent the transfer of high technologies to China and curtail Chinese investments in the high-tech sphere in the US.

Trump's Trade War With China: Debate Rages Within the Administration