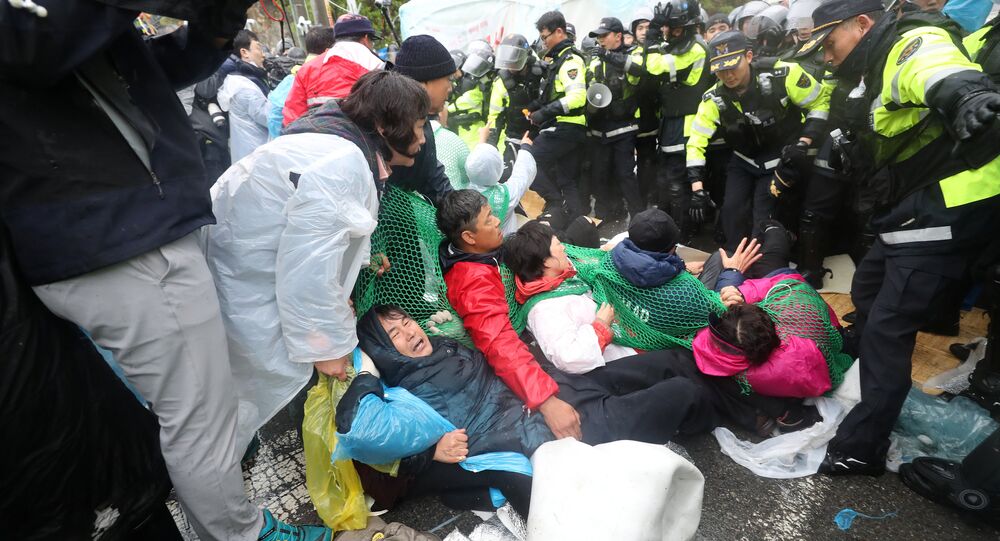 Anti-THAAD Protest in S Korea: What it's All About and Who Could Benefit From it

The Ministry of Defense of South Korea, days before the inter-Korean summit, has decided to move construction equipment and materials to a base housing the US anti-missile Terminal High Altitude Area Defense (THAAD) systems, sparking protests among area residents opposed to the deployment.

Thousands of riot police had to intervene and disperse the demonstrators.

According to the Defense Ministry, it was necessary to repair the roof at the base, which began to leak due to rain, as well as to install a water disposal system. However, this did not appeal to some local activists who are against the creation of another military base.

In its statement, the pacifist organization the "Peace Council Against the Deployment of THAAD", said that "in the next three months, during the construction period, the arrival of workers and the delivery of supplies will be blocked every day."

© REUTERS / USFK/Yonhap
Lockheed Martin Gets $1.3Bln to Manufacture More THAAD Interceptors
Earlier in the course of negotiations with the Defense Ministry, the organization had called for sharing all information about the transport of equipment and supplies, and construction progress with the residents of Seongju County, where the anti-missile systems are located. But the ministry found their demands to be unreasonable, igniting the subsequent clashes.

Nevertheless, not all THAAD opponents support the protesters. After all, attempts to block the delivery of construction supplies will hurt not only of American serviceman but also Korean military personnel.

As recently stated by one of the opponent's to the deployment of US anti-missile systems, Justice Party MP Kim Jong-dae, "we must approach the THAAD issue not from the standpoint of protests around the base, but from the point of view of a strategic atmosphere of peace, including the development of inter-Korean and North Korean-US relations."

The "Seongju Committee Fighting for the Cancellation of the THAAD Deployment" delivered a similar message on April 23. In their statement, they said that they did not support the Council's demands to resist all activities related to the American base, but called attention to the fact that they fear the military base could remain in Seongju permanently.

"It is very difficult for us to support the 'Peace Council's' chosen method of response, calling on residents of Seongju to abandon all their affairs and continue to gather for protests and sit-ins. We believe that it is necessary to be far-sighted and approach this issue from the standpoint of forming a strategic structure of peace on the Korean Peninsula, including the development of inter-Korean relations," the Chairman of the "Seongju Committee," Lee Jae-dong, told Sputnik.

© CC0
Pentagon: F-35 Can Achieve Missile Defense Capability if More Money Spent
"Conservative media have recently covered in detail the anti-THAAD protests by Seongju residents, trying to use this issue to concentrate conservative forces before the regional elections to be held on June 13. And, given the rapid changes in foreign policy and security, such as the development of a dialogue between the South and the North, as well as North Korea and the United States, they may be able to do this to some extent," Lee Jae-dong concluded.

The US Army's THAAD system that has been deployed in South Korea under the 2016 deal between the two countries is designed to shoot down short- to medium-range ballistic missiles in the terminal phase of their approach to a target.

China strongly opposes the THAAD deployment as it believes it could be used as an instrument against the country.