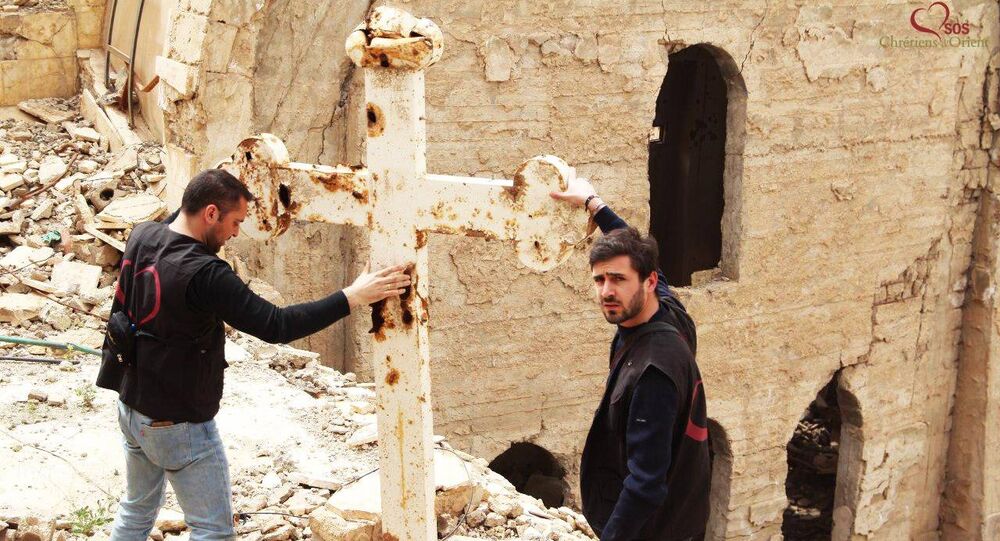 Several French humanitarian organizations were invited earlier this week to attend an event held at the Élysée Palace in Paris, though the choices made by the government while handling the invitations baffled members of the European Parliament and NGO representatives alike.

While the French government extended invitations to a number of humanitarian organizations operating in Syria, including the Syria Charity, for some reason the SOS Chrétiens d'Orient – one of the oldest and most influential charity groups providing aid to Christians in the Middle East – wasn’t invited.

MEP Patricia Lalonde, a member of the Alliance of Liberals and Democrats for Europe, told Sputnik France that she can’t fathom why SOS Chrétiens d'Orient wasn’t invited.

"The fact that Syria Charity was invited also became an unpleasant surprise for me. Everyone knows of the ties Syria Charity maintains with the Muslim Brotherhood; for example, Mohammad Alolaiwy, Syria Charity’s head, is close to the French Muslims (a group formerly known as the Union of Islamic Organisations of France). We need to be careful with these 50 million euros [that France intends to spend on humanitarian aid for Syria], and make sure that this money will be spent on humanitarian purposes instead of political projects," Lalonde said.

© REUTERS / Hosam Katan/File Photo
US Won't Help Assad's Syria Rebuild Nation - State Department
She noted that while the Muslim Brotherhood has done a lot of good in Egypt by helping the poor, it also uses its humanitarian activities to help promote their political agenda.

"In fact, the Syrian opposition had ties with the Muslim Brotherhood from the beginning. They try to oust Bashar Assad in order to install an Islamist government backed by the Muslim Brotherhood. That is very dangerous," Lalonde said, adding President Macron was possibly misinformed about the nature of some of the aforementioned NGOs.

"French authorities are well aware of the fact that we’ve been working in Syria for four years now. Truth be told, I approve of this initiative; I believe that most of the selected charities do a good job and help Syrians, though I cannot say it about all of them," he said.

Blanchard added that he was surprised that Syria Charity was invited, as this organization operates only in two Syrian provinces, which comprise about 10 percent of the country’s territory. He pointed out that the group provides aid “only to one particular category of Syrians, only to those who adhere to one particular political stance.”

"It’s clear that Syria Charity pursues a political agenda and closely cooperates with groups that control the Idlib province, which is a cause for concern. It’s good that France wants to help Syria, but these funds must not end up with groups catering to the interests of religious fundamentalism," Blanchard explained.

The views and opinions expressed by Patricia Lalonde and Benjamin Blanchard are those of the speakers and do not necessarily reflect those of Sputnik.