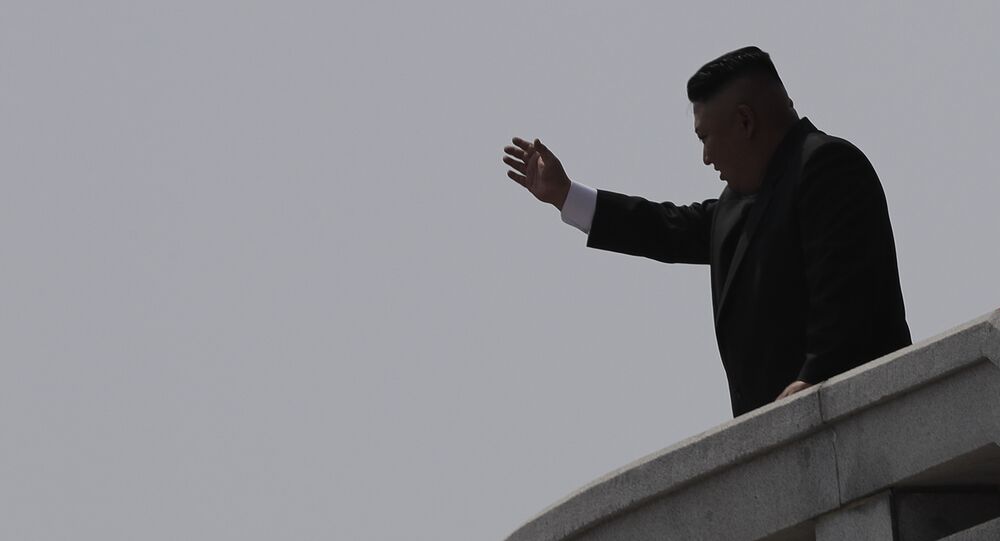 North Korea’s leader has promised to suspend ballistic missile and nuclear weapon tests – that's what he told a meeting of the ruling Worker's Party of Korea on Friday as quoted by state-run KCNA news agency. Sputnik discussed Mr. Kim's statements with Dr. Joseph Cheng, professor of political science at the City University of Hong Kong.

Sputnik: What is your assessment of Mr Kim's announcement ahead of his talks with the South Korean president and President Trump?  How big a step is this?

Dr. Joseph Cheng: These are significant indicators or gestures of goodwill. Certainly they represent very substantial efforts on the part of Kim Jong-un to engage in serious negotiations with South Korea and the United States, although one has to admit that these gestures, these promises can easily be withdrawn.

© AP Photo / Wong Maye-E
Kim's Decision to Pull the Plug on Nuke and Missile Tests Just Blows Up Twitter
Together with the promise of halting nuclear tests, actually the Kim Jong-un regime earlier already indicated that it would not demand the withdrawal of US troops from South Korea as a precondition to the final agreement among the parties concerned, and it has not asked for a reciprocal abandonment of nuclear exercises between South Korea and the United States, so these are very significant gestures of goodwill.

Sputnik: So Mr. Kim also committed to join international efforts to halt nuclear tests all together, what's your take on this change of heart because this is very significant, isn't it?

Dr. Joseph Cheng: We can only speculate, one guess, probably, is that he has come to the realization and actually all parties concerned that military options are too risky, too costly, and obviously President Moon Jae-in in Seoul does not support military options to be exercised by the United States, so obviously all parties understand that it is important, that it is worthwhile to sit down and negotiate.

Then secondly probably the Kim Jong-un regime understands that it has a credible nuclear weapons program, a credible missile program, and that it is in a position to bargain hard for its ultimate objective, namely diplomatic recognition by the United States and to a lesser extent Japan, so some kind of nuclear nonaggression treaty between North Korea and the United States. We are not yet sure whether North Korea is ready to follow the example of China and Vietnam to engage in serious economic reforms and open the door to the world kind of program.

Sputnik: Japan has voice it's cautious optimism regarding Mr. Kim's statement, in your opinion how likely is Mr. Kim to stick to his pledge?

Dr. Joseph Cheng: We are not at all sure about these, as I was saying, gestures of goodwill, which can be easily withdrawn. One certainly does not underestimate the difficulties of reaching a broad agreement between North Korea and the United States, in particular, because there's a certain imbalance.

REA MORE: What You Need to Know About Kim's Decision to Suspend Nuclear, Missile Tests

North Korea wants diplomatic recognition and a pledge not to attack North Korea from the United States, these are only promises, but the United States demands a verifiable, irreversible abandonment of [North Korea's] nuclear weapons program and this is a very substantial act, so how can you achieve an agreement on these asymmetrical demands in the context of rather low mutual trust, so if one chooses to be optimistic in this case, the negotiations are going to be rather difficult, very challenging and may very well involve quite a bit of twists and turns.

Sputnik: What's your expectations then from these upcoming talks?

Dr. Joseph Cheng: One can expect more from the inter-Korean summit because the political will exists on both sides. It is rather easy with the two sides to agree on family reunions, the opening of the Kaesong Industrial Zone in North Korea to South Korean corporations, allowing South Korean tourists to visit North Korea and so on, and they may even come to some kind of agreement to end military hostilities. On the part of the summit between North Korea and the United States they can agree to talk, to continue negotiations without any objectives then that is not bad at all.

The views and opinions expressed by Dr. Joseph Cheng are those of the speaker and do not necessarily reflect those of Sputnik.