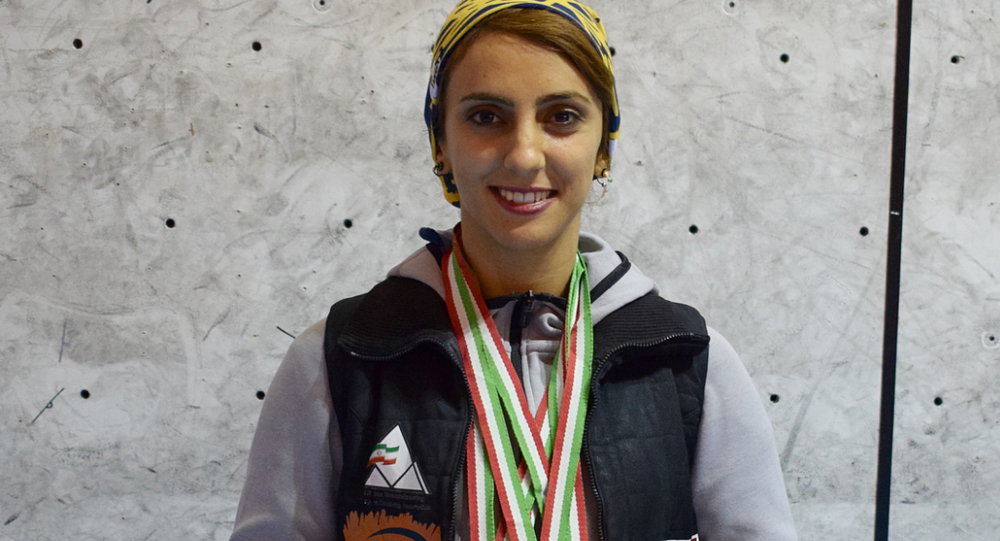 About 200 women annually take part in rock climbing competitions in Iran. Elnaz Rekabi is an Iranian climber who has achieved remarkable success and has risen to international fame. She noted that climbing is a unique sport, which develops not only physical strength, but also fortitude, and both of these factors are equally important for victory.

"At first glance, climbing seems to be very tough and hard sport, but when you begin to engage in it and get to know it closer, you understand that a woman body type is not an impediment, but on the contrary it helps to pass the route more successfully and learn the secret of this sport. That's why women all over the world engage in rock climbing equally with men and even can compete with them on the same level. Gender is not very important in competitive climbing. Moreover, female climbing technique is so interesting that the audience sometimes prefer watching a women's competition more than a men's one," Elnaz told Sputnik.

© Photo : Youtube / 梨视频
Chinese Basketball Court Cleaner Living His Dream (VIDEO)
Elnaz said that she became interested in climbing in her youth when her brother had become an Asian vice champion in competitive climbing at a competition in Zanjan, a city in northwestern Iran. She began to climb in 2001 and she has been the champion of Iran in lead climbing (when you need to reach the top of the rock within a certain time), bouldering (climbing on routes up to 6 meters and on extremely difficult routes with unbelievable inclinations) and speed climbing for already 15 years. Elnaz has won 84 medals: eight gold medals, including a gold medal at the Adidas Rockstars boulder competition in Stuttgart, a golden medal at the Asian Rock Climbing Cup, a silver medal in bouldering at the Asia Climbing Championship, a silver medal at the Asia Climbing Championship in Iran and a bronze medal in lead climbing at the Asian Sport Climbing Championship in Indonesia.

According to Rekabi there has been a breakthrough in the development of competitive climbing over the last few year. Reza Alipour, a record-breaker in speed climbing, and the bouldering team were the most successful. Female climbers also show good results, winning medals at different junior and adult competitions.

At the same time, Elnaz spoke about the difficulties that Iranian sportsmen are faced with. One of the problems is lack of necessary financial support. Elnaz and other sportsmen who represent the national team pay themselves to participate in the World Cup.

"Lack of financing is one of the reasons why we miss many international tournaments. As for me, I have no problem in competing for the last two years because Zarin Iran Porcelain and DWX have become my sponsors provide [me] with sport equipment. But it's a pity that sponsor support has come just now. If that had happened earlier I could have done much more!" Rekabi complained.

Along with competing, Elnaz works as a couch and has been training the junior climbing team for already two years. She loves her young athletes; she is proud of their success and hopes that they fulfill their dreams of becoming world champions. Rekabi noted the role of the Iran Mountaineering and Sport Climbing Federation, which has organized a special program for the development of this sport, in which competitions for children aged 7-8 years are held.

Elnaz has big plans for the future: She will take part in the 2018 Asian Games in Jakarta and hopes that she will manage to get a license to participate in the 2020 Olympic Games. She is currently training to improve her performance and achieve good results at these important competitions.

Agile Raccoon Pretends to Be a Climber