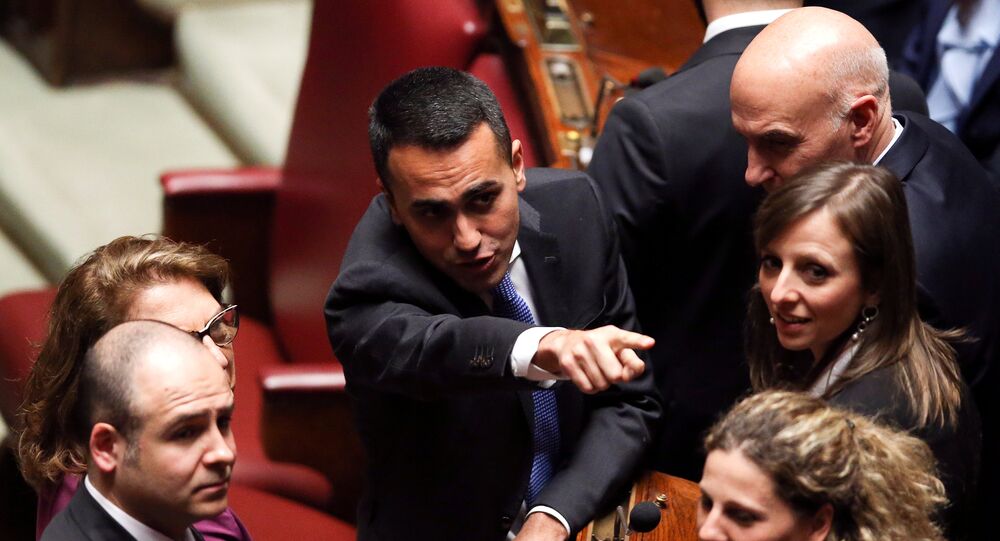 'Di Maio Going to Bed With Berlusconi?' Not Going to Happen - Academic

Italy’s political deadlock could be coming to an end, as Maria Casellati from the Forza Italia is given an exploratory mandate to form a new government. Time is ripe for political stability in the country. We spoke with Anna Bull, professor of Politics, Languages and International Studies at the University of Bath, about the situation.

Sputnik: Can you tell us simply, what's going on in Italian politics right now?

Anna Bull: Well, I'll try to give you a simplified version. As it had been widely predicted before the elections on the fourth of March, the new electoral law that had been passed in 2017 would produce a stored result. In other words, there would be no majority for any party. And this is exactly what happened. So effectively, the Italian parliament is divided in three blocks. The main block is the center right coalition, with 36% of the vote. The second block is the 5 star Movement (5SM) with around 32% of the vote. And the third smaller block is the Democratic Party with 18% of the vote. So, none of the three blocks, has enough seats to form a majority of their own, and there has to be a coalition government, but the negotiations are proving very difficult and cumbersome.

Sputnik: Is Casellati likely to pursue the option of a League-5SM government or a national unity government?

Anna Bull: Casellati is likely to officially register the impossibility of forming a government between the centre right and the 5SM, or indeed between Lega, which is part of the centre right, and the 5SM. So she was only given two days by the president of the Republic, on the assumption that she would fail. So what's the next step? The next step is probably that the president of the Republic will ask the president of the second chamber to try and form a government. He belongs to the 5SM, and is going to try and see whether they can form a government with the Democratic Party. But, according to many commentators, that is going to fail as well. So the third option would be exactly what you said, a government of National Unity. But we are not there yet!

Sputnik: Could a marriage between Berlusconi and Di Maio be possible?

Anna Bull: No that is absolutely not possible — because Di Maio wants to represent something new. He campaigned on a platform which was against corruption, for a new morality in Italian politics.

So, to be seen going to bed with Berlusconi would create a very negative image for his party, so he is not going to do that.

The only thing he said was that he might be prepared to form a government with the Lega, and this government would have the external support of Berlusconi's party. Bust Berlusconi would never agree to this. On the other hand, the Lega only got 17% of the votes on its own. Not as part of the coalition. If he formed the government with the 5SM, which got almost double the percentage, then they would be very much the minor party so they wouldn't agree with that.

Sputnik: So what is expected to happen? How will it end up?

Anna Bull: Things are complicated by the fact that there are going to be Regional elections, quite soon, in two Italian Regions. So in a sense, the parties are still in an electoral campaign, rather than negotiating seriously, so it may take longer because of these. But having said that, I think the only real possibility is a government of National Unity, where the party will pretend that they are not really working together, that they are only working for the benefit of the country, and so on. But effectively we will have to work together- at least in the short term. At least to pass a new electoral law, that is able to produce a winner.