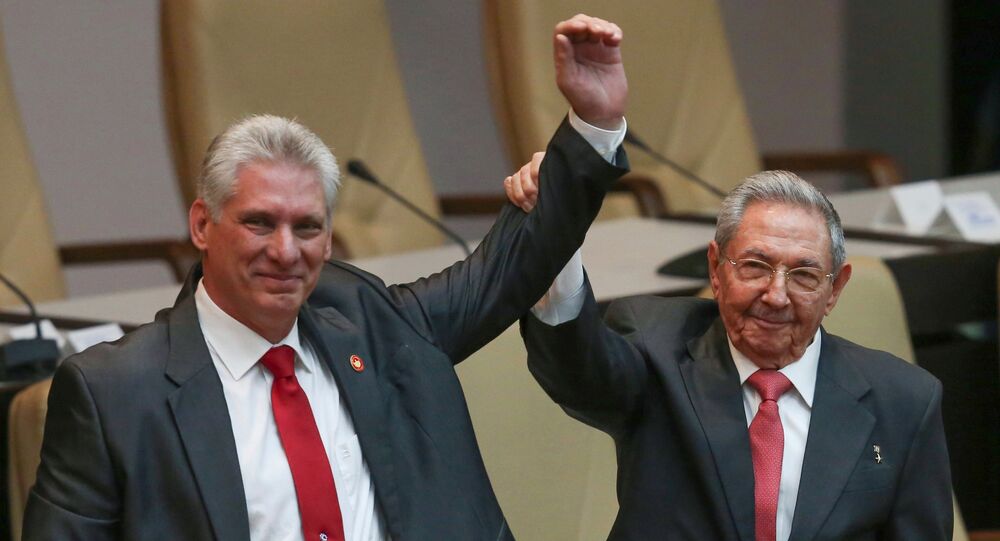 After years of having a Castro hold the presidential office in Cuba, Miguel Diaz-Canel is changing the game for the island country after being elected president on Wednesday.

After soaking up the historical moment, Diaz-Canel launched his term Thursday with a speech evocative of Castro promising to defend and strengthen the socialist revolution.

"The mandate given by the people to this house is to give continuity to the Cuban revolution in a crucial historic moment," Diaz-Canel told the members of the National Assembly before paying homage to Raul Castro, the country's previous president. Raul Castro took over for his brother Fidel in 2008 when Fidel's health began to deteriorate.

​Speaking to Radio Sputnik's Loud & Clear, Arnold August, lecturer, journalist and author of "Cuba and the US in the Age of Trump," stated that Diaz-Canel's taking over as president demonstrates the slight changes taking place within Cuban politics.

"His last name is not Castro and for the first time you'll have someone leading the country who did not participate in the… revolution," August told show hosts Brian Becker and Walter Smolarek. "He was actually born one year after the revolution in 1959 and he's also not from the military ranks, so it's an entirely different situation."

Fellow guest Gloria La Riva, director of the Cuba and Venezuela Solidarity Committee, remarked that the change in power was an example of a "very orderly transition."

"In fact, the theme of the time in this session of the National Assembly is the continuity of the revolution," La Riva said. "I think that's definitely the sense in the population."

La Riva later explained to Becker and Smolarek that the change went so smoothly because "the process began almost two years ago and in the last month there [were] daily explanations [on TV] about the candidates."

"People really do get to know who [the candidates] are," she said.

With Diaz-Canel having an extensive history with the Cuban Communist party, from serving as a leader of the youth wing of the party in the providence of Villa Clara to his time as the head of the Ministry of Higher Education, August suggested that Diaz-Canel was the perfect fit.

"I think that with the leadership coming into the hands of Miguel Diaz-Canel, the latent increasing desire on the part, especially of the Cuban youth, to deepen the revolution, to make sure that the United States does not make any inroads into Cuba, this will further strengthen with Miguel Diaz-Canel as president of Cuba," August said.

He later added that, after speaking with his colleagues in Havana, he got the sense that Cubans were very much in favor of Diaz-Canel.

"They all said that his speech was extraordinary and really something special… [because] he put a lot of emphasis on the need for the Cuban revolution to be self-critical and to look at the problems… and make necessary changes," he told Smolarek.

With Diaz-Canel expected to be proposed as first secretary of the party in 2021, August stressed that it shows "Cuba is really strong on unity."

"They're carrying on the tradition of unity."