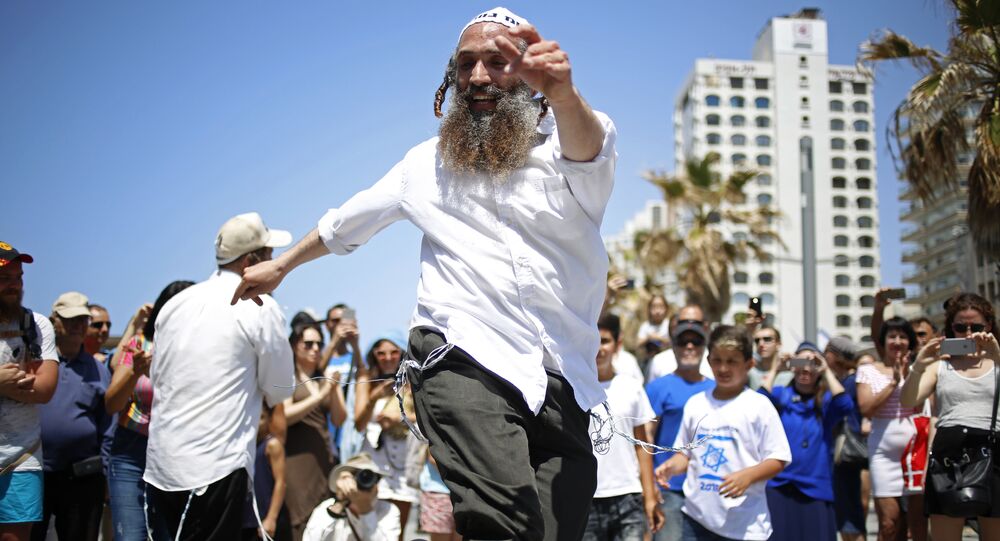 Sputnik: After 70 years of functioning as a state, how would you describe Israel's role in the global arena?

Raphael Ofek: Although the Middle East is considered as a very dangerous district to live in, with bad neighbors, Israel succeeds in being the most stable country in the arena. Israel is recognized in the world as a very strong country militarily, economically as well as in science. Therefore, Israel has now good foreign relations with most of the countries [across] the world: the main powers [of] the US and Russia, China and India; with Australia, Europe, Africa, Latin America; Arab countries [such] as Egypt and Jordan; and even has non-formal relations with Saudi Arabia and the UAE. The Israeli economy is now one of strongest economies in the world. And finally, although Israel is quite a small country, it is recognized as a high-tech and cyber global power.

Sputnik: In your view, what challenges does Israel face?

© REUTERS / Suzanne Plunkett
J.K. Rowling Owns Twitter Users Attempting to Trivialize Anti-Semitism
Raphael Ofek: From the point of view of her security, the challenges which Israel has to cope with are the face-off with Hamas and the Palestinian Authority, Iran and its proxy in Lebanon, Hezbollah. Economically and politically, Israel has to face with the BDS [Boycott, Divestment, Sanctions] movement around the world together with its anti-semitic characters in Europe, and somehow negative relations to Israel in the European Union.

Sputnik: One of the threats regularly identified by Israel is Iran. In your opinion, how serious is the threat from Tehran?

Raphael Ofek: The Iranian threat on Israel is in two dimensions: Tehran may break out from the 2015 nuclear deal renewing [its] military nuclear program. Tehran is striving to build a second battle front against Israel in Syria by constructing military bases on Syrian territory and to have a land corridor in Syria and to [its] proxy in Lebanon, the Hezbollah.

READ MORE: Once US Takes Over Syria, Turkey and Iran's Turn Would Come — Politician

Sputnik: Do you think there's any chance that relations between Israel and Iran will change? What measures have to be taken for these changes to occur?

Raphael Ofek: Opposite to the very good relations between the two countries during the Shah era, before [the] Khomeini revolution in 1979, the present Tehran's clerical ayatollahs' regime is very hostile towards Israel, considering [it] as Satan, and tries to annihilate [it] from the Middle East map. The only change may occur if the present Iranian regime [is] changed. The Iranian nation is fed up [with] the present regime.

Sputnik: In your view, how is it that Israel manages to maintain stable relations with the both the US and Russia, despite both countries having a very different stance on the Syrian conflict?

© AP Photo / Oded Balilty
Eternal Light: How Israelis Celebrate 70 Years of Independence (PHOTO, VIDEO)
Raphael Ofek: Although interests in Syria are not identical to the Israeli attitude, Russia is interested [in preventing] the continuation [of] the military clashes in Syria, in order to avoid any damage to [its] bases in Syria, the Tartus naval port and the Khmeimim airport. Therefore, [Russia] prefers a modus vivendi/modus operandi with Israel. Russia is worried about the Iranian advancement in Syria. Personally, [Russian President Vladimir] Putin has some sympathy, a certain respect to Israel. Many Israeli citizens emigrated from Russia, since the beginning of the 20th century and until now.

Sputnik: US President Donald Trump recently recognized Jerusalem as the capital of Israel. How significant was this for Israel?

Raphael Ofek: Historically, Jerusalem is very important for the Jewish nation. It was [the] Israeli capital even before 3,000 years and was the place of the temple, the most holy place of the Jews.

Sputnik: How do you see Israel's future?

Raphael Ofek: Regarding most of the parameters, I'm optimistic. But peace with the Palestinians will be achieved only if they will stop the terror against Israel's citizens and will recognize Israel's rights to be the Jewish nation-state.

The views and opinions expressed by Raphael Ofek are those of the speaker and do not necessarily reflect those of Sputnik.

'Israel is Trying to Avoid an Escalation in the North'– Ex Deputy Nat. Adviser

'Light is Stronger Than Ever': 70 Years of Israel's Statehood in Pictures