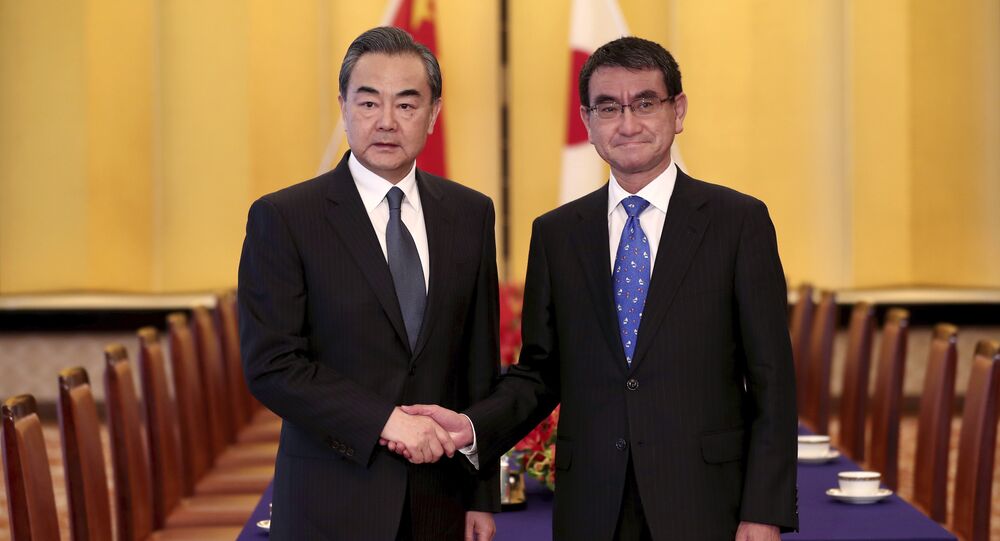 How China is Forming a United Front to Counter Trump's Protectionism

Beijing is taking steps to protect the principles of free trade amid the Trump administration's push for protectionist measures, analysts told Sputnik, referring to China's efforts to boost relations with Japan, the EU and Latin American states concerned with Washington's trade policies.

The China-Japan economic summit aimed at diminishing the consequences of a tariff war unleashed by US President Donald Trump took place on April 16 after an eight-year break; according to Jiang Yuechun, director of the Chinese Institute of International Studies' Center for World Economy and Development, the results of the meeting have surpassed all expectations.

"There are two main trends in the world economy — globalization and anti-globalization that is represented by Trump's protectionism and his actions in this direction," the academic told Sputnik China. "Under these conditions, the consensus reached during the China-Japan economic summit regarding the protection of multilateral trade system and principles of trade by the two countries is the answer to the protectionist trend."

The academic underscored that the two countries have also taken steps toward a political détente, which is especially important given their role in the Asia-Pacific region. He believes that the process of regional integration is doomed without mutual cooperation between China and Japan.

"As a result of the economic dialogue, the parties reached a consensus on regional, global and bilateral economic issues. This result surpassed my forecasts," Jiang stressed.

Japan and China Pushing Ahead With RCEP

What is especially interesting is that Japan is pushing ahead with RCEP, which was traditionally regarded as a China-led project, the academic emphasized.

"Trump's decision [to exit the TPP], in fact, deprived Japan of the huge US market," Arapova explained. "The prerequisites for a more intensive development of relations between Japan and China appeared precisely when Trump came to power and disrupted the TPP. The summit held [by China and Japan] can play into the hands of both countries in terms of minimizing the consequences of the trade war."

China is skillfully diversifying its trade and investment ties, the Russian academic noted. She highlighted that China is primarily interested in access to Japan's high-tech production and technologies in various fields. For its part, Japan is seeking to enter the Chinese "capacious" market which continues to grow due to Beijing's measures aimed at the stimulation of domestic consumption.

Beijing Seeking Allies Amid Tariff War With US

© AFP 2020 / MIKKO STIG / LEHTIKUVA
Trade War: US Plans to Hit Back at China's Crackdown on US Tech Firms
Meanwhile, Beijing is taking further steps to mitigate the potential trade war risks. On April 18, Yan Pengcheng, spokesperson with the National Development and Reform Commission (NDRC), announced that "China has prepared multi-level response plans and backup policies for the US-initiated trade frictions."

"China, with a population of nearly 1.4 billion, has a huge domestic market, and even if the east goes dark, the west still shines," Yan said as quoted by Xinhua, asserting that trade difficulties with the US will have a "limited and controllable" impact on the Chinese economy.

Additionally, observers suggest that China could use the Summits of the Americas, which took place on April 13-14 in Lima, Peru, to boost ties with Latin American countries which could be potentially affected by the US-China tariff war.

© AP Photo / Andy Wong
China Prepares Emergency Response Plan Amid Trade Showdown With US
On April 17, Reuters reported, citing sources familiar with the matter, that last week Chinese Vice-Commerce Minister Fu Ziying held meetings with the ambassadors from France, Germany, Great Britain, Spain, Italy and the European Union, asking them to team up against the US protectionism.

According to observers, Beijing is seeking to strengthen ties with Washington's European allies to protect the principles of free trade within the framework of the World Trade Organization (WTO). Trump's tough tariff measures have disappointed many of America's European allies.

India could become yet another Chinese ally in the "struggle" against the Trump administration's protectionism. On Wednesday, a source in the Federation of Indian Chambers of Commerce and Industry (FICCI) told Sputnik that following in the footsteps of the EU and China, India has reached the WTO seeking compensation from the US for the loss in steel and aluminum exports due to the new US import tariffs.

© AP Photo / Ted S. Warren
Experts: China to Focus on Domestic Reform, Diplomacy Amid US Trade Crackdown
In March 2018 Trump introduced 25 percent and 10 percent tariffs on steel and aluminum imports, respectively. Later, the US president signed a memorandum to impose $50-60 billion in extra tariffs on China over what he called "unfair trade practices." In early April, the measure came into force.

A few days later the White House signaled that new tariffs could affect $100 billion worth of Chinese imports. The move came as a response to Beijing's tit-for-tat move, which envisaged taxing $50 billion in American products.

Commenting on the US-China standoff, Managing Director of the International Monetary Fund (IMF) Christine Lagarde denounced protectionist measures and warned that the world trade system of "rules and shared responsibility is now in danger of being torn apart."