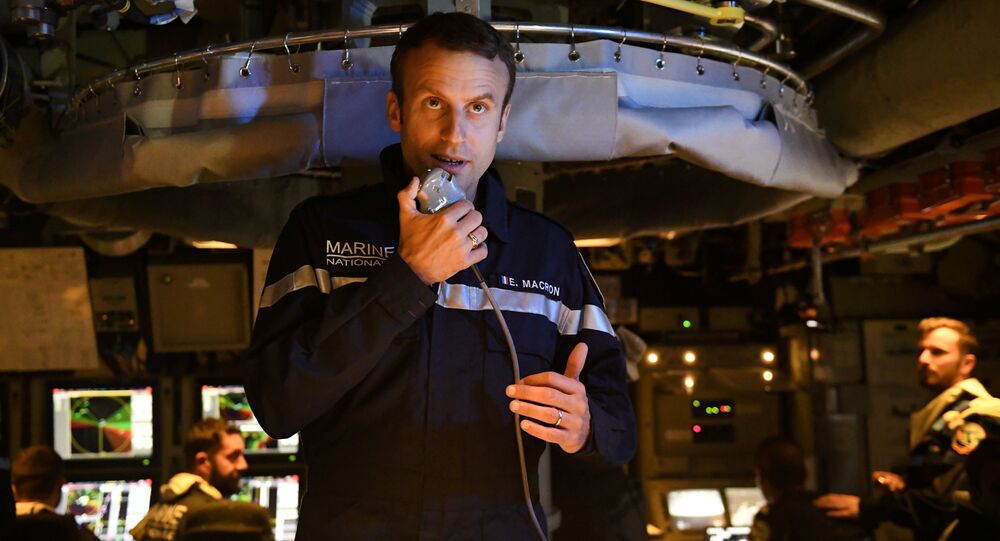 Sputnik spoke to Dr. Binoy Kampmark, a Senior Lecturer at RMIT University, Melbourne and former Commonwealth Scholar at Selywn College, Cambridge University; who is also a contributing editor to CounterPunch to find out more about the France's role in Syrian conflict as well as about the recent Emmanuel Macron's statements on the topic.

Sputnik: What are your thoughts on Emmanuel Macron’s statements? Do you think he played such an important role in impacting Trump’s decision on Syria?

Dr. Binoy Kampmark: Macron is playing what has been termed a more ‘reserved’ game to his predecessors Sarkozy and Hollande, who both felt that French power should be projected militarily in Africa and the Middle East. The previous two were far more aggressive, destabilising Libya and, in Hollande’s case, hoping for direct intervention in Syria with strikes, in a joint operation with US forces, after the Ghouta chemical attack of August 2013.  Hollande and his foreign minister Laurent Fabius never quite forgave US President Barack Obama for backing down from his initial threat.  Macron has now decided, in light of the position taken in summer, that there will be “red lines” on international norms that cannot be ignored lest a power be seen as weak.

Sputnik: How would you evaluate France’s role in the Syrian conflict?

Dr. Binoy Kampmark: France is pursuing its role as a revived colonial power, of sorts. It has treasured a role in interfering in Middle Eastern states since its days of empire, and has been aggressively seeking an overthrow of the Assad regime, sponsoring a range of anti-Assad forces.  Macron, to be fair, did moderate the stance, claiming Assad to have no “legitimate successor”.  But the issue of bringing the US in the conflict more and keeping them there suggests that he is trying to look like a unifying force of the triad (US, UK and France). He has also decided to commit French forces in what will become a long term garrisoning of parts of Syria to preserve the Kurdish element of the Syrian Democratic Forces against Islamic State resurgence and Turkish expansion.

© AP Photo / Olivier Matthys
'European Civil War' - Macron Criticized after Going Full Napoleon in Strasbourg
Sputnik: In your opinion, why did France engage in the Syrian strikes along with the US and UK when other Western allies like Germany withheld from the strike?

Dr. Binoy Kampmark: Germany is too mired in domestic politics and specifically European matters at the moment. The UK is labouring under the effects of negotiating for Brexit. President Donald Trump of the US is claiming to want to withdraw from Syria. His Friday speech claimed that the United States should not take the role of purging the role of tyranny in the globe, and that the US needed to bring its warriors back home. Macron evidently thinks that some role should for the US is still required though it seems he would like to manage it, including using French influence more broadly speaking. This may well be his chance to take the lead.

Sputnik: Macron has previously called for Europe to be more independent from the US, however, aligned himself with Washington in the airstrikes, in your opinion have Macron’s views on an independent Europe changed?

Dr. Binoy Kampmark: I do not think his views on this have changed. His approach to the US reminds me of that taken of Britain after World War II: to be the Greeks of wise to the Romans of new. European states are puzzled by Trump and his policies, and Macron is attempting to steady things. The issue is to keep the European project going but to not let the US withdraw altogether in terms of influence and power. The US still remains, to use the words of Geir Lundestadt, an “empire by invitation”.

Sputnik: The airstrikes have been criticized by many political parties both left and right wing, what consequences can this have on the political base in Europe?

Dr. Binoy Kampmark: The parties of the left and right of Europe disagree with the strikes on ideological grounds (there is, certainly in France, an admiration for the Russian cause in Syria), but they also see little gained in continued involvement on the part of France and European powers in what essentially looks like a revived colonial theatre of conflict. Persisting in this conflict also continues the refugee crisis which has destabilised Europe and encouraged a rigorous critique of refugees by such figures as Viktor Orban of Hungary. Domestically, prolonging the conflict has also led to a fermenting of patriotic and reactionary impulses.

© AFP 2020 / PASCAL GUYOT
'This Is Not France': Frenchman Renounces Citizenship to Protest Attack on Syria
Sputnik: Various polls have also indicated that the citizens of various European states oppose the strikes, do you think we will see more public outcry against French and British leaders?

Dr. Binoy Kampmark: There will be a continued outcry against the leaders of the UK and France. The issue that stays in the mind here is that of Libya in 2011. That particular intervention destroyed the Qaddafi regime and split a country, precipitating a regional crisis that has yet to heal across North and Central Africa. Macron was also critical of his predecessors, accusing them of being “neo-conservative”. He does risk, however, falling for that very same mistake in his continued involvement in Syria.