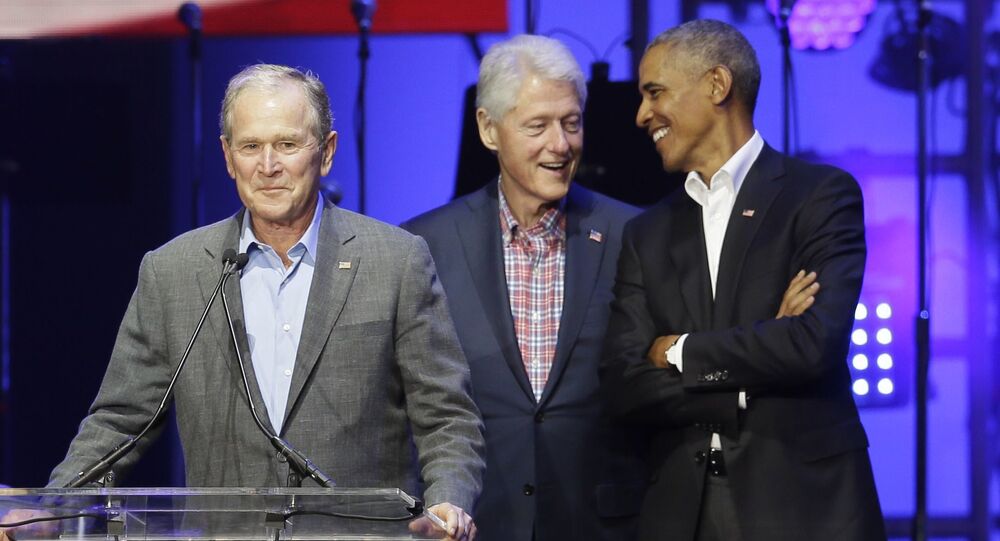 Donald Trump's address explaining his decision to order strikes against Syria over an alleged chemical attack was rich on the words "animal," "evil" and "despicable," but offered no evidence that the chemical attack took place, or that Damascus was responsible. Sputnik recalls a few other times US leaders justified aggression on false pretenses.

In his speech, Trump accused the "Assad regime" of using "chemical weapons to slaughter innocent civilians" for the second time in a year, calling this "massacre" a "significant escalation in a pattern of chemical weapons used by that very terrible regime." He also accused Russia of "failing" to keep its promise to destroy Syria's chemical weapons stock and urged Moscow to "join with civilized nations as a force for stability and peace."

The speech was eerily reminiscent of remarks Trump made last April over his decision to bomb Syria, again over an alleged chemical attack. Here too he accused "Syrian dictator" Bashar Assad of a "very barbaric attack," and ordered the military to launch Tomahawk missiles at a Syrian airbase, calling on "all civilized nations to join us" in "end[ing] the slaughter and bloodshed in Syria."

The speeches were followed by footage of US naval and air forces attacking Syria; both strikes proved highly ineffective. The Syrian Air Force resumed flights from the airbase struck in April 2017 just a day afterward. A similar picture emerged after Saturday's attack. Although the strikes did level an academic institution north of Damascus, in the capital itself residents celebrated bringing down 'invisible American Tomahawks'. A Russian defense ministry report on the attack confirmed that Syrian air defenses intercepted 71 of the 103 cruise missiles launched.

Both attacks were approved on the basis of claims made by Syrian opposition media and controversial NGOs, and later picked up by Western media and governments. Each time the allegations were based on reports by 'monitoring and activist' groups like the White Helmets, a group investigative journalist and Syria specialist Vanessa Beeley has described as 'al-Qaeda's civil defense.' Following the alleged April 2018 chemical attack, Russian chemical warfare defense specialists deployed to the region found no evidence that an attack took place. Organization for the Prohibition of Chemical Weapons (OPCW) specialists didn't arrive in Syria until Saturday, after the US, the UK and France had already carried out their strikes.

But the dubious nature of the 'evidence' used to justify Trump's Syria strikes is not new, and just part of the same cookie cutter pattern the US has used for at least 20 years. Not convinced? Watch these videos:

On March 24 1999, President Bill Clinton issued a televised address to the nation, telling Americans that the US would be bombing Yugoslavia to prevent "genocide" in Europe. The president accused Yugoslav President Slobodan Milosevic of "sen[ding] his troops and police to crush" Kosovar Albanians' peaceful ambitions for autonomy. "In short, if President Milosevic will not make peace, we will limit his ability to make war," Clinton said.

What followed was a 78-day NATO bombing campaign, which led to upwards of 5,700 civilian deaths, and contaminated areas of Kosovo and central Serbia with depleted uranium. In May 1999, the Hague indicted Milosevic for crimes against humanity in Kosovo, later tacking on charges over crimes in Croatia and Bosnia as well. His trial began in 2002 and lasted until his death in his Hague cell in 2006, allegedly of a heart attack. In March 2016, the International Criminal Tribunal for the former Yugoslavia admitted that it did not have sufficient evidence to support a prosecution. Kosovo unilaterally declared independence from Serbia in 2008.

On March 19, 2003, President George W. Bush made perhaps the most infamous speech of the 21st century, telling Americans that the US, the UK and their allies had begun an invasion of Iraq. "The people of the United States and our friends and allies will not live at the mercy of an outlaw regime that threatens the peace with weapons of mass murder. We will meet the threat now, with our Army, Air Force, Navy, Coast Guard and the Marines, so that we do not have to meet it later with armies of fire fighters and police and doctors on the streets of our cities," Bush said, alluding to the 9/11 terror attack (which Iraq had nothing to do with).

The US never did find those "weapons of mass murder" Bush was talking about, and the Iraq invasion not only severally undermined America's reputation abroad, but resulted in the spread of chaos in the country, leading to the rise of Daesh in 2014.* The war led to hundreds of thousands of Iraqi civilians, with coalition forces losing over 4,800 troops, and cost the US over $2 trillion.

On March 28, 2011, President Obama addressed Americans on "the situation in Libya." There, he said, peaceful protesters taking "to the streets across the country to demand their universal rights," were facing the repression of the "brutal regime" of Muammar Gaddafi, who, in Obama's words, "clearly lost the confidence of his people and the legitimacy to lead."

"Left unchecked, we have every reason to believe that Gaddafi would commit atrocities against his people. Many thousands could die. A humanitarian crisis would ensue. The entire region could be destabilized, endangering many of our allies and partners…The democratic values that we stand for would be overrun," Obama said. For this reason, the US and its allies began a campaign of strikes in the country to protect civilians and "hol[d] the Gaddafi regime accountable."

True to Obama's word, the US and a dozen of its NATO allies began strikes on Libya, culminating in the destruction of the Libyan government and the victory of anti-Gaddafi rebels. Since then, tens of thousands of Libyans have died, the country collapsed into several warring factions, and turned into a transit point for Middle Eastern and African refugees heading for Europe. Obama later admitted that the aftermath of the Libya attack was the 'worst mistake' of his presidency.

Incidentally, president-to-be Trump opposed the Iraq and Libyan interventions, just as he stepped out against Obama's plans to bomb Syria some two years later.

All former Bush administration officials should have zero standing on Syria. Iraq was a waste of blood & treasure.

As bad as Qaddafi was---what comes next in Libya will be worse---just watch.

*Also known as ISIS, a terrorist group banned in Russia.