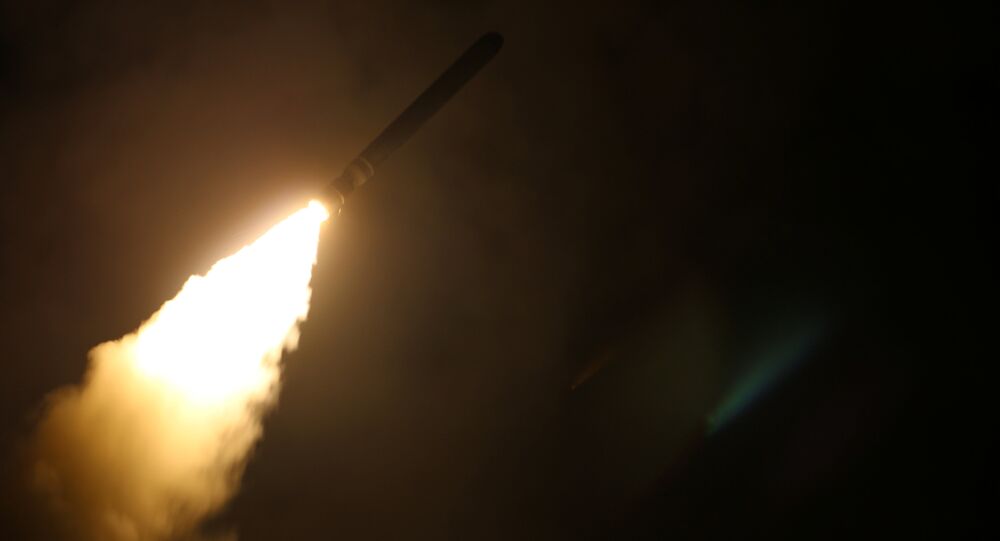 Touching upon Saturday's missile attack on Syria, which was launched by the US, the UK and France, the former commander of the Russian Baltic Fleet told Sputnik that a thorough analysis is needed in order to take steps towards retaliation, not least on the diplomatic front.

Admiral Vladimir Valuyev, former commander of the Russian Baltic Fleet, said that "despite the opinion of sober-minded states and sober-minded people, the aggressors' provocative attack did take place."

"Judging by the fact that it took them [the US, Britain and France] more than an hour to conduct a joint missile strike, we can assume that the three had failed to take coordinated action," Valuyev pointed out.

He stressed that for a successful attack, it is important that the missiles fly up to the targets  imultaneously, something that was not the case with US, UK and French missiles.

© REUTERS / U.S. Air Force
A U.S. Air Force B-1B Lancer and crew, being deployed to launch strike as part of the multinational response to Syria's use of chemical weapons, is seen in this image released from Al Udeid Air Base, Doha, Qatar on April 14, 2018

"It added to the fact that the outdated Soviet-made air defense systems, which are currently in service with the Syrian Army, downed more than 70 of the 110 modern high-precision missiles," Valuyev said.

According to him, if this missile attack was staged in a zone the Russian Armed Forces had oversight over, where advanced air defenses are on standby, the probability of intercepting the missiles would be close to 100 percent.

Valuyev also noted that the missile strikes did not target the goals that the chief of the Russian General Staff spoke about last month.

"They instead attacked secondary targets, which were groundlessly and randomly picked by the US military and political leadership as objects for the production and storage of chemical weapons," he added.

Valuyev suggested that judging by the number of US, UK and French warships and aircraft deployed near Syria, they planned to use about 300 units of ammunition in a joint strike.

"They have used [just] a third of the total number of the missiles. All this should be analyzed in order to take retaliatory measures, first of all, on the diplomatic front," he concluded.

Early in the morning on April 14, US President Donald Trump announced his decision to launch a missile strike on Syria's military and civilian facilities, in response to unverified reports blaming Damascus for using chemical weapons in the Syrian city of Douma.

According to the Russian Defense Ministry, a total of 71 missiles out of 103 were intercepted by Syria's air defenses while approaching their targets between 3:42 and 5:10 Moscow time.

Facebook Live / ‎عبدو زيتون‎
Multiple Syrian Military Bases Reportedly Targeted By US, UK and French Airstrikes (PHOTOS,VIDEOS)
The Russian air defense units did not participate in the interception as no missile entered their areas of responsibility.

On Friday, the Russian Defense Ministry stated that they had proof that the alleged Douma chemical attack had been a false flag which was staged by Western-backed NGOs, including the White Helmets, in an effort to prompt the US to launch a strike on Syria.

In March, General Valery Gerasimov, the Russian military's chief of staff, warned that Moscow would shoot down any US missiles fired on Syria if they threatened members of the Russian army.

The views and opinions expressed by Vladimir Valuyev are those of the speaker and do not necessarily reflect those of Sputnik.