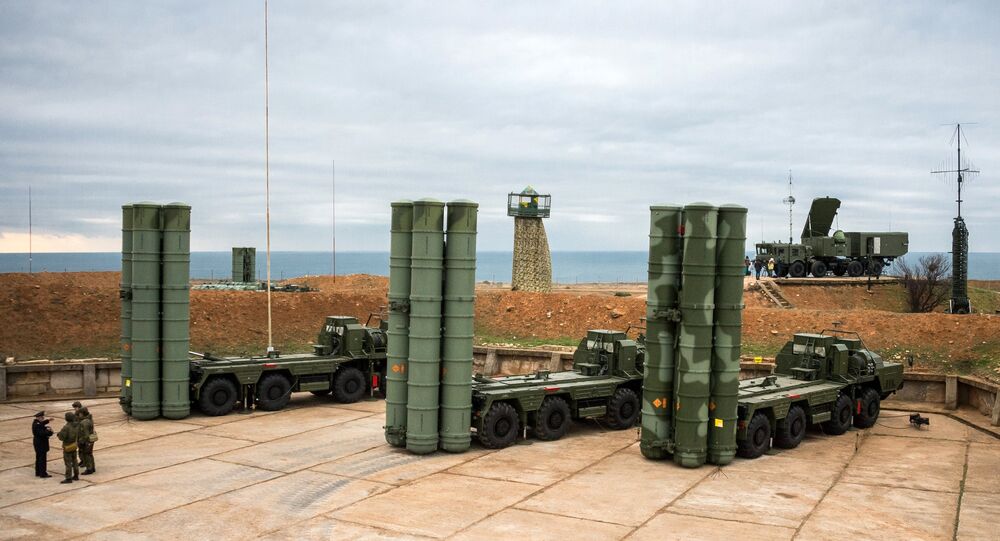 As India is the largest importer of arms, it is in America’s own interest to not antagonize the country by trying to stop it from restocking its mostly Russian-origin arsenal, says Indian defense analyst Amit Cowshish.

New Delhi (Sputnik) — Amid conflicting views emerging from the United States over the possible impact of the Countering America's Adversaries Through Sanctions Act (CAATSA) on defense deals between India and Russia, including that of the S-400, India's former financial advisor to the defense ministry has said that it would be unrealistic on the part of the US to think that India can stop dealing with Russia, which has been a longtime friend and supplier of arms and technology to India. Amit Cowshish, former financial advisor (acquisition) with the Indian Ministry of Defense, said that it is in America's interest to put India on the list of exceptions under the sanctions act.

"India is presently the largest importer of arms in the world and a lot of it comes from the US. With a shrinking defense market, it is in US's interest not to let anything affect its growing defense trade with India. Putting India under the sanction list could actually be counter-productive for the US as India has many other options: France, Israel, other European countries, and indeed Russia itself," Amit Cowshish told Sputnik.

The CAATSA is designed primarily with Russia in mind, and specifically, countries that continue to use Russian military hardware and systems. The law imposes sanctions on individuals and countries that deal with Russia's intelligence and defense sectors. As India comes under Section 231 of CAATSA, applying the legislation against India could put the US foreign policy and defense establishment in a bind with their expanding cooperation with India.

Last week, it emerged during Indian Defense Minister Nirmala Sitharaman's visit to Moscow that both countries are going ahead with negotiations on a contract for the delivery of S-400 Triumf missile systems. The contract is expected to be signed during the annual bilateral summit in October this year.

© Sputnik / Grigoriy Sisoev
US Senate Warns Russia of Sanctions if S-400 Sold to Any Foreign Nations
Both sides have fully finalized the technical parameters of the contract; however, they have not yet agreed on the price of the deal. Both countries are also at the advanced stage of conclusion for the procurement of four upgraded Krivak III guided-missile frigates for the Indian Navy and the deal is expected to be signed before the annual summit. Discussions during Nirmala Sitharaman's visit to Moscow with her Russian counterpart have also indicated that both countries have not been dithered by the CAATSA.

Meanwhile, some American lawmakers have argued that the latest Indian move to purchase S-400 air defense missile from Russia could come under the category of "sanctionable activities." However, a top US defense department official has said that the Pentagon is very concerned over possible implications on India.

"We understand India's concern about this and we are very concerned as well. These sanctions are intended to target Russia — not India," Joe Felter, deputy assistant secretary of defense for South and Southeast Asia, told PTI on April 5.

New Delhi had expressed its concern to Washington last month during the visit of Foreign Secretary Vijay Gokhale to the US.

"We are concerned about anything that's going to make it more difficult for us to cooperate. But it's just out of our hands… this legislation. I can't anticipate what will actually happen. Any decision to impose sanctions is made outside of DoD," Felter added.

© Sputnik / Vladimir Astapkovich
Kaspersky Lab CEO 'Shocked and Confused' by US Ban of Company's Products
India topped the list of the biggest importer of weapons between 2013 and 2017. According to the Stockholm International Peace Research Institute (SIPRI), India's arms imports have increased by 24 percent over the last 10 years. Russia remained India's largest supplier of arms in 2013-2017. Russian arms were 62 percent of India's imports. Amit Cowshis says excluding India from the sanctions list is also reminiscent of the US' larger political goals in South Asia.

"On the contrary, continued engagement with India would also serve the US interest vis-a-vis China. In any case, it would be unrealistic on the part of the US to think that India can stop dealing with Russia, which has been a longtime friend and supplier of arms and technology to India. A large proportion of India's inventory still comprises Soviet/Russian-origin equipment which means that India cannot afford to burn its bridges with its old ally even under the threat of being put on the sanction list," Cowshish added.

Last month, a top commander of the US had categorically asked the Senate to make an exception for India under CAATSA, arguing that the US cannot expect India to abruptly stop using Russian arms. Harry Harris, the commander of the US Pacific Command, told members of the Senate Armed Services Committee during a Congressional hearing that seventy percent of New Delhi's military hardware is Russian in origin and "You can't expect India to go cold turkey on that… I think we ought to look at ways to have a glide path so that we can continue to trade in arms within India," Admiral Harris said.

70 Years of India-Russia Relations: Celebrations to Continue Till October