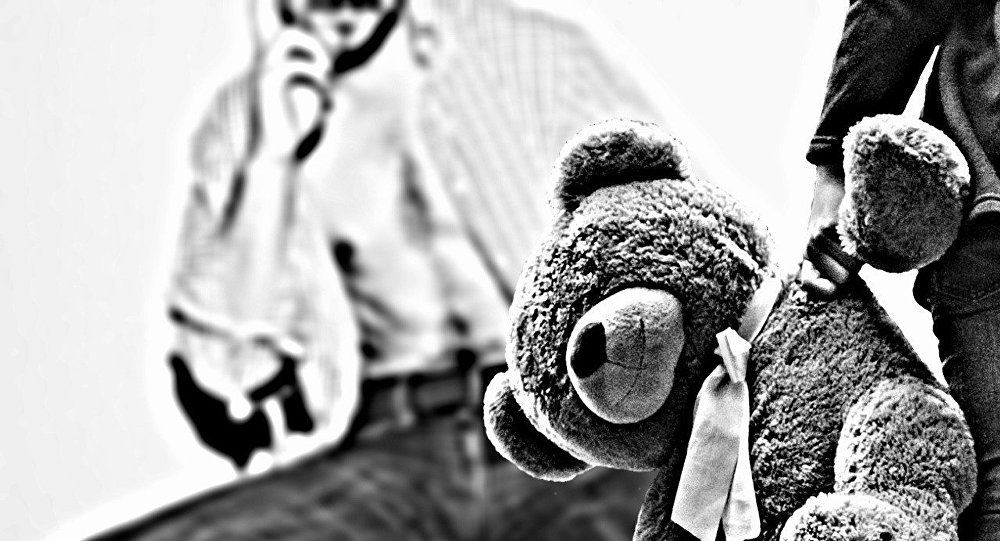 In March 2018, shock and outrage surged across Britain as the true extent of a historic child sex abuse ring in Telford, Shropshire was uncovered in the mainstream media.

In what has since been dubbed the "worst ever" child abuse scandal in British history, as many as 1,000 young local girls may have been groomed for sex by a 200-strong syndicate of British-Asian men. Victims were said to have been trafficked, drugged, beaten, raped and in some cases even murdered.

While the scale of the criminal conspiracy, and the specific offenses involved, predictably sickened members of the public far and wide, so too did allegations local authorities knew about the problem in the early 1990s, and failed to maintain details of abusers in Asian communities for fear of being labeled racist.

© AFP 2019 / Lindsey Parnaby
Police officers stand guard as members of the English Defence League (EDL) demonstrate on Bridge Street in Bradford city centre, west Yorkshire, on October 12, 2013.
Many social workers and victims testified Telford police and council were unwilling, unhelpful and sometimes intentionally obstructive of their efforts to report and prosecute perpetrators. In a particularly perverse instance, police failed to investigate a case five times until a member of parliament intervened — in another, a victim claimed officers discouraged her from pursuing her case after she told them she was speaking to journalists.

However, for those who have been researching the grooming phenomenon in the UK for some time, the Telford exposures were hardly revelatory. Among them is Peter McLoughlin, author of the 2014 work Easy Meat, which delved into the issue of grooming gangs in forensic detail.

For years, Peter believed grooming gangs to be a "racist myth", perpetuated by far-right demagogues. However, his fundamental assumptions were challenged in 2009 when he met people who said their children had been abused in this manner like this. These individuals' immediate and extended families had many non-white members — reasoning they were unlikely to be racists, He began to dig deeper into the issue. What he found shocked him.

Peter notes one of the "defining features" of grooming is the ethnic/cultural homogeneity of the gangs, and the refusal of members of their community to speak out about or condemn their behaviour.

Moreover, gangs are typically made up of brothers, and/or members of an extended family, who all take part in the grooming and/or rape of young girls. In the UK and in other countries affected by the phenomenon, the gangs are overwhelmingly men — and Muslim.

"In Britain, sexual abuse of children mostly involves white men — but the UK is 90 percent white. With grooming gangs, the prevalence of Muslims is so out of proportion with their numbers in Britain, ethnicity becomes highly significant. This reality must be addressed first and foremost when dealing with this crime. Islamic backgrounds dominate the profiles of ‘localized groomers', suggesting Muslim culture finds this crime far more acceptable than do other ethnicities in Britain," Peter told Sputnik.

Despite being widespread, Peter suggests British authorities have "deliberately ignored" the issue for decades — despite politicians, law enforcement agencies and officials, charities, social workers, academics and journalists being fully cognisant of the phenomenon for some time, grooming was rarely if ever documented by the mainstream media, the campaigns of child-care charities, official reports, or academic works. What accounts for this failure to acknowledge an undeniable reality?

"Stringent political correctness, and a fear of being labelled racist, ensured people didn't speak out,in the process enabling perpetrators to sexually abuse schoolgirls for decades with impunity. This, in an age where parents can be prosecuted for smacking their children! While the Rotherham scandal breaking ended this conspiracy of silence, it wasn't entirely shattered — the public know only a fraction of the true story. Grooming gangs are an epidemic in the UK, and have been operating for over 30 years," Peter told Sputnik.

Rotherham was, prior to Telford, home to the "biggest child protection scandal" in UK history. There, organized child sexual abuse continued almost unchallenged by legal authorities from the late 1980s to the early 2010s, with up to 1,400 children affected. The abuse included gang rape, forcing children to watch rape, dousing victims with petrol and threatening to set them on fire, threatening to rape victims' mothers and younger sisters, and trafficking them to other towns. Several victims also became pregnant —one aged 12.

However, prior to the case making national headlines, the town had never been publicly associated with organized child abuse — although local government agencies there knew about local grooming gangs as early as 1996, when Rotherham council conducted an investigation into organized grooming.

Its resultant report identified most perpetrators as Pakistani Muslim men — Kurdish Muslims and Kosovan Muslims were also acknowledged to be responsible.

The next year, Rotherham council created a youth project, Risky Business, aimed at helping girls aged 11 — 25 at risk of sexual exploitation. Its chief, Jayne Senior, soon concluded a localized grooming network was operating in the town — and collected so much information about the perpetrators police suggested she start forwarding it to an electronic dropbox on the South Yorkshire Police computer network. Senior, who earned an MBE in 2016 for her role in uncovering the scandal, later learned that police did not read anything she submitted to the dropbox, and its contents could not be accessed by other forces.

Moreover, a 2010 internal Rotherham Safeguarding Children Board memo stated "great care will be taken in drafting this report to ensure its findings embrace Rotherham's qualities of diversity. It is imperative suggestions of a wider cultural phenomenon are avoided."

A 2013 independent inquiry headed by Professor Alexis Jay attributed official failure to address abuse in Rotherham to a number of factors relating to race, class and gender. These included contemptuous and sexist attitudes toward mostly working-class victims, fear perpetrators' ethnicity would trigger allegations of racism and damage community relations, the Labour council's reluctance to challenge a Labour-voting ethnic minority, and a desire to protect the town's reputation.

A palpable demonstration of how political correctness suppresses the truth about grooming gangs,Peter feels, occurred in 2004. In May that year, Channel 4 was preparing to broadcast a ‘Dispatches' documentary — Edge of the City — dealing with Muslim grooming gangs in Bradford, northern England.

The project was the culmination of an almost decade-long inquiry by director Anna Hall — she'd been contacted by the city's Barnardo's branch in October 1996, with a view to producing a film warning children and parents about a pattern of child sexual exploitation in the area. As Hall later recounted,local men were targeting girls aged-11 and up, giving them phones, and showering them with attention and affection — when they eventually had sex, the men would introduce their friends to the girls, and they would be coerced into sleeping with them too.

"Police seemed powerless to stop it because the girls thought these men were their boyfriends…the girls were white and the perpetrators were Asian.Men were gang-raping young girls and everybody wanted to pretend it wasn't happening. All anyone seemed concerned about was the risk of a race riot if we mentioned it," Hall has said.

It would be almost seven years before Hall began filming — and despite authorities of every stripe evidently being well-aware of the pestilential phenomenon,there were no arrests, much less prosecutions, in the intervening time.

The completed documentary could have changed that — and produced widespread public concern about Muslim grooming gangs. Hall states the film "dared" to describe the Bradford perpetrators as "overwhelmingly Asian".

However, after reviewing the documentary, Bradford council sought to block its broadcast. Colin Crampton, West Yorkshire's Chief Constable, successfully secured a postponement, on the basis it could impact the result of the impending local elections in Bradford, and potentially produce "race riots" — skirmishes between local youths, split along racial lines, had engulfed the city three years prior.

Peter's take on the incident is stark.

"A national broadcaster crumpled to pressure from an individual who should himself have been facing investigation for the failure of his underlings, and allowed the threat of massive violence by members of Bradford's Muslim community to temporarily suppress vital information. That this was allowed to happen because it could've influenced the outcome of an election beggars belief, and is a clear demonstration of how the UK is not a democracy in any meaningful sense," Peter told Sputnik.

In 2013, a House of Commons report acknowledged "localized grooming" was an issue in the UK, and the available evidence showed Muslims were hugely disproportionately represented among the perpetrators. However, the authors strongly implied the issue was restricted to towns that had been the subject of national scrutiny, such as Bradford and Rotherham.

Peter conversely believes there is reason to believe grooming is a national problem, with such gangs operating in "almost every major town in England" — in fact, he suggests it likely the only towns where gangs do not operate are those "without a mosque."What's more, he suspects authorities will only continue their cover-up of the nationwide scandal, producing many thousands of new victims across the UK every year.

"Easy Meat was an attempt to wake the public up, and get them to demand civilized solutions to the problem. I feared people could turn to vigilante justice to deal with it if politicians didn't act. However,I expect in ten years the book will still be years ahead of mainstream debate on this issue. Any hope I had of the country changing course has faded now. All one can do now is document the ongoing decline," Peter concludes.

Missing Piece of Telford Puzzle 'Who Is Buying Into This?' - Analyst