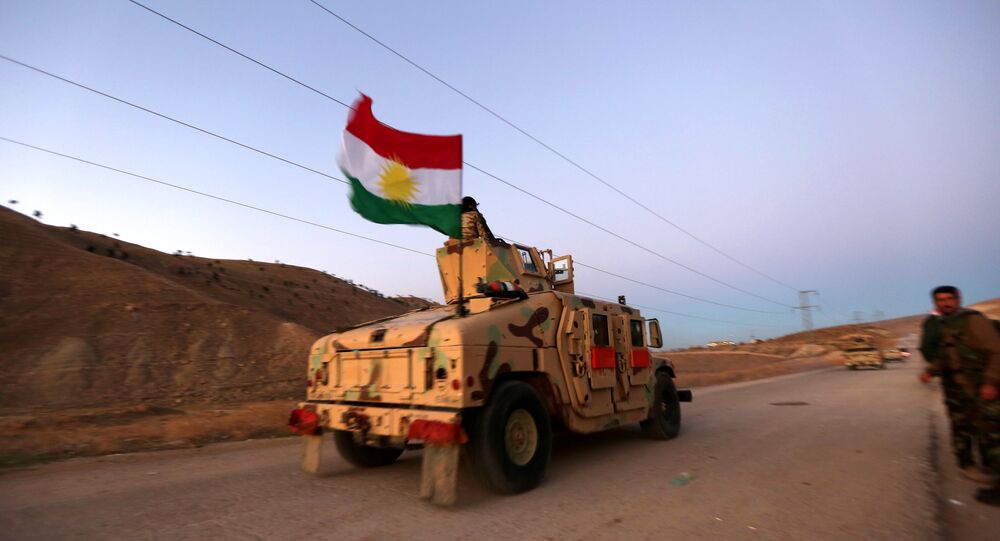 The Iraqi town of Sinjar risks turning into a second Afrin, after Turkish ground forces reportedly invaded the territory of northern Iraq under the pretext of the fight against Kurdish militants, Iraqi observers told Sputnik. It was earlier reported that the militants had left the region in accordance with the demands of local authorities.

"A ground invasion by the Turkish armed forces of the territories north of Erbil, the capital of Iraqi Kurdistan, is a violation of Iraq's sovereignty," Karim an-Nuri, one of the leaders of al-Hashd Al-Shaabi (the Popular Mobilization Forces), an Iraqi state-sponsored umbrella organization comprising Shiite militias, told Sputnik Arabic.

According to an-Nuri, there is still a possibility to solve the problem through diplomatic means, which requires the Iraqi foreign minister to apply to the UN Security Council.

"We oppose this invasion as well as other Turkish military operations in the territory of the Iraqi state," the commander emphasized. "Iraq can protect its land itself, no other state has this right. We won't allow Iraq to become a platform for conflicts between third parties. We advocate a peaceful resolution of the conflict."

"Turkish forces crossed the border with Iraq and moved 10-17 km (6.2-10.5 mi) inside the country," Mahmud pointed out. "The military operation is being conducted under the pretext of fighting the PKK, which Ankara has been involved in for many years. However, only now the media has begun to cover this issue in depth. This is due to the latest Turkish threat that Sinjar would be occupied and would turn into a second Afrin."

On March 26, Turkish President Recep Tayyip Erdogan reiterated his earlier pledge to kick off a military operation against the PKK in Iraq's northern Sinjar region in case Iraqi forces fail to accomplish this task.

Ankara considers the PKK a terrorist organization, regarding the Syrian Kurdish Democratic Union Party (PYD) and its paramilitary group, the People's Protection Units (YPG), as its affiliates.

"Our hope is that Iraq will complete the operation there thoroughly. If there is a problem achieving this goal, we will conduct our bilateral meetings and be the ones who will do what is necessary in Sinjar," Erdogan said as quoted by Hurriyet Daily News.

© AP Photo / Bram Janssen
Turkey Accuses US of Failing to Monitor Its Arms, Helping PKK
The PKK established its control over the town in 2015 after expelling Daesh (ISIS/ISIL)* from the region which the terrorist group had seized from the Yazidis in 2014.

Baghdad has repeatedly signaled its opposition to Turkey's potential intrusion, stressing that such an action would prompt a response from Iraqi forces, being a violation of the country's sovereignty.

For its part, the Kurdistan 24 news broadcaster reported on March 23 that the Kurdistan Communities Union (KCK) Executive Council Co-presidency, the PKK's umbrella group, announced the group's "guerrilla forces" withdrawal from Sinjar after the defeat of Daesh.

Speaking to Sputnik on April 4, Mehma Xelil, the head of district state administration of the Iraqi town of Sinjar, revealed that PKK militants had left the town on April 1.

"The government of Iraqi Kurdistan, Baghdad and the people of Sinjar demanded that the PKK leave the territory of the city and we are grateful that they have complied with the demand," Xelil underscored, adding that "the exact number of PKK members who have retreated hasn't been estimated."

© AP Photo / Bram Janssen, File
Baghdad Will Respond to a Turkish Anti-PKK Ground Operation in Iraq - Official
It is not the first time Turkey has entered Iraqi territory under the pretext of counter-terrorism efforts. Thus, it was reported on March 11 that Turkish warplanes destroyed 18 PKK targets in a series of raids across northern Iraq over the weekend.

In general, over the past few months airstrikes by Turkish aircraft have killed dozens of PKK militants in northern Iraq. Ankara has been involved in the struggle against the group since 1984. The PKK was founded in 1978 by Abdullah Ocalan with the aim of creating an independent Kurdish state.