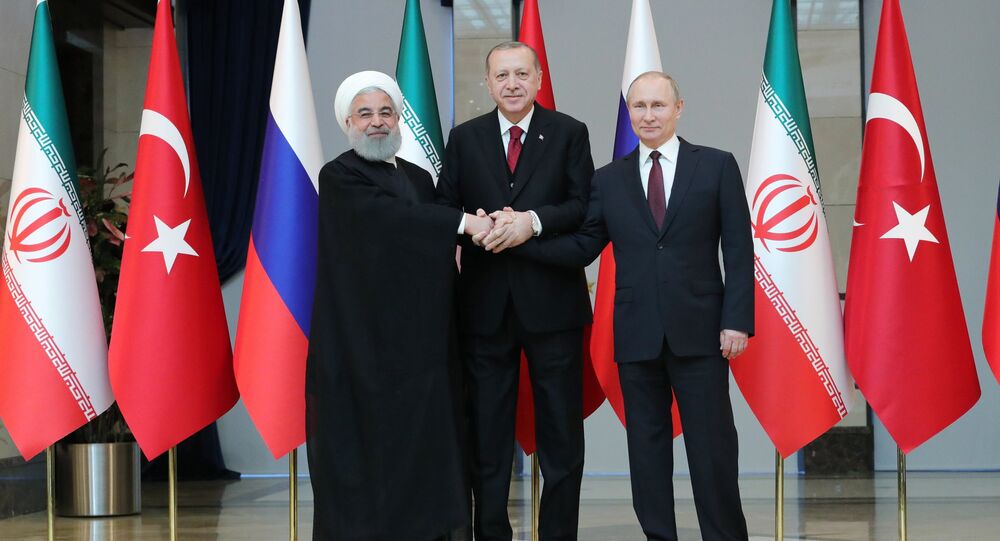 The Ankara summit, which brought together the leaders of Turkey, Russia and Iran on April 4, signaled the countries' commitment to Syria's territorial integrity, sent a message to US-backed Kurdish forces and dealt a blow to Western countries' effort to exert psychological pressure on Moscow, Ankara and Tehran, Turkish analysts told Sputnik.

The recent trilateral summit between Russia, Turkey and Iran in Ankara has yet again demonstrated that the US-led coalition's efforts to dismember Syria are doomed to failure, Turkish analysts told Sputnik.

"This summit has dealt a heavy blow to Western countries' Syrian policy — with the US pulling strings — and has openly demonstrated to them that they will not be able to implement their plans in Syria," Hasan Unal, the head of the department of international relations at Atilim University in Ankara, told Sputnik Turkey. "The US, France and the UK and their allies have pursued the goal of dividing Syria into two or three parts from the outset. To accomplish this task they first used Daesh [ISIS/ISIL]* and then the Kurdish Democratic Union Party (PYD). However, the summit indicated that Western countries are not destined to succeed."

The academic pointed out that the Turkish and Iranian press called the summit "very successful." According to Unal, the major reason behind this is that the three states managed to reach an agreement on issues of Syria's territorial integrity and sovereignty and the necessity to fight all terrorist organizations on the ground without distinctions of any kind.

"The timing of the meeting was symbolic," the Turkish academic pointed out. "It took place at the moment when Turkey successfully completed Operation Olive Branch regardless of a massive psychological attack from Western countries. The summit indicated that Turkey is a member of a new influential alliance in the region."

© AP Photo / Hussein Malla
US Sends Mixed Messages on Presence in Syria as More Jihadists Pledge Loyalty to Baghdadi
Ulan underscored that the summit's significance for Russia and Iran could hardly be overestimated.

"We see how [Western countries] are trying to exclude Russia… from global political processes, under the pretext of the Skripal case; we [also see] how tensions are growing between Iran and the US every day," he said and reiterated that under these circumstances the Ankara summit has turned out to be an important and successful move.

Unal does not exclude that US President Donald Trump may deliver on his promise and pull US troops out of Syria in the near future. The academic suggested that there could two scenarios — either the US would directly confront Turkey in Manbij, which could lead to a global conflict and a NATO crisis, or Washington would turn its back on the PYD and give up its plan to split Syria up. Unal believes that the second option is the most probable one.

© AP Photo / Hussein Malla
A U.S. soldier, left, sits on an armored vehicle behind a sand barrier at a newly installed position near the tense front line between the U.S-backed Syrian Manbij Military Council and the Turkish-backed fighters, in Manbij, north Syria, Wednesday, April 4, 2018

Oytun Orhan, a specialist on the Middle East at the Center for Middle Eastern Strategic Studies (ORSAM), echoes Unal by saying that the Ankara summit is likely to facilitate the resolution of the Syrian crisis.

Both Orhan and Unal noted that the Astana meeting has sent a strong signal to the US-backed Kurdish militia. According to the analysts, Kurdish self-defense units pose a challenge to the territorial integrity of Syria, which obviously plays into the hands of the US.

"In the near future Turkey will fight against Kurdish forces in the territories under US control. And here, Ankara will be supported by Iran and Russia," Orhan stressed.

For his part, Unal suggested that the PYD and the Kurdistan Workers' Party (PKK) are facing difficult times: "As far as I understand, judging from information received from Tehran, the PKK will be targeted in both Syria and Iraq. In the future, an operation against the PKK could be conducted both in Sinjar and in Qandil."

"The alliance of Turkey, Russia and Iran originates from the Astana process," Orhan said. "In the course of the Astana process, which was largely focused on military issues, the sides have made a serious progress in this specific sphere. A ceasefire agreement was reached, de-escalation zones were formed and the situation in the war theater became noticeably calmer, while important positive developments took place in terms of building trust between the central Syrian government and moderate opposition."

© AFP 2021 / BRENDAN SMIALOWSKI
Russian Embassy Slams US State Dept. Statements on Astana Syrian Peace Process
According to Orhan, these developments will also be discussed within the Geneva format. In particular the issue of a new Syrian Constitution is likely to become the focus of attention, he noted.

"It's about how the new political structure of Syria will look like, what will be the powers and duties of the head of state and the government," the scholar explained. "In the future, a compromise achieved in this sphere will lay a solid foundation for the Geneva negotiation process, which will be joined by other players."

The Astana format was kicked off by Moscow, Ankara and Tehran in December 2016 as a platform for Syrian peace negotiations between the government and opposition forces. Within the new peace format, Turkey, Russia and Iran brokered a nationwide ceasefire plan for Syria. The UN hailed the political effort.

© AFP 2021 / STR
Pro government forces check tunnels used by the rebels over the past years during the siege in the recently conquered area of Jobar, in Eastern Ghouta on April 3, 2018

According to the Turkish scholar, the formation of observation posts by Turkey in Idlib will positively affect the overall situation in the regional war theater. As for Manbij and the territories east of the Euphrates River, Turkey is likely to increase its influence in the region due to the support of its allies, Russia and Iran, he suggested. Besides, the three countries are likely to continue to provide humanitarian assistance to Syrian civilians, Orhan underscored.

On April 4, Russian President Vladimir Putin, Turkish President Recep Tayyip Erdogan and their Iranian counterpart Hassan Rouhani, the guarantors of the Astana peace process, took part in the second trilateral meeting on Syria in Ankara. After the meeting the leaders of the countries adopted a joint statement on the Syrian developments.

"I would like to point out that the Joint Statement emphasizes the firm resolve of Russia, Iran and Turkey to help strengthen the sovereignty, independence and territorial integrity of the Syrian Arab Republic, as my colleagues have said," President Putin stated at the joint press conference.

Analyst Reveals Consequences of US Contradictory Messages in Syria