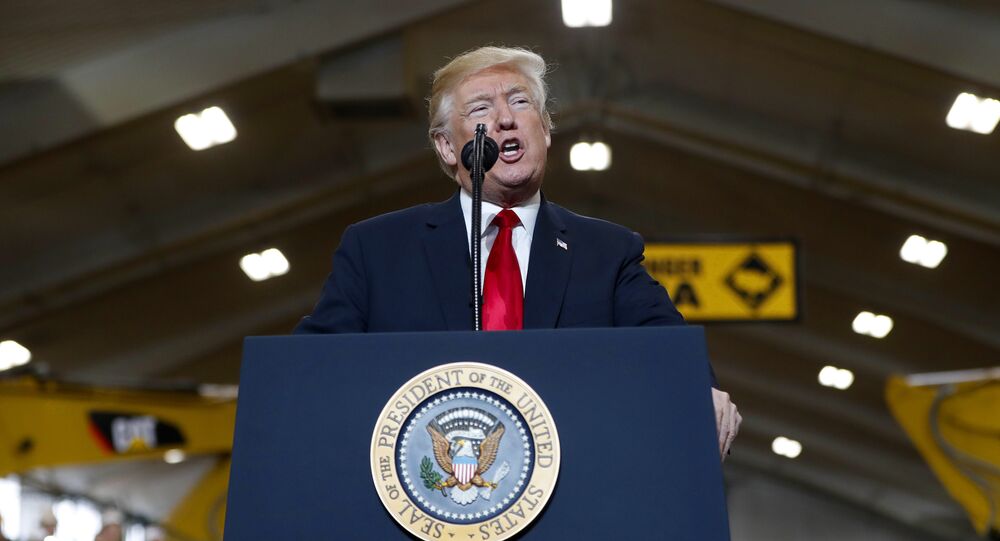 US President Donald Trump has denied that the US and China are engaged in a trade war. His comment comes as Beijing has announced that it would levy 25% import tariffs worth $50 billion on 106 American products. Sputnik discussed this with Stuart Orr, Professor at the Faculty of Business and Law, Deakin University.

Sputnik: Many analysts have said that despite what President Trump has been stating, the US is not in a trade war with China, the recent measures from both countries indicate contrary to this, in fact, a trade war seems to be starting in front of our eyes, what's your thoughts on this?

Stuart Orr: I think that both parties are testing out the other's mettle, China is in an expansionist mode and trade barriers, one of it's major trading partners, 25 percent of its total exports go to the US. Any barriers to that trade is going to significantly impact on that, so China can't afford to step back from that, and there's a similar problem for the US as well in terms of imports availability to the US from Chinese products, but the interesting thing is, of course, that neither party can afford to go too far, so they're having to choose strategic barriers that are going to have the greatest impact on the other party without closing the doors too much to their own trade. So, yes, that's definitely going to be the case, I think if they'd opened it up broadscale import tariffs then there would've been a lot of problems with managing that as well as having significant impacts on the economies of both countries.

Sputnik: Now do you think there's a chance that tensions will decrease between the two nations or will there be more tariffs?

Stuart Orr: I think we're likely to see more tariff being put on the board, but tariffs and trade barriers are interesting things, there are a number of different dimensions to them, the date of implementation is one way in which these things can be manipulated, there is also the control systems, for example, China has 14 special economic zones to which these trade restrictions won't supply, so this provides another entry point into China, there's also the issue that neither country is really able to control the trade that comes through the international mail system, there's quite a degree of flexibility in the impact that such trade barriers have, so, on one hand, they can be put up as a statement, but on another hand the impact can be a bit different.

Sputnik: One of the most powerful weapons in Beijing's trade arsenal is the specific product of the soybean, is China going to target it? And if so, what consequences could this have?

Stuart Orr: I think this is a very serious one and unlike some of the other items targeted it's serious for both parties, because China really needs that product in a serious way as a raw material input and the US really needs it as an export product, whereas for a lot of the other products there are other suppliers, there is more opportunity to move, and it's more about balance of payments but in this case it's a fairly serious item, and I think that both will stay clear of that unless they get pushed into a corner, I think this will be held in reserve as a very serious thing but it will certainly transform what is a process of threat into a very real economic impact.

Sputnik: We have a president that comes in as a first time president with no political experience, he's obviously got imbedded business knowledge depending on what your point of view is, he's obviously taken the stance "America first," protectionism, he's trying to bring wealth back to the American population, it is having an adverse effect in terms of the global audience's attitude, the general consensus from the global audience is they don't particularly like his stance, what's your take on this particular situation?

Stuart Orr: He's very focused on bringing the economy into order in the US, in terms of that I think some of his trade war is actually going to not just hurt the population in general but is going to seriously affect the competitiveness of US industries and that's going to take some of the heat out of the growth of the economy, and that's going to create problems as well as political problems for Trump. The lack of the increased input costs is the result of the tariff barriers and possibly even shortages of supply is going to seriously affect a number of US industries, particularly, the technology and electronics industry, so that's an at home issue which is obviously, very significant for him, and there's also the global aspect as well, and this has a serious impact upon assets, upon trade, and upon FDI, and I think it's the first time we've seen a real flow out into the global economy of some of these actions, and that's a very significant thing, I think that generally in an environment where there is some strong indicators of another possibility of a financial crisis, these sorts of stimulus can create the instability that could lead to these problems and that's a real source of concern.

Stuart Orr: I definitely think we are facing a continuation of hostilities, whether it blows out into a full trade war will really depend upon how long this has dragged out and how incremental the steps are, it's a two-stage process really, but my real concern about it is what will follow on from the trade competition that we have going on at the moment, and whether that will escalate some even more serious activities.

The views and opinions expressed by Stuart Orr are those of the expert and do not necessarily reflect those of Sputnik.