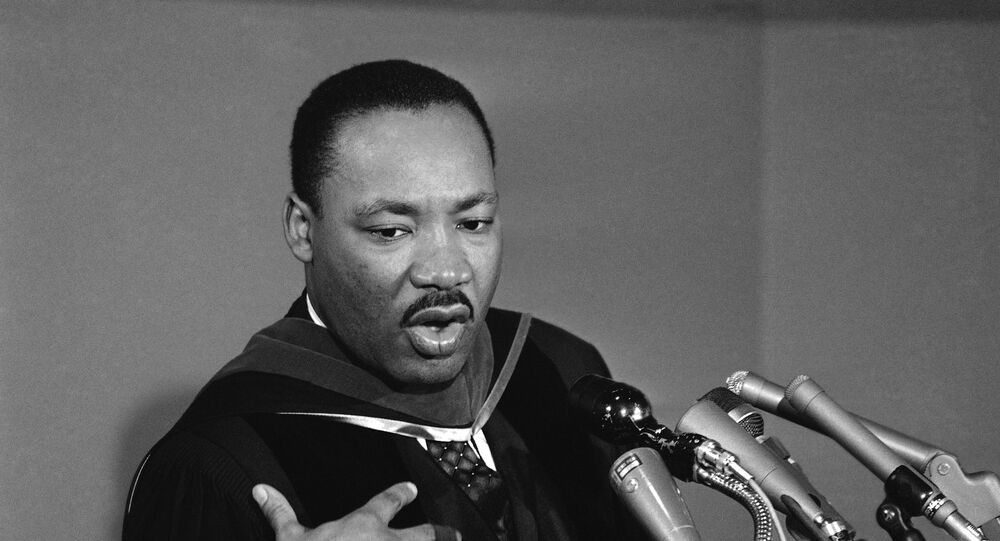 A new book based on thousands of FBI documents details how Ernest Withers was an FBI informant for over a decade, spying on the civil rights movement and reporting back to the Bureau, all while taking iconic photos of Martin Luther King.

Withers’ photographs captured some of the most important moments of the civil rights era including Martin Luther King Jr. riding on one of the first integrated buses in Montgomery, and the blood seeping into King’s motel room immediately after his assassination. Withers was renowned and respected in the civil rights movement, but the whole time he was helping the FBI.

His photographs of civil rights activists often ended up in FBI files, to help them identify different people and groups within the movement. Withers also passed on intelligence about who he considered to be dangerous and who were peaceful activists, helping the Bureau prioritise their targets. Perrusquia even suggested that Withers may have been a kind of double agent, helping steer the FBI away from certain figures in the movement.

Spying on the Civil Rights Movement

Perrusquia told Sputnik that Withers, “Was valuable to the FBI in several ways. First and foremost was his access. As a former beat cop on Beale Street and a popular studio photographer, he knew everyone in black Memphis. The FBI tapped his knowledge to catalogue the movement here. He filled FBI dossiers with a broad range of detail: identification photos, home addresses, names of relatives and associates, auto tags and phone numbers.”

This raw information was used by the Bureau to map out the civil rights movement by running those phone numbers through contacts at the telephone company to conduct what Perrusquia called “warrantless searches of toll charges”. This enabled the FBI to work out who a target was associating with, and to develop a full picture of the contacts and connections of numerous individuals in the movement.

Perrusquia went, “As Ernest's reputation as a frontline civil rights news photographer grew he became widely known and trusted. This gave him access to movement leaders and entrance into strategy meetings and behind-the-scenes conversations.” This increased Ernest’s value to the FBI, and saw him meet with them at least once a month – sometimes as often as once a day – to pass on the latest information.

As the FBI saw it, their role was to contain these radical and progressive movements, especially where the civil rights movement combined with the peace and labor movements to oppose the establishment. Perrusquia explained, “Additionally, as wings of the movement became more militant in the mid- to late-1960s, and as the peace and labor movements grew, his access helped the FBI infiltrate a range of ‘extremist’ organizations including the Black Panthers and the Young Workers Liberation League, a Communist Party youth organization.”

Why Did Withers Do It?

Perrusquia, a long-time Memphis journalist, also outlined why Withers did this, noting that the FBI paid Withers over $20,000 between 1958 and 1976. He elaborated, “While not a huge amount, it is substantial. The FBI paid most of its informants nothing in that period. The FBI has also acknowledged that in 1968 it had five paid informants reporting on the racial strife here. So he was only one of five in this city getting paid.”

The money, the equivalent of around $150,000 in today’s money, “wasn't getting him rich,” but with eight children to feed, “it helped… So, income, I think, was a primary motive. In fact, my original source on this story, a retired FBI agent, told me flatly, ‘Ernest was in it for the money’.”

However, Perrusquia made it clear that money was not Withers’ only motive and that he was older and more conservative politically than many of the activists he informed on. Withers served in the Army during World War II, and then worked as a policeman for three years after the war before being thrown out due his role in an alcohol bootlegging scam. Perrusquia explained, “He didn't go for some of the more confrontational measures. This was especially true of the peace movement. Ernest was heavily invested in the military in the 1960s; he had three sons in the service then, one in the front lines in Vietnam.”

Indeed, Withers always wanted to be a policeman, helping to weed out the bad guys, and Perrusquia believes this is another likely reason for his nearly 20-year association with the FBI, saying, “Ernest may also have been motivated by his long ambition to be a cop. He served briefly as one of Memphis' first African-American police officers. After the civil rights era waned he also served briefly as a state of Tennessee liquor agent. Sadly, he lost both of those jobs because of his involvement in corruption scandals.”

The FBI’s aim was not law enforcement, as Perrusquia explained, “The government wasn't trying to prosecute anyone in the vast majority of these cases.” Instead the FBI was looking to “contain individuals it considered subversive or dangerous,” and “Many individuals were hurt or jeopardized in these operations.” Perrusquia gave the example of Bobby Doctor, a civil rights activist who started working for the government’s Civil Rights Commission, so the FBI investigated him as a security threat.

© Photo : Wikipedia / Dick DeMarsico, World Telegram staff photographer - Library of Congress
FBI Attempt to Shame Martin Luther King into Suicide Revealed
Using information from Withers and other informants the FBI put together a file on Doctor concluding that he was, “too sympathetic to the Black Power movement. Agents delivered a file on his activities to his bosses and he nearly lost his job.”Withers also gave information to his handlers suggesting Doctor was having an extramarital affair, while simultaneously informing on one of Doctor’s co-workers at the commission, Rosetta Miller. In Perrusquia’s view, “These efforts to undercut sympathizers and supporters of the Black Power movement were not unlike the McCarthyism of the 1950s.”

Withers’ betrayal extended to some of his good friends, including Kathy Roop Hunninen, an activist who had marched against the Vietnam war and opposing segregation. Withers had taken the photos of her wedding, but behind her back passed photos of her and information about her political activities to the FBI, leading to a lengthy investigation. As Perrusquia explained, “Years later, that investigation came back to haunt Kathy. In fact, she lost her entire career.”

After Hunninen got a PhD in environmental science she went to work for the federal government but, “A routine FBI name check uncovered the previous investigation of her in Memphis. The government pushed for a full field investigation. When Kathy, then a probationary employee, balked at that she was fired. She sued and won her job back. But the case dragged on for over a year, the government determined to do a full field investigation, an intrusive measure that involved interviews of past employers, neighbors, friends and associates, even though her job had no national security implications. Frustrated and worn down, Kathy eventually quit.”

Marc Perrusquia is the author of A Spy in Canaan: How the FBI Used a Famous Photographer to Infiltrate the Civil Rights Movement.

The views and opinions expressed by Marc Perrusquia are those of the speaker and do not necessarily reflect those of Sputnik.