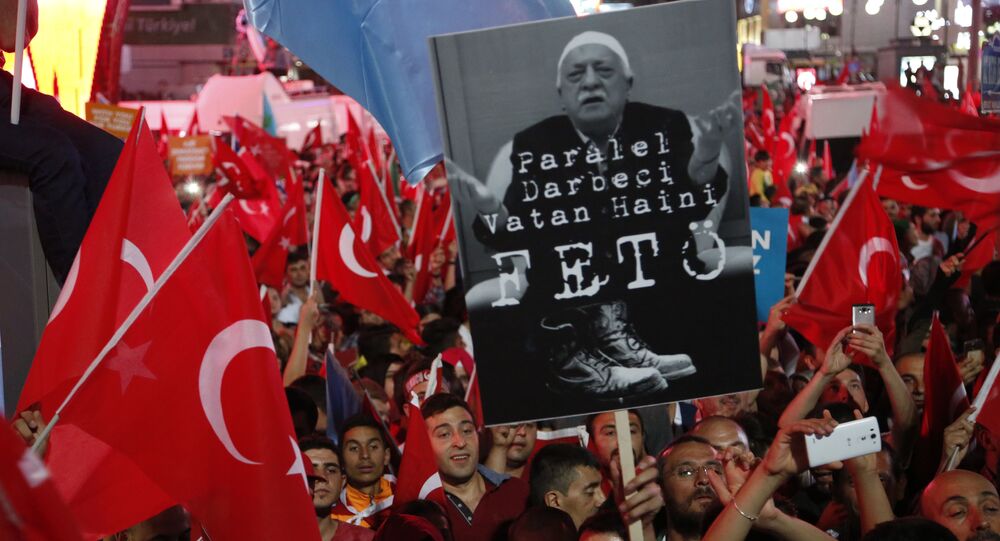 A Turkish court has issued arrest warrants against US-based cleric Fethullah Gulen and seven of his supporters, charging them with involvement in the December 2016 murder of Russian Ambassador to Turkey Andrei Karlov. Speaking to Sputnik, Turkish lawmakers Ahmet Iyimaya and Mehmet Metiner outlined what Washington, Ankara and Moscow will do next.

A Department of Justice spokeswoman has told Sputnik that the US would make a decision on whether or not to extradite Gulen based on a review of any documents Ankara provides as evidence. The cleric is already wanted in Turkey for the Gulen Movement's suspected role in the July 2016 Turkish coup attempt.

Speaking to Sputnik Turkey about the latest charges against Gulen and his followers, parliamentary justice commission chairman Ahmet Iyimaya said that the cleric's case has now undoubtedly taken on a broader international character. The ruling Justice & Development Party lawmaker recalled that Ankara has already sent Washington a large number of documents to support its demand that the US extradite Gulen over the events of July 2016.

"A decision by Russia to be included in this process must be made by the Russian side," Iyimaya said. "In these circumstances, the country whose interests are affected with the question of extradition may, at its discretion, become involved in the process and take steps to accelerate it,' he added.

© AFP 2021 / Natalia KOLESNIKOVA
Turkey Issues Arrest Warrant for Gulen Over Killing of Russian Envoy - Reports
For his part, AKP MP Mehmet Metiner said that it was long clear "that the Gulen Movement had something to do with [Karlov's] murder; the court's decision only confirmed this." The lawmaker said he hoped the US would take account of the Turkish court's decision, "and renounce its policy of sheltering a terrorist from justice."

"The Russian ambassador was killed by FETO terrorists on our territory. If the US does not take due notice of the decision of the court in this case, they open the way for possible terrorist attacks, and make it more difficult to prevent such assassination attempts against diplomats in the future," Metiner stressed.

According to the lawmaker, Russia too should initiate an extradition request against Gulen. "Since we're talking about the leader of a terrorist organization accused of organizing the killing of a Russian ambassador, Russia should also present the corresponding claims to extradite Gulen," Metiner said.

© AFP 2021 / ARMEND NIMANI
Turkish Intel Arrests Six Members of Gulen Movement in Kosovo – Reports
As for the US, the MP suggested that its "claims about commitment to democracy and the fight against terrorism will be rendered completely meaningless if Gulen, who organized a coup attempt, is not extradited. From this point of view, the position that the US takes in relation to the Turkish court's decision will serve as an acid test," he said.

"Russia, which carries significant political weight in the international arena, must demand that the US extradite Gulen, since this issue has moved beyond the legal and political process concerning exclusively the Turkish side, and now directly affects Russia's interests as well," Metiner noted. "We hope that Russia will demonstrate the necessary political, diplomatic and legal scruples on this issue," he added.

Russian Ambassador to Turkey Andrei Karlov was killed on December 19, 2016 by Turkish police officer Mevlut Altintas during the opening of a photo exhibition. Altintas was killed in the ensuing shootout with police. Seven others, including three police officers, were arrested in the course of the investigation.  In the days following the assassination, President Recep Tayyip Erdogan said he suspected the perpetrator of being a member of the Gulen Movement, known as Turkey as the 'Fethullah Terrorist Organization' (FETO).

'Ghost is There': Experts Warn of Organization Ankara Blames for Attempted Coup