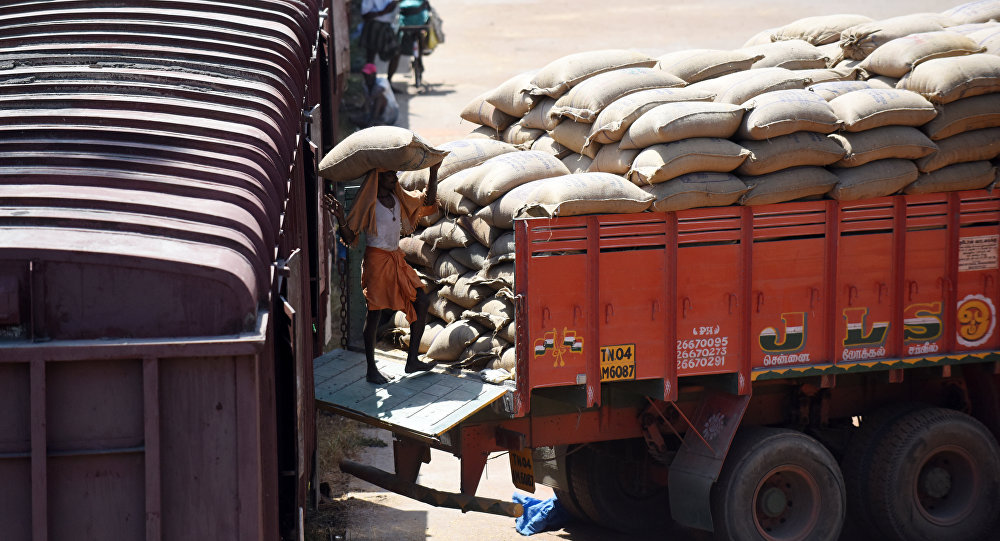 India’s food grain production has kept a steady pace with its population, but food security remains a challenge. The Bhabha Atomic Research Center (BARC), India’s state-owned nuclear research center, is now promoting food irradiation as a viable technology for containing wastage to ensure food for all.

New Delhi (Sputnik): India's food security challenge is multi-faceted but wastage of agricultural produce remains a key concern mainly due to a lack of adequate storage facilities and advanced food processing technology. The government-run Department of Atomic Energy (DAE) is now hoping to bridge this gap by promoting food irradiation. Sputnik spoke to Dr. Sunil K. Ghosh, the head of DAE's Food Technology Division, on how the country plans to adopt this technology on a mass scale and how is it going to ensure food security as well as value addition in the export chain.

Sputnik: What is food irradiation? How is it done?

DR. Sunil K. Ghosh: Irradiation processing of food involves the controlled application of energy from ionizing radiations such as gamma rays, electrons, and X-rays for food preservation. Irradiation works by disrupting the biological processes that lead to decay in food. Ionizing radiation interacts with water and other molecules that make up the food and the living organisms thereon. The direct interaction of radiation and radiolytic products of water impair the reproducing capacity of microorganism and insects. Some biological processes, such as the sprouting of tubers like potatoes, garlic and onions, get inhibited, resulting in increased storage life.

READ MORE: Russian Biologists Destroy Cancer Cells by 'Putting Them on a Diet'

Sputnik: How popular is this process in the context of the Indian Agri market?

Dr. Sunil K. Ghosh: The indigenous food irradiation facilities in India have an immense commercial prospect. In India, irradiation processing of food has been undertaken both for export and domestic markets. India is well known for its export of basmati and non-basmati rice, spices, seafood, meat, and poultry, and to some extent onions. Irradiation processing can be used for restructuring costs of bulk commodities in export markets, and for selling value-added packaged commodities directly in retail markets. India has one of the world's largest domestic markets. Huge quantities of cereals and pulses and their products, fruits and vegetables, seafood and spices are procured, stored, and distributed throughout the length and breadth of the country. Radiation processing can be used for the storage of bulk and consumer-packed commodities for retail distribution and stocking.

Sputnik: Where are the plants located in India?

Dr. Sunil K. Ghosh: The Department of Atomic Energy (DAE) has set up two technological demonstration units in India. The Radiation Processing Plant at Vashi, Navi Mumbai, is a 30 MT per day capacity unit capable of delivering medium and high doses mainly for treatment of spices, dry vegetable seasonings like onion flakes, and pet foods. The Board of Radiation & Isotope Technology (BRIT) has been operating the plant since January 2000. KRUSHAK (Krushi Utpadan Sanrakshan Kendra) at Lasalgaon in Maharashtra was set up in 2002 by the Food Technology Division, Bhabha Atomic Research Centre (BARC), as a technological demonstration facility for low dose applications of radiation such as control of sprouting in onions and potatoes, insect disinfestation of cereals, pulses, their products, spices and quarantine treatment of fresh fruits and vegetables. KRUSHAK became the first cobalt-60 gamma irradiation facility in the world, outside the USA, to be certified by USDA-APHIS for phytosanitary treatment of mangoes, enabling the export of mango from India to the US after a gap of 18 years in 2007. In addition, 13 more food irradiation facilities have been designed, installed and are now in operation by private entrepreneurs/ state agencies.

Sputnik: How safe is the food preserved in the irradiation process?

Dr. Sunil K. Ghosh: Internationally, various aspects of wholesomeness and safety of radiation-processed foods have been studied in detail in the best laboratories around the world. The microbiological, nutritional and chemical aspects of radiation-processed foods have been extensively studied. None of these studies have indicated that foods preserved by radiation pose any special problems.

Sputnik: Are there any international standards on the adoption of this technology?

BeTa-Artworks
Sweet Science: Russian Scientists Come Up With Healthy 'Golden' Chocolate
Dr. Sunil K. Ghosh: In 1980, a joint FAO/IAEA/WHO Expert Committee on Food Irradiation (JECFI) reviewed the extensive data on the wholesomeness of irradiated foods collected up to that time and concluded that irradiation of any commodity up to an overall dose of 10 kGy presents no toxicological hazards and introduces no special nutritional or microbiological problems. The Codex Alimentarius Commission adopted in 1983 a General Standard for Irradiated Foods and a Recommended International Code of Practice for the Operation of Radiation Facilities. An expert group of WHO reviewed and evaluated the results of scientific studies carried out after 1980, and together with the older studies which had already been considered by previous international and national expert committees fully endorsed the safety of the technology. The Codex Committee on Food Standards of The Codex Alimentarius Commission has also revised the Codex General Standard for Irradiated Foods in 2003 that sets standards for processed foods. In addition, several scientific bodies and associations have also endorsed the safety of radiation processed foods.

Sputnik: Why hasn't this technology caught up with the market?

Dr. Sunil K. Ghosh: The adoption of this technology in the market has shown an increasing trend in present time. The probable reasons for delay in the adoption of this technology on a wider commercial scale could be associated with a) lack of consumer awareness, b) misinformation on food irradiation, preventing the utilization of a safe and advantageous process and inhibiting consumers to have a choice between alternative technologies, c) capital cost involved in setting up of a commercial food irradiation facility, d) limited number of commercial food irradiation facilities to handle the huge quantities of food and the agricultural market of India.

Sputnik: It will help save food from post-harvest losses. Will it also influence the end cost of the product?

DR. Sunil K. Ghosh: The end cost of the products will be marginally increased, but within the affordability of the consumers. The additional charge for the irradiated food products is justified and required to sustain the economic viability of the irradiation facilities. The end cost of the irradiated food commodities is dependent on the actual cost of the commodity, radiation dose delivered and quantity processed. During storage and distribution, food commodities worth billions of dollars are wasted due to several problems. On the other hand, radiation processing can be used for storing bulk and consumer-friendly packed commodities for retail distribution and stocking, saving a lot of money and aiding in an improved supply chain management.

The views and opinions expressed by Dr. Sunil K. Ghosh in this article are those of the speaker and do not necessarily reflect the position of Sputnik.

Po-210 easy to produce, can be found in food - ex-nuclear minister