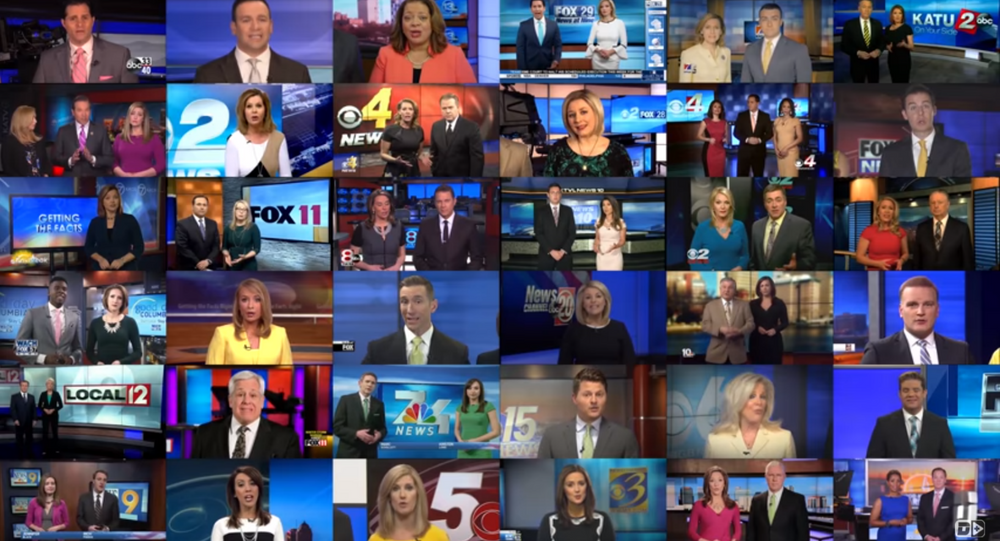 Deadspin offered the world a nugget of truth Saturday after showing the Sinclair Broadcast Group's ability to push right-wing messages to audiences of its local news stations.

The video, which has been viewed a thousand times over, shows dozens of anchors reading from a script and talking about "the troubling trend of irresponsible, one-sided news stories plaguing our country."

Though the story was initially broken by CNN in March, experts have stated that Deadspin's ability to illustrate Sinclair's tactics keeps it from being labeled "fake news."

​Speaking to Radio Sputnik's Loud & Clear, Tim Karr, senior director of strategy and communications at Free Press, explained that this behavior isn't exactly new since Sinclair has a history of using its network of local stations "to push its own political agenda."

"It's only been under the Trump administration that there's been near-perfect pairing of a news organization with a political leader who would like the media to mouth his agenda," Karr told host John Kiriakou. "[US President Donald] Trump had been tweeting in favor of Sinclair because it has a tendency to take a lot of his talking points, such as fake news, and putting them out over its network of local stations."

With roughly 85 percent of Americans trusting their local news stations over their family or friends for news updates, Karr told Kiriakou that the majority of Sinclair viewers don't even know that their favorite channels are owned by the corporation.

The senior director also pointed out that while it might not require stations to advertise its ownership, they do mandate that stations broadcast "must-run commentary."

"Commentary has included tirades against undocumented immigrants and what Trump would call fake news… it's very much in line with the agenda of the president," he said. "That's why a lot of people have come to call Sinclair ‘Trump TV'… it's sort of an unofficial propaganda outlet for the president."

With Sinclair already owning and operating major televisions stations affiliated with ABC, CBS, NBC and Univision, Karr says the group's merger with Tribune Media could give it roughly "230 stations that broadcast to more than 70 percent of the country."

When asked whether viewers could do anything to remedy the situation, Karr indicated that people should simply voice their opinion on the matter.

"There are things that you can do," Karr urged. "We've asked people to voice their opposition to Sinclair's plan to merge with Tribune Media, which has yet to be approved. We're hoping that public pressure can prevent Sinclair from getting even larger."