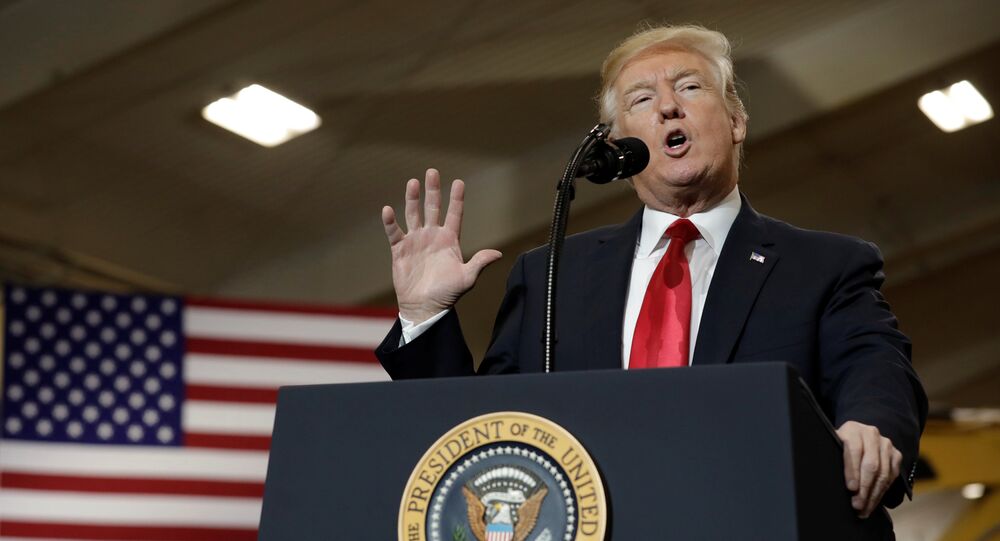 One day after going off on a Twitter tirade regarding Mexico and his infamous border wall, US President Donald Trump dished out a second serving Monday by discussing the Deferred Action for Childhood Arrivals (DACA) policy and the North American Free Trade Agreement (NAFTA).

In a series of tweets, Trump explained that "DACA is dead" because of the Democrats' failure to "care or act" about the issue and that NAFTA wasn't the greatest agreement since "Mexico is making a fortune" with it.

"He's really using this as an opportunity to further the attack on California and on Governor [Jerry] Brown," Gomez told show hosts John Kiriakou and Brian Becker, highlighting Trump's prior attack on Brown's decision to pardon five immigrants who were facing deportation. "The five pardons that [Brown] made were out of 56 pardons total."

"Trump is really using this as an opportunity, but he also doesn't understand that his rhetoric is unstable. We saw as a result of him threatening to cut NAFTA… it's having an effect on corporations' and the bankers' trust in Trump," she added.

Trump's base, Gomez pointed out, doesn't care if he rants on Twitter. "He has millions of folks that will stick by him no matter what he says, but… he definitely needs the support of other politicians in the Republican Party, banks [and] corporations that run the economy at this point."

​For Gomez, however, the incident further proved that Trump is just "an opportunist" and that politicians likely came out against him because they wanted to appeal to Latino voters.

"I think that those Republicans may have come out because, statistically, Latinos are going to make up a large majority of the population and many of us can vote," she said.

But when it comes to Trump's critiques of NAFTA, the community activist told Becker that even if the US were to withdraw from the trade agreement, Mexico could see a bright future, depending on how the next Mexican president decides to deal with the Land of the Free. Mexico is currently in campaign season, with voters are expected to elect a new president July 1.

"There's large groups of workers [in Mexico], most of them are unemployed, about 40 percent, because of NAFTA and weakened worker rights," she told Becker. "If [the new Mexican president] were to take a progressive stance and say ‘we're gonna move away from NAFTA' and ‘we're not going to further militarize the border'… I think it would be beneficial for them."

"If people in Mexico were to keep this anger they have because of Trump and Trump's threats and turn it into turning out and voting… and pushing for and demanding that they have a more progressive government, that might be an outcome… I really hope it is an outcome," Gomez predicted.