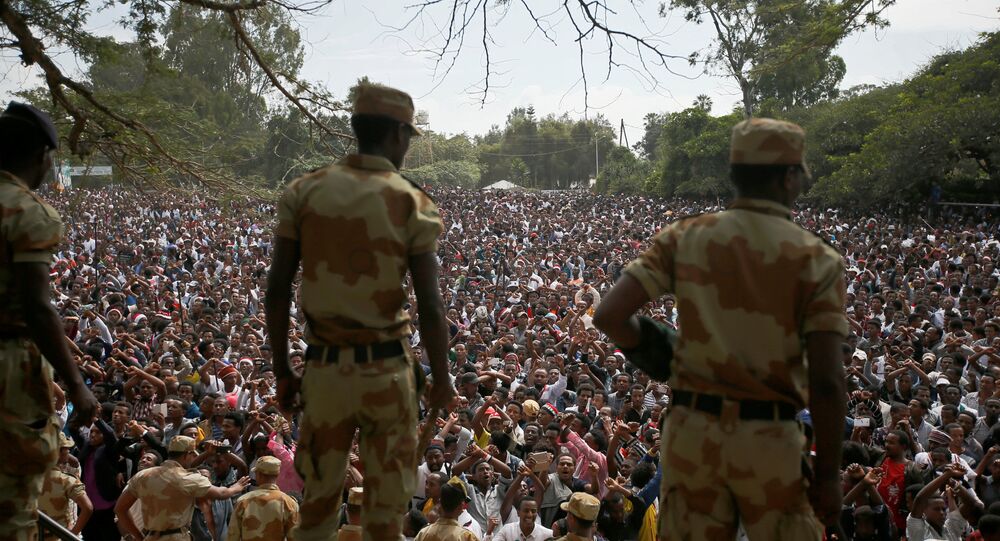 Local media reported that Ahmed won 108 out of the 180 votes from the party’s council on Tuesday, securing the position as the chairman. The EPRDF and its allies control all 547 seats in Ethiopia's parliament. The parliament will confirm the new prime minister next week.

No Changes to Political System

The election of a new chairman for the EPRDF follows Hailemariam Desalegn's resignation as both prime minister and the ruling coalition's chairman on February 15.

Dr. Fantu Cheru, a senior researcher at the African Studies Center of the University of Leiden, said that even if Ahmed was elected prime minister, he would be unable to change the current political system in Ethiopia.

"The struggle is not about electing a new leader — it is all about completely changing the entire political system in Ethiopia," Cheru said.

© AP Photo / Aris Saris
Will Justice Finally Be Served for Ethiopia’s Mengistu After Mugabe's Ouster?
Dr. Assefa Fiseha, a professor at the Center for Federal Studies at the Addis Ababa University, said that Ahmed would have to work in tandem with the EPRDF to implement reforms in the country.

"The question is whether Dr. Abiy and EPRDF will deliver as government and whether long overdue reforms will be made," Fiseha said.

Cheru went on to explain that the reason why Ahmed will be unable to alter the political system in Ethiopia is due to the nature of politics in the country, where the party rather than the prime minister leads on policy.

"He will not be able to institute fundamental changes. He will still work with the institutional parameters of a dominant one party state — the EPRDF. He will have no control over defense and security matters; prime ministers do not make policies in Ethiopia — the party makes all important decisions. He will in essence be as constrained as Hailemariam was," Cheru said.

The parties that form the EPRDF are mainly divided along ethnic lines. They are the Tigrayan People's Liberation Front (TPLF), Amhara National Democratic Movement (ANDM), Oromo Peoples' Democratic Organisation (OPDO) and Southern Ethiopian People's Democratic Movement (SEPDM). Ahmed is an ethnic Oromo, and was the head of the OPDO before the chairmanship vote.

Youth unemployment, government inefficiency and maladministration are the main issues to be tackled by both the new prime minister of Ethiopia and the ruling party, Fiseha stated.

© REUTERS / Yara Nardi
Gladiator Fights in Rome: Italian Police Clash With Migrants From Ethiopia, Eritrea (VIDEO)
"At the end of the day, responding to the youth unemployment, government inefficiency and maladministration are critical issues that need urgent response. These issues stand out there regardless of who the prime minister is," Fiseha said.

Cheru added that foreign policy would not be driven by the prime minister but by the defense wing of the government and the military.

"Foreign policy will remain the same — here again it is the military security complex that decide on the direction of Ethiopia's foreign policy, considering the bad neighborhood that the country is located," Cheru said.

What Cheru was likely referring to was Ethiopia's tense relationship with its neighbor, Eritrea. The two countries recently exchanged harsh rhetoric after the state-owned Ethiopian Broadcasting Corp. on March 17 quoted the country's police chief as saying that Eritrea had "tried to destabilize the peace and security" in the country.

Ethiopia faces another challenge to its stability: anti-government protests which arose in the Oromia and Amhara regions last year and continue up to this day. According to statistics by Human Rights Watch, over 400 people have been killed in these protests, while on October 29, the Ethiopian government announced the arrest of 245 people in connection with the protests.

Due to the unrest, Ethiopia is currently in a state of emergency, which was announced a day after Desalegn's resignation. This is the second state of emergency since the first one — instituted in October 2016 — was lifted in August. Ethiopia’s Defense Ministry issued an order on February 16, which bans public protests and prohibits speech sowing discord in the country.

Rallies in Oromia first began in 2015, after a plan proposed by the government to expand the boundaries of the capital, Addis Ababa. The protesters were farmers on the border of Oromia who were concerned that their land would be confiscated. On December 16, 2015, the plan was dropped by the OPDO.

© REUTERS / Tiksa Negeri
The Evolving Hybrid War on Ethiopia is All About China
The protests nevertheless continued over the perceived ethnic marginalization of the Oromo people, who make up 34 percent of Ethiopian population.

Fiseha pointed out that the change in the chairmanship to Ahmed, who is ethnically Oromo and will be the first prime minister from the Oromia region, was a response of the party’s council to the protests arising from marginalization in the region.

"I am not sure if the cause of the protests were merely about leadership change, though that was one source. Surely the change responds to the perception of marginalization coming from Oromia," Fiseha said.

Ahmed was elected deputy president of Oromia state in October 2016 at the height of the protests in the region.

© AFP 2019 / Zacharias ABUBEKER
Hundreds Feared Dead, Tens of Thousands Displaced in Ethnic Clashes in Ethiopia
That year, protests in Amhara, where protesters felt they were politically and economically marginalized by the dominant party in the EPRDF coalition, the TPLF, also arose.

Fiseha stressed that the protests in the Oromia region were the prime minister’s largest challenge.

"[Ahmed’s] biggest liability is stabilizing Oromia and winning the trust of other regional states," Fisehu said.

Yet even though Ahmed, who is likely to be the next prime minister, is ethnically Oromo, he will only manage to quell the protests temporarily and will unlikely bring any substantive change, according to Cheru.

Goalkeeper in Ethiopia Throws Ball Into Own Net, Acts Like Nothing Happened