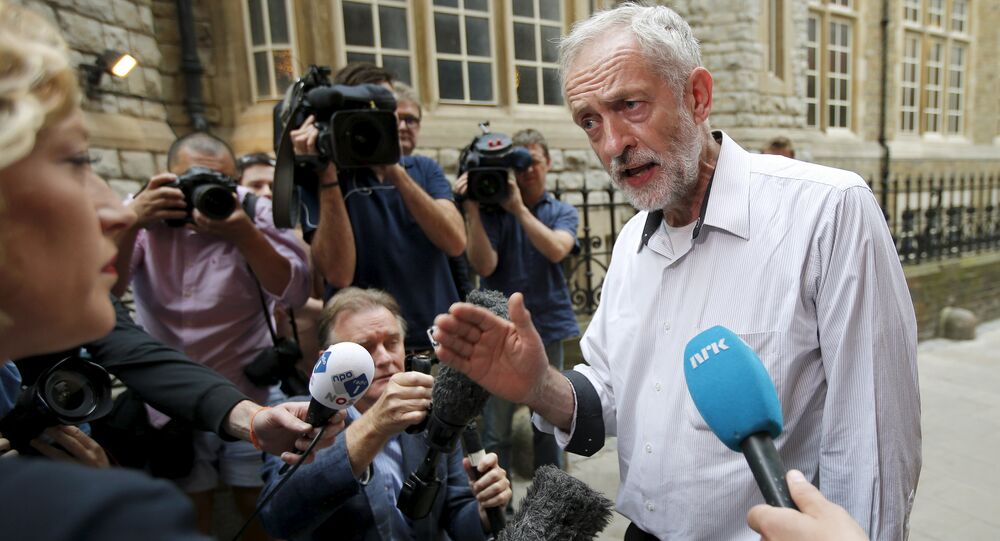 "If you are Jewish in the UK at the moment, you do feel there is a climate that is quite hostile to Jews and in general to ethnic and religious minorities across the board",- the host of Sputnik's Hard Facts John Wight spoke to writer Mary Dejevsky about the latest anti-Semitic scandal surrounding Britain’s Labour Party leader Jeremy Corbyn.

John Wight: What are your thoughts on the witch hunt of Jeremy Corbyn and the trajectory it is currently on?

Mary Dejevsky: It would seem to me that he has been treated very unfairly by the mainstream media in the UK and I am actually on record as saying that several times in columns. On the one hand I don’t support a lot of his politics and on the other hand the way his election campaign was covered and the way some of his polices are covered and more to the point at least during the election campaign the way they weren’t covered seem to me it was not a level playing field.

But then of course that rather rebounded in his favour, because he attracted a lot of the anti-establishment vote, so in a way simply by being on the one hand ignored and on the other hand vilified by the mainstream media that actually gave him additional support and I think that is one of the big reasons he did so relatively well in the last election.

John Wight: His enemies think that there are a lot of anti-Semites in the Labour Party and among his supporters and people think Jeremy Corbyn has not treated the issue of anti-Semitism as seriously as he should have.  What are your thoughts on this?

Mary Dejevsky:  I find this very difficult to judge.  If you are Jewish in the UK at the moment, you do feel there is a climate that is quite hostile to Jews and in general to ethnic and religious minorities across the board.

Because Jews in the UK have not only been successful, but have integrated very well and have felt themselves to be part of the overall community, they feel there is an upsurge in anti-Semitisms especially since the Brexit vote.  The way Jeremy Corbyn is being presented as anti-Semitic is playing into this particular sentiment.

John Wight: We have had an unremitting campaign of demonisation against Corbyn because of his policies, particular his foreign policies. What are your thoughts on this?

Mary Dejevsky: If Corbyn were to become Prime Minister and if the majority of his MP’s were behind him, then there would be significant changes in foreign policies. Some of his foreign policy stances have been picked out to illustrate and present him not primarily as a threat to UK interests but personally as a traitor and a betrayer of the national interest.

I was very surprised that immediately after the poisoning in Salisbury of the two Russians, there was a statement in the House of Commons, Theresa May announced her initial steps and then Corbyn gave his speech where he accepted that it was entirely likely that Russia was the culprit but he also said there was room for greater consideration of the facts and a bit more investigation before jumping to conclusions. In saying that, he was booed in the House of Commons including by people in his own side and he was presented in the papers the next day as a Kremlin stooge.

Now I happen to agree with Jeremy Corbyn on this and I still think that the British Government has jumped to conclusion and has put politics and diplomacy ahead of working through international organisations and conducting an investigation and the actual evidence of Russian State culpability of the poisoning in Salisbury is to my mind not proven. The British Public has not been presented with any like conclusive evidence. Corbyn has actually gone a bit further than I would go by appearing to accept Russia did it.

John Wight:  If you were Jeremy Corbyn right now what would you be thinking about your place in politics and the state of our democracy?

Mary Dejevsky: I think he’s probably made of sterner stuff.  His whole life has been of somebody campaigning against the establisment. One of the things that came out of the last election was that he is a very experienced and accomplished campaigner and this is what separated him from Theresa May. He was just much better at that part of politics.

I think he would be entirely justified in turning round and asking what does it take to be leader of a genuine opposition in the UK today.  Not an opposition that lines up behind the government against their beliefs but actually challenges the government and questions them and asks for evidence of the judgement they have reached. Now my view that is what an opposition ought to be doing. But in the current circumstances that is considered deeply un-patriotic and dangerous.

John Wight: Do you think Jeremy Corbyn will survive this period? If he doesn’t survive who do you think will take his place?

Mary Dejevsky: I have no idea what will happen next. At the moment I think he will survive, but if he doesn’t his removal as labour party leader will go through the labour party procedures. It will be an internal coo against him. There may be all sorts of actors egging the anti Corbyn labour act on from the side-lines, but if it happens it will happen from inside the party and not outside.

The views and opinions expressed by Mary Dejevsky are those of the speaker and do not necessarily reflect those of Sputnik.