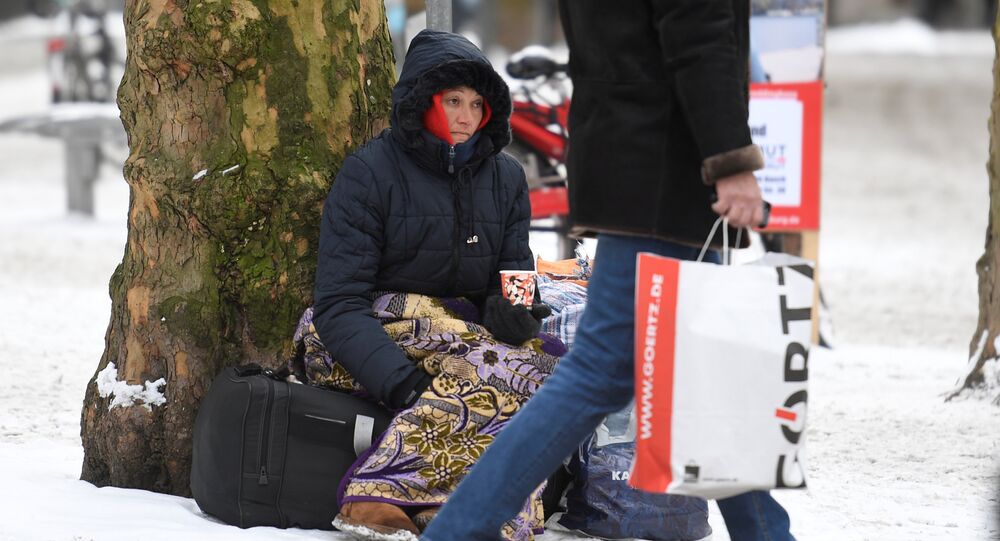 French fund Abbé Pierre has published a report stating the alarming situation regarding the rising number of homeless in Europe. The worst situation is in Germany and the UK, where, over one year, the number of addresses from people who had become homeless increased by 150 and 169 percent respectively.

Sputnik spoke with one of the authors of the report, Sarah Coupechoux.

“The past year has once again revealed that there’s another Europe that’s poorly known and if anyone knows it exists they try to forget it when don’t look down at it. It’s a Europe of the homeless,” Coupechoux said.

According to the author, a total of 11 million out of 220 million European families are without housing. When compared to last year, the number of such families increased by 17% in France. In June 2017 there were 20,845 calls to the French hotline to provide night shelters for the homeless.

© CC0
French Lawmakers to Try Homeless Life to Draw Attention to Issue
There are different methods for counting in different countries and, moreover, “there’s no unified data on the number of homeless in Europe. This social phenomenon isn’t controlled at the European level,” Coupechoux expalined.

In France those who called for a night shelter are counted. In other countries they also count those people who spend the night in homeless shelters, hotels or with their relatives or friends, the expert added.

“We’re told a lot about Germany as a country where there’s no unemployment, for example. But they’ve got a record poverty rate! The housing problem in Germany is so acute that it has become a political issue.”

According to Coupechoux, the problem has been solved only in Finland where it’s considered not as a social phenomenon but as a particular person’s problem that’s easy to solve. Between 2009 and 2016 the number of homeless in Finland dropped by 18%. But the government was also proactive: “they identified what population categories have the greatest risk of being on the street and started working with them. This refers to the young, people with household indebtedness. Assistance is provided to children, the work is carried out at prisons, hospitals etc. Accommodation has been built, wonderful parks have been made, homeless shelters turned into proper housing” – everything is in line with the «Housing First» principle when the pride of place goes to a permanent home.

“In France, there are years between the time a person lands on the street and the time when they receive social housing and often you have to start again as the person isn’t monitored in terms of medicine or being providing with assistance, etc.”

She called for the need of night shelters but alternating Interim Housing programs only “worsen the situation and don’t guarantee the right to shelter, privacy and integration into society.” Finland’s practices can be adopted by other European countries and France seems to be taking an interest in them, the expert said.

“In France, the program “Un chez soi d’abord”  is being implemented experimentally. Such experiments have been implemented since 2005, especially, in the US.” Now we can “move on to the next step,” as the experiment has worked.

According to the report's author, it’ll be more expensive to resolve the consequences of poor housing than urgent provisional measures to assist the homeless.

“Funding is being reduced. Not only in social assistance but in health care, emergency services, etc. And, of course, it refers to all of us because, first, we should help people in difficult situations and, second, because society does care how much money is being spent on the homeless assistance programs that work in France during the winter.”

The European Commission boasts that the economy has risen, but economic growth doesn’t interfere with the rise of inequality. We can still feel the echoes of the 2008 crisis and the rent increase only makes the situation worse: “The European Commission is happy about economic growth and that the economic situation may probably get better and the economy can recover from the 2008 crisis after so many difficult years… And what about the other Europe? What about those who are most vulnerable and those whose number is “only rising”?

“What we ask from the EU is to consider this phenomenon in its work. We can’t address the issue of urban construction or migration in isolation from the problem of the homeless… As it’s a case of the most helpless EU citizens,” she concluded.

The views and opinions expressed by Sarah Coupechoux are those of the speaker and do not necessarily reflect Sputnik's position.