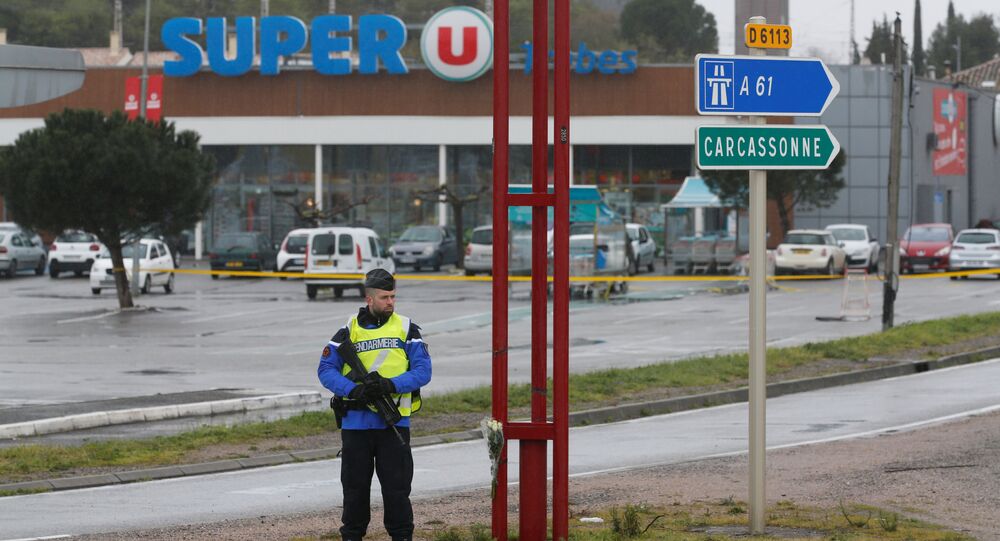 A terrorist of Moroccan origin took several hostages in a supermarket in the French town of Trebes on March 24. He killed 3 people and mortally wounded a police officer before he was shot down during a raid. Sputnik discussed the attack with Maxime Lépante, investigator for French anti-Islamization, anti-immigration organization "Secular Response."

Sputnik: The attacker in Trebes was known to French intelligence, he was on an extremist watch list. Why, in your opinion, did they not take action earlier? Who is to blame for what happened?

Maxime Lépante: Yes, this attacker was known to the French intelligence and he was on an extremist watch list, like almost all Muslim terrorists, who committed the terrorist attacks in France, since January 2015, when the French journalists of Charlie Hebdo were killed in Paris. We have right now more than 20,000 Muslim extremists on this watch list. Our police cannot put surveillance on all of them. Only a few hundred of them are followed by the security services. They are doing their best, but they are completely overwhelmed and don't have the means and the money to protect us correctly.

Maxime Lépante: Yes, that's a vast number, a frightening number and it may be only the tip of the iceberg. You have to know that Muslim terrorist attacks will continue in France. It's obvious for most of the French people with whom I speak each day. Personally I think they will increase, because Muslims continue to enter our country by the thousands each week. And people, who are to blame, are our leaders — Macron, the French President, Édouard Philippe, the Prime Minister, Gerard Collomb the Interior Minister and the people who directed and led France before them, like François Hollande, and before them Nicolas Sarkozy, Jacques Chirac and François Mitterrand — the French presidents for the last 40 years. Because they let millions of Muslims into our country.

Sputnik: It looks like the situation is somewhat out of control. In your opinion what is the best way to deal with the situation, deal with radicalization of some of the Muslims in France?

Maxime Lépante: We have to close the mosques in which imams are calling for jihad. For example, there was something very frightening — journalists working undercover infiltrated mosques in France and Germany in January in the beginning of this year under false ID and he recorded calls for jihad spread by imams in two French and German mosques calling to kill unbelievers. This is happening right now in some of the French mosques. How come our government let imams call for jihad against French people right now in France?

Secondly we have to close all Quranic schools, who work under the radar illegally and they are indoctrinating Muslim children and creating terrorists for tomorrow. And we have to stop the flow of money, coming from Saudi Arabia, Qatar, Emirates, Kuwait, Morocco, Algeria, which fund the constructions of mosques, into France.

'We Don't Want Vigils After This': Anger on Social Media Over France Attack