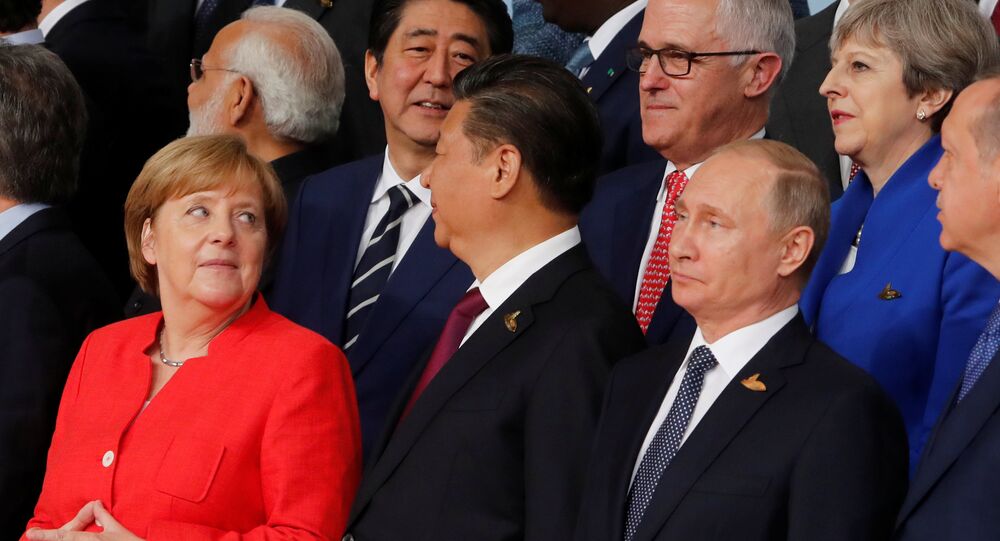 Globalists have admitted their defeat by recognizing that neither Russia nor China will dance to their tune, Sputnik political observer Dmitry Kosyrev writes.

"It seems that work has begun to revive the half-dead 'liberal world order'," the observer noted. "It will take quite some time, and it is not necessary that the United States will be its epicenter. However, this 'order' will not be global — goodbye, illusions. It will involve only part of the countries while China, Russia and some other states won't be affected [by the project]."

The observer referred to the 2018 German Marshall Fund's (GMF) Brussels Forum, citing Josh Rogin of The Washington Post. The Brussels Forum is an annual high-level meeting of influential politicians, corporate leaders and scholars from North America and Europe. The event had the eloquent title "Revise, Rebuild, Reboot: Strategies for a Time of Distrust." The organizers of the forum raised the alarm over "a decline in trust, both in domestic and international spheres."

"We lost sight of what it took to create this international order and what an act of defiance of history and even defiance of human nature this order has been. We have the capacity to push back — we just need to understand the pushback needs to start occurring," Robert Kagan, neoconservative American historian and husband of former US Assistant Secretary of State for European and Eurasian Affairs Victoria Nuland told the forum, as quoted by Rogin.

© AP Photo / Andrew Harnik
Unchartered Waters: Trump's '21st Century Mercantilism' Changes Trajectory of Global Trade
For his part, Senator Chris Murphy bemoaned the fact that US President Donald Trump is not interested in "projecting liberal values" into other countries, let alone trade liberalization. The White House's recent initiative to introduce additional tariffs on aluminum and steel imports has prompted a wave of criticism from the US' global partners and allies.

Furthermore, the US president made it clear that the US will not support numerous international institutions and withdrew from the United Nations Educational, Scientific and Cultural Organization (UNESCO).

Murphy called upon the defenders of the liberal world order to team up and "build new alliances within their societies."

On the other hand, the transatlantic bloc has seemingly recognized its failure to impose a Western-style political order on Russia and China.

© AFP 2020 / BEHROUZ MEHRI
Expert Explains How Washington Driving Iran, Russia, China Closer Together
Kosyrev suggested that the center of trans-Atlantic globalism will most likely move to either Brussels or Canada or even Australia.

However, not everything is rosy in the European garden, Kosyrev noted referring to the rise of right-wing forces in Austria, Italy, Hungary, Poland and other EU member states. Although Merkel still remains at the helm of German politics, the right-wing Alternative for Germany (AfD) entered the Bundestag in September 2017 as the third-largest party.

Given all of the above, the rebuilding of the liberal international order will take years, Kosyrev presumed.

According to the political observer, Russia and China could benefit from the inner struggle in the trans-Atlantic camp. On the other hand, he does not exclude that the West will continue its overseas operations to maintain the status quo. To illustrate his point, Kosyrev referred to Syria: While Washington has virtually no leverage to oust Syrian President Bashar al-Assad, it continues its saber-rattling, threatening Damascus with a massive strike.

The failure of globalism means the further rise of a multi-polar order based on the principles of equality and sovereignty with its own norms and regulations, the political observer concluded.