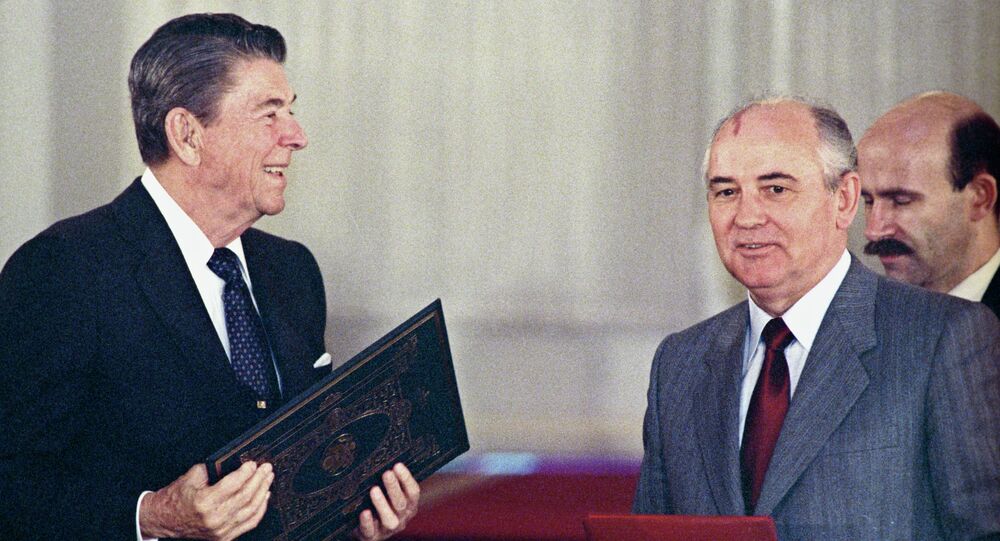 Exactly 35 years ago, then US President Ronald Reagan officially announced the launch of the Strategic Defense Initiative (SDI) which envisaged the development of a wide array of advanced weapons systems, military observer Vadim Saranov writes for Spuntik, shedding light on who in reality had won "Star Wars."

"This was the strangest military project in history," the military observer opined. "Some experts consider the SDI to be the greatest bluff, others — a failed attempt to conduct a technological breakthrough."

In 1984 the Strategic Defense Initiative Organization (SDIO) was established within the US Department of Defense to supervise the ambitious project. The organization studied the potential capabilities of laser and particle-beam weapons, while a network of ground-based and space-based systems, including myriads of satellites, was meant to create an invulnerable shield over the country.

© CC0 /
Star Wars Coming? Trump Considers Creation of US 'Space Forces'
The famous Brilliant Pebbles ballistic missile defense (BMD) system proposed by US scientists in 1987 envisioned that thousands of small missiles would be placed into orbit and collide with the adversary's intercontinental ballistic missiles (ICBM) in the event of attack.

Naturally, the US adversary in question was the USSR, Saranov underscored.

Although Reagan's Star Wars project looked unreal, the Soviet leadership took the program seriously. A commission led by academician Evgeny Velikhov examined the issue and came to the conclusion that the Americans had neither economic nor technical opportunities to fulfill the bold project at the time.

"The SDI was based on risky scientific research with an unknown result," Viktor Murakhovsky, editor-in-chief of Arsenal of the Fatherland, a Russian military magazine, told Sputnik. "Calculations and experiments were really conducted, but the statements that the US is about to create such systems were nothing but a bluff."

Saranov noted that some observers still believe that the USSR took the bait and joined the arms race which dealt a heavy blow to the country's economy. He noted that some regard the Soviet orbit laser cannon Skif as a sort of response to Reagan's Star Wars. However, Murakhovsky denied the assumption.

"Soviet projects of space weapons system were in no way connected with [Reagan's] program," the scholar underscored. "We had started developing laser and kinetic weapon systems before the launch of the SDI."

© Sputnik / Vladimir Fedorenko
Launching an RS-20 Voyevoda (SS-18 Satan) intercontinental ballistic missile (File)
US Government
Star Wars: Why US, Russia, China Make a Big Deal Out of Hitting Satellites
However, the SDI project facilitated the development of the USSR's promising arms projects, Saranov emphasized: "In August 1983, the modernization of the strategic missile complex R-36M "Voyevoda" (NATO reporting name SS-18 Satan) was launched," the military observer recalled. "The upgraded version of the R-36M2 missile was equipped with additional protection for combat blocks from lasers and kinetic weapons."

According to Leonid Ivashov, head of the Academy of Geopolitical Problems, a Moscow-based think tank, the USSR's response to the US-led Star Wars initiative was "strong" and "powerful."

"We triggered the development of new technologies in the sphere of air defense and anti-space defense, boosted the capabilities of Voyevoda, and created the potential which still bears fruit. Americans hoped that we would fall behind, but when they saw that the USSR was surpassing them in more than fifty technologies, they were forced to halt the program," Ivashov opined.

However, the US space war concept has not become a thing of the past. Last week, US President Donald Trump signaled his willingness to create a "Space Force" to fight wars in space.

"Space is a war-fighting domain, just like the land, air and sea," Trump said in San Diego on March 13, addressing US military servicemen. "We may even have a Space Force, develop another one. We have the Air Force, we'll have the Space Force."

US Government
Star Wars Boondoggle Again? Congress Seeks to Revive Space Missile Defense
Ivashov believes that the US is seeking to bolster its potential military capabilities in space because the Americans are currently outpacing Russia and China in this sphere. According to the analyst, Moscow should not join the race.

"We must act differently," Ivashov suggested. "[We] should offer a broad international cooperation in space research and promote the issue of the demilitarization of outer space, and ban the launch of nuclear weapons and strike systems into orbit."

Russia has repeatedly advocated for space demilitarization. In September 2017, Russia and China presented a draft treaty on the prevention of the deployment of weapons in outer space. However, their Western counterparts turned a deaf ear to the initiative, Saranov remarked.