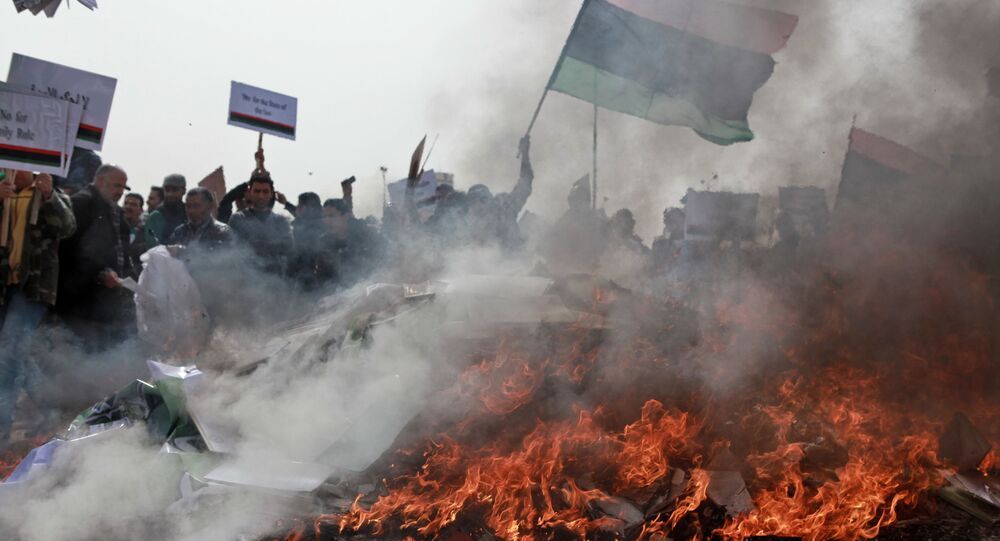 Avaaz, a US-based 'cyber-activist' civic organization, is reported to be behind the campaign encouraging the boycott of the upcoming FIFA World Cup 2018 in Russia. Francesca Totolo, an independent Italian journalist, spoke with Sputnik about the issue.

Sputnik: What is your take on the content that Avaaz has been sending, in light of the situation in Syria?

Francesca Totolo: Since 2011, Avaaz has been supporting the Arab Springs, both the North African ones (Tunisia, Libya and Egypt) and the Middle East, with a particular financial commitment to the situation in Syria. Everything is documented in his financial reports.

© AP Photo / Ben Margot
America’s Own Arab Spring? The Dire Threats of Getting Rid of Donald
Avaaz, like the main European and American mainstream media, is trying to influence public opinion to justify a "regime change" in Syria, a nation that did not want to align itself with the globalist policies of the Western powers.

So the enemies of Avaaz are President Assad, his army, and Russia, which is helping Syria liberate the areas occupied by terrorists.

Sputnik: Some experts have said that the information spread by Avaaz was issued by fake bots, do you agree with that?

Francesca Totolo: The use of fake bots is now a custom in the spread of propaganda in Western countries. To understand that Avaaz probably uses fake bots, just look at its Twitter account: almost 1 million followers despite having fewer than 100 retweets.

So it is not unthinkable that the same fake accounts are used for information spread by Avaaz.

Sputnik: The information spread was also regarded as fake news. Now a recent report stated that fake news reaches users faster than real news and is more likely to share, in your opinion what consequences can this have on the news in general?

Francesca Totolo: The fake news conveyed by both the press and social networks reaches a large number of people, but I think that the reader, in most cases, can understand what the truth is.

Sputnik: The campaign is calling for the boycott of the FIFA world cup, that is scheduled to take place in Russia this summer, causing some analysts to say that such measures damage world sports, what is your take on that?

Francesca Totolo: I do not think it is a coincidence that Avaaz's petition to boycott the FIFA World Cup in Russia was published 4 days before the presidential elections and coinciding with the Sergei Skripal case. Avaaz, I guess, which does not care about world sports, has decided to media attack Russia in a moment of vulnerability. Certainly, the final offensive of the Syrian Army of Assad against the terrorist stronghold of East Ghouta has not made the American organization happy either.

Sputnik: Washington has openly spoken about planning airstrikes on Syria; why isn’t the Western media condemning this and why are no campaigns being launched?

Francesca Totolo: It seemed that the United States had definitively abandoned their support for the rebels in Syria, leaving the Kurds alone to fight in Afrin against Erdogan's Turkish army. But no, the Syrian question is too important for the Americans and they have threatened an air strike.

The Western mainstream media will never condemn U.S military action because everything is justified by "the export of democracy and human rights."

Sputnik: What aims do campaigns like the one launched by Avaaz hope to achieve?

Francesca Totolo: The purpose of the organization, founded by George Soros, mirrors that of the Western globalist powers: to discredit Russia in the face of public opinion.

Russia has become a bulwark of nationalism, patriotism, traditional values, and the family, for example. All the values that globalism would like to eliminate because they are the antithesis of the eradication of the roots of citizens.

Sputnik: Russia has already stated that the massive propaganda attack that is being carried out by the mass media undermines the efforts of a peaceful solution to the Syria conflict, what are your thoughts on that?

© AP Photo / Ben Margot
America’s Own Arab Spring? The Dire Threats of Getting Rid of Donald
Francesca Totolo: I think Russia is managing the attacks of globalist propaganda very well. The Western powers are only waiting for a mistake to be made by the Kremlin.

Without the Russian Army supporting the Syrian one, Assad would have had serious difficulties facing the attack of the "allied forces" and he would probably end up like Hussein and Muammar Gaddafi.

Sputnik: What impact could such measures have on the conflict Syria?

Francesca Totolo: US foreign policy after Trump's election has changed significantly, but Syria is still an open case for the American deep state. The propaganda against Russia on the Syrian issue, like that of Avaaz, serves to influence public opinion and therefore to call for an allied military intervention. But in 2018, people are unlikely to be influenced by such propaganda campaigns.